Alistair Leckie and Matt Outhwaite were the relieved winners of the HERO Challenge Two on 23 July after finally climbing to the top of the podium in their SAAB 900 Turbo from a field of over 90 cars. Despite winning the 2021 HERO Challenge Championship through a string of podiums, including many second places, a HERO-ERA overall win has eluded them until now. 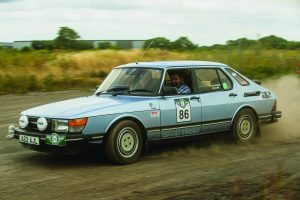 “It’s been a great day,” said a delighted Leckie on the podium. “We’ve had a really fun day of rallying and Malcolm and Anita have pushed us all the way, we really had to take the pressure right up to the last set of tests, but we thoroughly enjoyed it. It has been a great 18 months, but now we are relieved to get our first win – especially with the five-door shopping car”

Ernst and Sonja Luthi won the Rally Newcomer Award driving a HERO Arrive and Drive MGB.  The Australian couple, who had travelled to the UK to compete, were originally going to compete in their TVR until mechanics backed it into a high kerb and did a lot of damage to the rear and exhausts.

The couple nearly pulled the plug until the Arrive and Drive Manager at HERO-ERA said he could provide them with an  MGB.  “We’ve got an MGB in Australia, so that’s how we arrived at the solution,” said Ernst.  “Now we are Arrive and Drive fans!  Award winners as well, we’ve got trophies and awards, we will be back.” 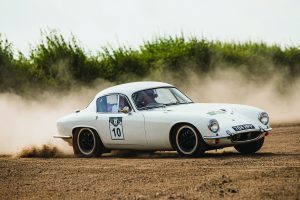