Top aviator and long-time stalwart of historic racing Tony Bianchi was recovering from an expensive and painful impact suffered at Silverstone when he had been stuffed into the barriers by a pushy competitor when the thought occurred to him and racer wife Pia that it was time for a new type of race series. It should be one that would take it back to the very roots of the sport when Guy Griffiths and Betty Haig presided at the birth of the HSCC. They wanted owners to still be able to race by then outmoded pre-1961 sports cars, whose distinguishing feature would be their use of four-wheel drum brakes. Latterly there has been little outlet for these often valuable and sometimes demanding cars to compete together in that same spirit. Furthermore, as well as the perceived risks of ‘modern’ historic racing, many owners were put off by the fussy demands of the HTP process. Bianchi believes are there are well over 100 eligible cars languishing unused. Hence the duo, in partnership with the HSCC, have launched this new series that doesn’t demand HTPs, does require drum brakes but most interestingly rejects the participation of professional drivers. How will the latter be policed we wonder? Easy they say, “What professional would want to enter a race that is declared purely for amateur owners?” After an initial successful outing at Silverstone, two further two by 20 minutes races are planned, for Oulton Park on 29-31 July, Castle Combe on 25 September and Dijon on 7-9 October. Details at www.hscc.org.uk. It is another sign that historic racing is now looking to its own past to rediscover some of the values described in last month’s ‘On The Pace’. 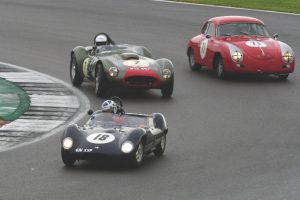