Now in its 13th year, the Grand Prix de Monaco Historique is one of the most important and popular events on the international historic racing calendar, and many said that this year’s was better than ever.  It seems a long time ago when, in 1997, the ACM decided to organise an event for yesterday’s cars during the celebrations of the 700th anniversary of the Grimaldi family.  It was supposed to be a unique event, not repeatable, but instead, given its incredible success, it was organised again three years later and repeated every two years ever since, with the exception of the COVID year.  And just as the Principality burnishes its glamorous image during the Formula 1 GP, the historic weekend becomes a meeting place for fans and collectors from around the world.  It is no coincidence that many now prefer to participate in this event, where it is not difficult to come across famous faces of motoring, rather than the more famous GP. 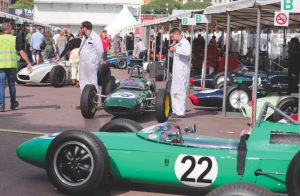 The paddocks and grandstands are regularly filled by young and old, and over the years the historic GP weekend has been enriched with two prestigious auctions, organised respectively by Bonhams and Sotheby’s.  As it should be, each edition undergoes small organisational tweaks for the sake of variety.  This year, there were eight grids, with over 200 cars, even if there were some important defections. 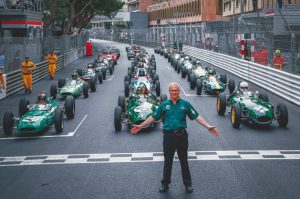 Amongst other demos and parades, in a tribute to Lotus founder Colin Chapman, 40 years after his passing in 1982, the organisers of the Grand Prix de Monaco Historique staged a lap of honour for the 34 Lotus cars entered in the various grids of this 13th edition, after a photo shoot with Colin’s son and Historic Team Lotus principal Clive Chapman.

The streets of the Principality are also a mythical place where every driver has lived his personal agony and/or ecstasy.  Claudia Hurtgen knows something about it.  In 1997 she risked saying goodbye to her driving career after a bad accident during the Formula 3 GP.  This weekend she was the absolute star of the sports car race, bringing the beautiful Ferrari 246 to victory under the gaze of an admiring public.  Two past victors experienced a really bitter weekend.  Martin Stretton, dominator of the first editions, did not get beyond the first practice session, thrown against the protective barriers at Rascasse after a misunderstanding during overtaking.  Or Katsu Kubota, who, in the Lotus 72 with which he won in 2014, seems to have a pending account with the Virage de la Tabac.   This year the Japanese ended his participation prematurely by parking the black single seater against the barriers of the famous curve. 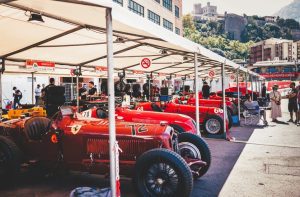 A similar fate befell Charles Leclerc, who, called in to do some demonstration laps in his hometown with the ex-Niki Lauda Ferrari, damaged the rear wing against the guardrail at Rascasse – he blamed this on a braking problem.  A little incredulous, a little mortified, the Monegasque Formula 1 driver returned to the starting line where he found Jacky Ickx ready to console him before the ritual photos. 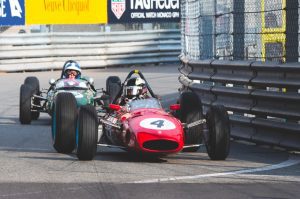 Joe Colasacco, driving the powerful Ferrari 1512 and Mark Shaw, in a Lotus 21 animated Series B with a race-long duel. Photo Peter Heil

But the historic Monaco GP 2022 was above all that of the return to normality.  On the streets of the Principality, people were out and about again in close proximity, those intent on consulting vintage magazines in one of the stalls in the city centre, those looking for a gadget with which to enrich their collection, adults intent on telling each other about everyday life or children simply engaged in eating their ice creams, as if the two years of pandemic were a very distant memory.  This, in spite of all the wonders seen in these three days, was the real added value of this wonderful edition. 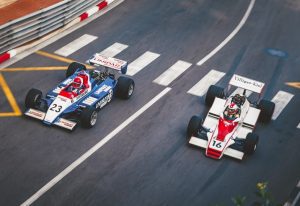 Mark Gillies and Nick Topliss in ERAs (Series A1 – Louis Chiron)  Claudia Hurtgen, driving a Ferrari 246 (Series A2 – Juan Manuel Fangio), Joe Colasacco, in the the powerful Ferrari 1512 and Mark Shaw, in a Lotus 21 (Series B – Graham Hill) were amongst the starring protagonists of this year’s event.  The sportscar class (Series C – Vittorio Marzotto) was mostly animated by the dude between Fred Wakeman in a Cooper Jaguar T38, Lucas Halusa and Guillermo Fierro Eleta, both in Maserati 300S, and the later F1 3000cc class (Series D – Jackie Stewart), Stuart Hall literally dominated the weekend, taking pole position without too much effort and flying into a peremptory victory in his McLaren M19A, winner of the 1972 South African GP. 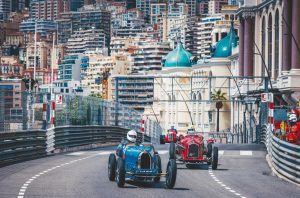 Bugattis and Alfas in Series A

Series E, for cars of the ‘70s brought together the highest number of professional drivers.  Emanuele Pirro, Roberto Moreno and Jean-Denis Deletraz represented yesterday’s Formula 1, while Marco Werner, Michael Lyons and Stuart Hall were from the world of Endurance racing. 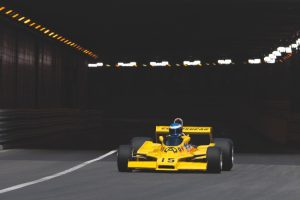 For 3-litre cars built between ‘77 and ‘80, Series F saw a good number of single-seaters that had not particularly shone in their day. After poleman Miles Griffith retired from the formation lap, Michael Lyons had no problem taking the lead, favoured by a touch at the start between the two Williams of David Shaw and Mark Hazell, which relegated them down the order before both finally retired. 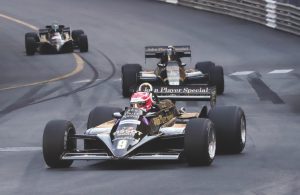 Series G for the latest cars at the meeting – up to 1985 – turned out to be a Chromecar Racing Lotus benefit, with Marco Werner, Michael Lyons and Nick Padmore on the podium in that order.

Series G podium: After last year’s contretemps when Marco Werner refused to stand on the podium, he came back in triumph this year, the Chromecar Britec team having scored a 1, 2, 3 in Lotus 87B, 92 and 88B respectively