Who doesn’t love visiting le Castellet in Provence in early summer?  The nearby beaches at Saint-Cyr-sur-Mer and Bandol are just the spot for a seafront lunch with a cool glass of rosé, followed by a short brisk but twisty drive up to the baking hot circuit. The 2022 French Historic Grand Prix at Paul Ricard on 18-19 June revisited the history of F1 and various other single-seater categories.  Once again, its impressive paddock boasted many stars including Rene Arnoux, Jean Alesi and others, chatting and signing autographs.  Éric Hélary was one of these and he was going to drive a Formula Ford for the first time in over 30 years.  Despite the regular invitation of the HSCC there was a smaller turnout of British entrants this year, no doubt put off by post Brexit hassle and expense of transportation.  It’s a shame as double races per category over the weekend meant two bites at the cherry for competitors. 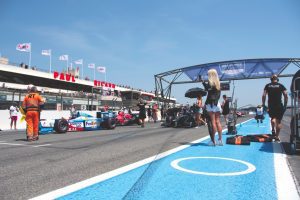 In a mostly single-seater programme, the GP de France Historique saw wins from Ingo Gerstl in his STR F1 Toro Rosso, who took the BOSS series honours, while Frédéric Lajoux and Alain Girardet shared the spoils in Formula3 classic after both front-runners, Frédéric Rouvier and Davide Leone suffered setbacks on a 30-car grid.

Classic Formula Ford fielded a superb 44-car line up of pre-1993 cars, dominated at the front by Van Diemens.  Unsurprisingly the race was tightly contested until the eighth and last lap.  After taking the lead Arnaud Dousse won in a hard fight against Mathieu Midy and Laurent Waisler, the three drivers crossing the finish line almost together.  The second, early Sunday morning, race remained undecided until the last corner.   At the head of a peloton, Mathieu Midy won this time but he and Laurent Waisler each received a 30” penalty for exceeding track limits, thus handing another victory to Dousse. 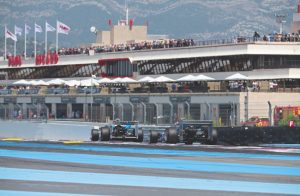 Wrigley and Kaufmann battled it out in glorious F2 race

1970s Historic Formula 1 was the blue riband event of the weekend.  With poleman Laurent Fort missing, Patrick D’Aubreby hoisted his 1976 March 761 into a commanding lead.  Behind him, the Australian Martin Bullock (Williams FW06, ex-Alan Jones 1978) and Soheil Ayari (Ligier JS21 ex-Jarier 1983) engaged in battle before the latter was forced to retire.  Bullock then seemed capable of challenging for victory, but his Williams dropped out one lap from the finish.  On Sunday morning D’Aubreby showed the same authority in the second race and gradually distanced himself from Roman, finally winning by over 25 seconds.

Twenty beautiful single seaters from before 1979 took to the grid for the Formula 2 contest.  Having taken pole at the wheel of his March 782, Briton Matthew Wrigley took the lead from the start of race 1.  At halfway, he was still ahead of the German Wolfgang Kaufmann and Laurent Vallery-Masson, but the gap was closing.  In an incredibly close finish Wrigley held off Kauffman by the tiniest of margins.  In the final race of the programme these two resumed their fight, exchanging positions several times before the halfway point.  The German finally edged ahead to take the flag and overall win by 3secs from Wrigley.

Read more in our August 2022 issue