The death of Her Majesty Queen Elizabeth II eight days before the event opened, ending a magnificent seven-decade reign, changed the 24th Goodwood Revival Meeting’s dynamic to one of all-pervading respect and admiration for the United Kingdom’s longest-serving monarch.  Set against the venue’s 1948-1966 backdrop, with union flags at half-mast above the pits and tributes from a visibly moved Duke of Richmond, the cream of the racing over three gloriously warm and sunny September days nonetheless remained sensational. 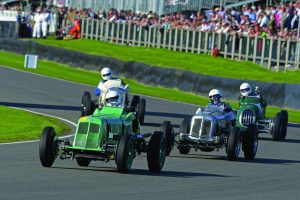 Sunday’s Goodwood Trophy included several ERAs that competed at the circuit’s first race meeting, more than 70 years previously – to the day – on September 18, 1948! After starting in P9, when Mark Gillies finally worked his way past Ian Baxter’s ex-Philip Jucker Alta 61 IS, he closed in on 2013 victor David Morris driving ‘Humphrey’ and darted ahead to win the dash to the chequer by 0.051s Photos Eric Sawyer

On reflection, the closest of the weekend’s races was also the best.  Sunday’s Goodwood Trophy, contested by Grand Prix cars and Voiturettes spanning from 1930 to ‘51, included several ERAs that competed at the circuit’s first race meeting, 70 years previously – to the day – on September 18, 1948!  From pole position, David Morris shot his two-litre R11B, which John Bolster drove to third back then, into an early lead, well aware that Mark Gillies would be charging through in Dick Skipworth’s ex-works R3A from P9 having been slowed by carburettor icing (not uncommon) in official practice. 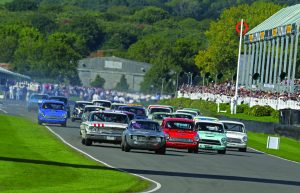 Sure enough, the Lincoln green machine was quickly in the ascendant and when Gillies finally worked his way past Ian Baxter’s ex-Philip Jucker Alta 61 IS, he closed in on 2013 victor Morris driving ‘Humphrey’ with a steely determined look on his face.  Gillies darted ahead and won the dash to the chequer by 0.051s.  The combo’s sixth Goodwood Trophy victory was also their seventh in the event’s history, and Mark’s eighth having also won the 2004 Richmond & Gordon Trophy race in a Cooper T53. 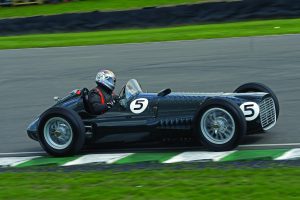 Baxter completed the podium, ahead of another trio of ERAs – Nick Topliss in R4B, in which Pat Fairfield triumphed in the ‘37 South African GP at East London, US-domiciled Irishman Paddins Dowling in his recently-acquired R5B ‘Remus’ (winner of the opening Revival race in 1998 in Ludovic Lindsay’s custodianship) and Ben Fidler in the equally fabled works development car R4D.  Top Maserati was the 8CM of Patrick Blakeney-Edwards in ninth place. 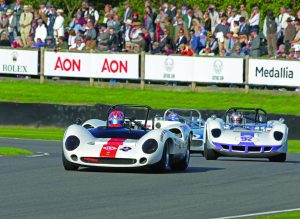 For a full report of all the racing, demos and other activities, see our November 2022 issue, which is also available in digital format…