Not in the history of the second-tier events at Goodwood – under the British Automobile Racing Club’s banner from August 1949 to July 1966, and GRRC-badged from the spring of 2014 – had a Members’ Meeting been staged as late in the year.  Nonetheless, the 78th edition on October 16-17 marked its return to the calendar, 2020’s date having fallen victim to COVID. 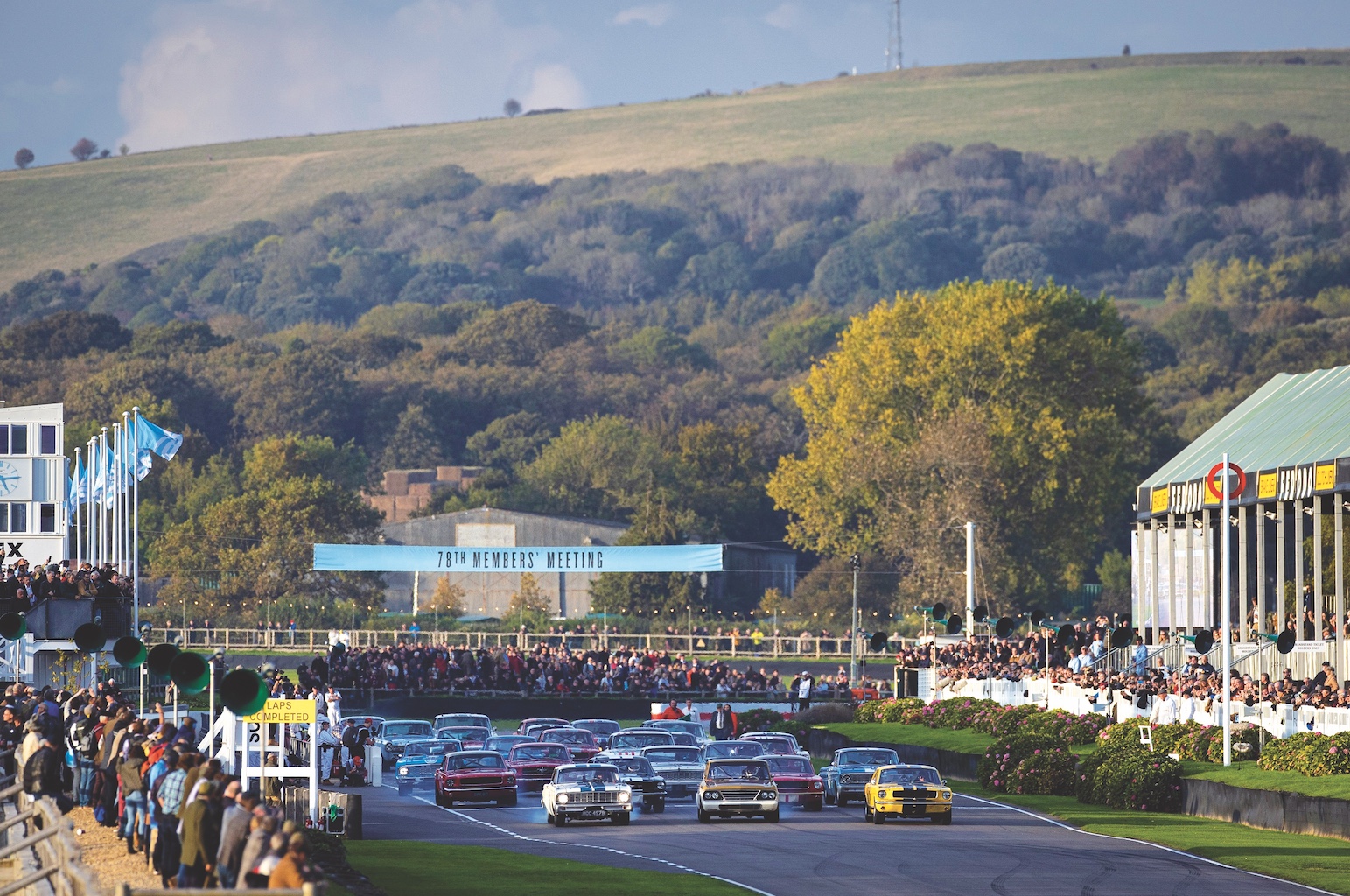 It’s now a mini-Revival, condensed into two days, with professionals populating feature grids, rather than the period opportunity for enthusiastic amateurs to strut their stuff behind closed doors. Nonetheless, tremendous racing across the board entertained spectators as Saturday morning’s torrential rain gave way to unseasonably warm autumnal weather.

Superstars did emerge from Goodwood’s contemporary MMs.  Future F1 world champions Mike Hawthorn, Jim Clark and Jackie Stewart, and Le Mans winners Roy Salvadori, Richard Attwood and Derek Bell were among those who won races on the challenging track back in the days.  And motorcycle ace John Surtees made a superb four-wheeled debut in 1960. 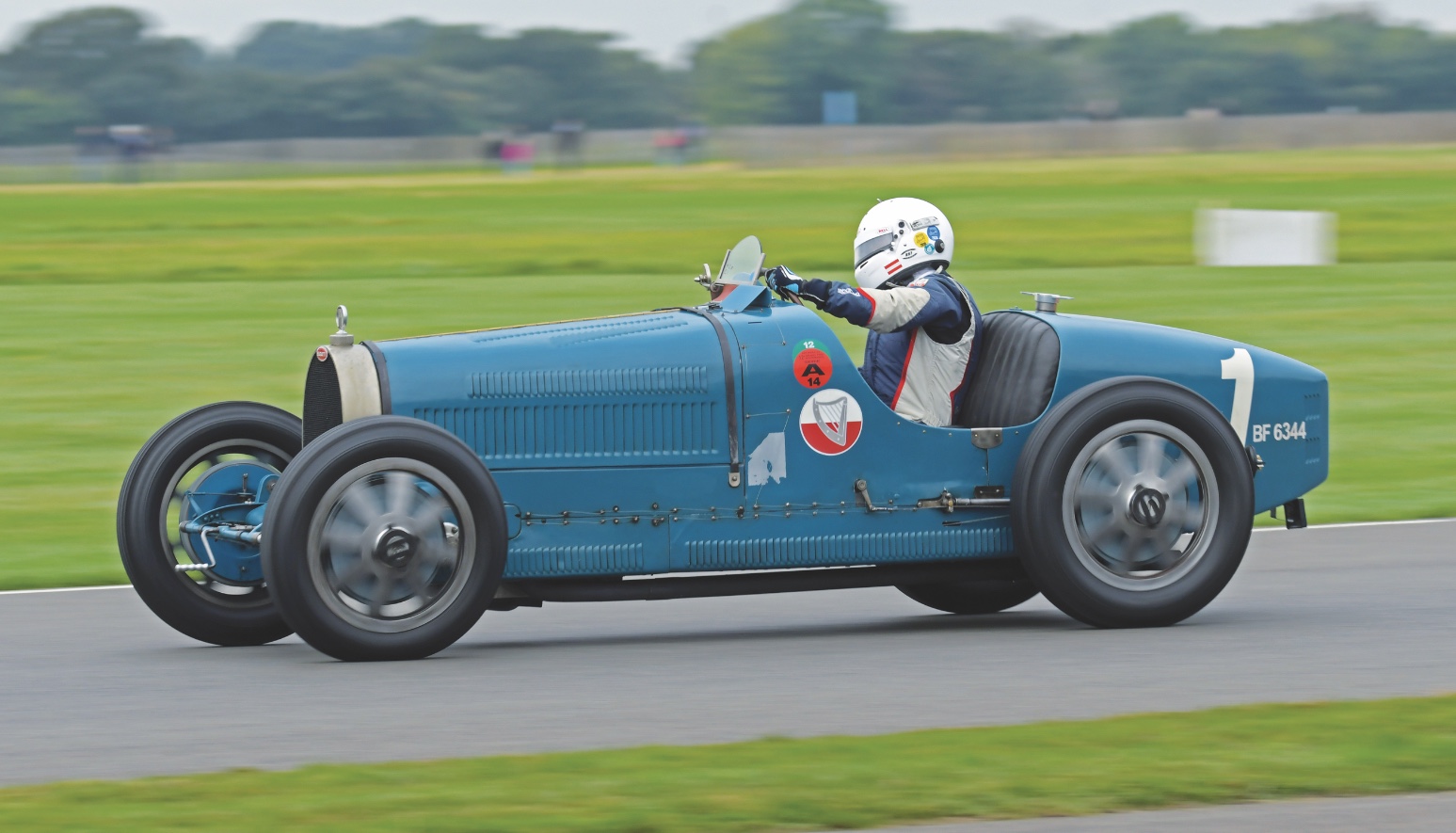 Peter Arundell won here twice in ‘62 – narrowly on Easter Monday – and dominant on August’s Tourist Trophy programme when he beat Attwood’s MRP Cooper by 33 seconds after 20 laps.  He is regarded as the king of Formula Junior, having won British championships in 1962 and ‘63 with Colin Chapman’s Team Lotus.  He didn’t win on his only Goodwood MM start in one – crashing out with Ian Raby at the start at the 49th in March 1962 – but he triumphed in a Lotus 11 sportscar at the 37th in ‘59, before single-seaters were admitted.  This year, Arundell’s Lotus 22 was back, indeed it played a starring role in the race bearing his name, following a post-practice driver change that sat uneasily with some competitors. 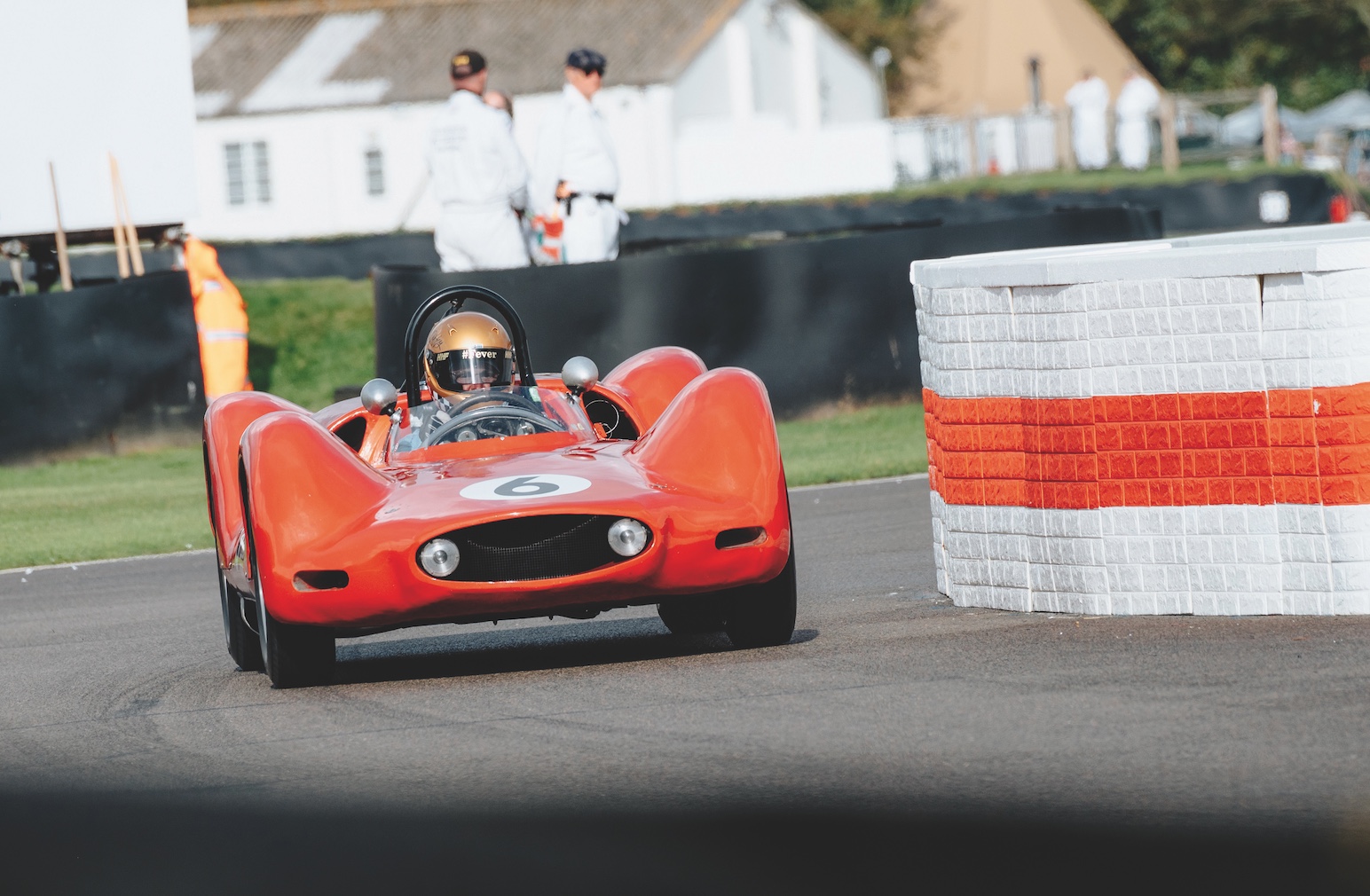 Former FJHRA UK champion Michael Hibberd qualified the car – repatriated from Italy and restored by the Rolls-Royce engineer’s team – well down the order.  But a back problem saw permission granted for son Andrew (a previous Goodwood FJ and 1000cc F3 winner) to race it. 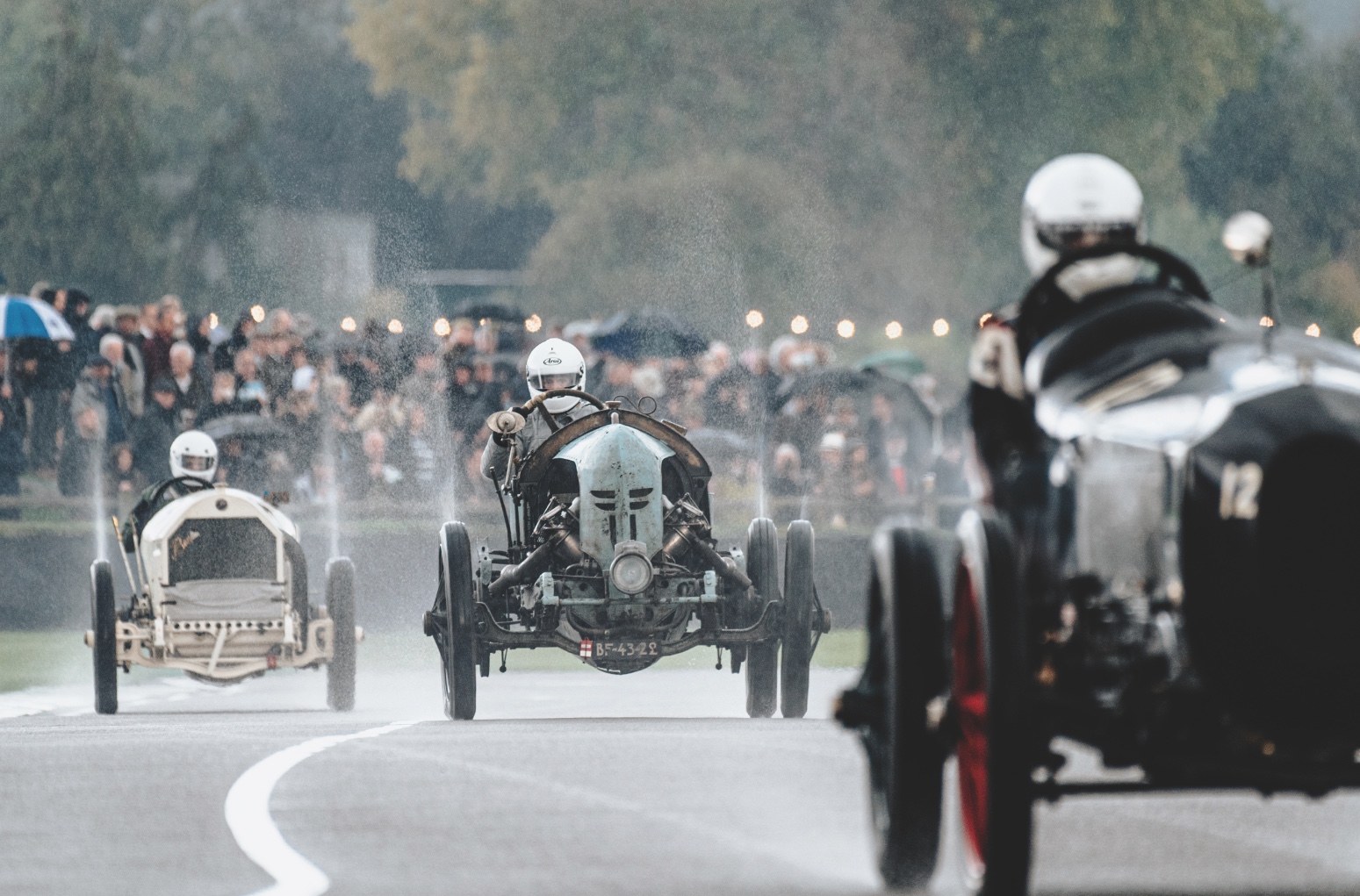 The earliest cars hailed from the Pre-1923 Edwardian era, a heady mix of thoroughbreds from hallowed marques Derrick, Mercedes-Benz and Sunbeam, and hairy concoctions, some with aero engines mounted in girder chassis, which appeared less rigid than their ballsy drivers.  These intrepid heroes practiced in, yet made light of, torrential rain, but mercifully were rewarded with perfect conditions in which to get their elbows out and fight for glory in two short sprint races honouring pioneer motorist SF Edge. 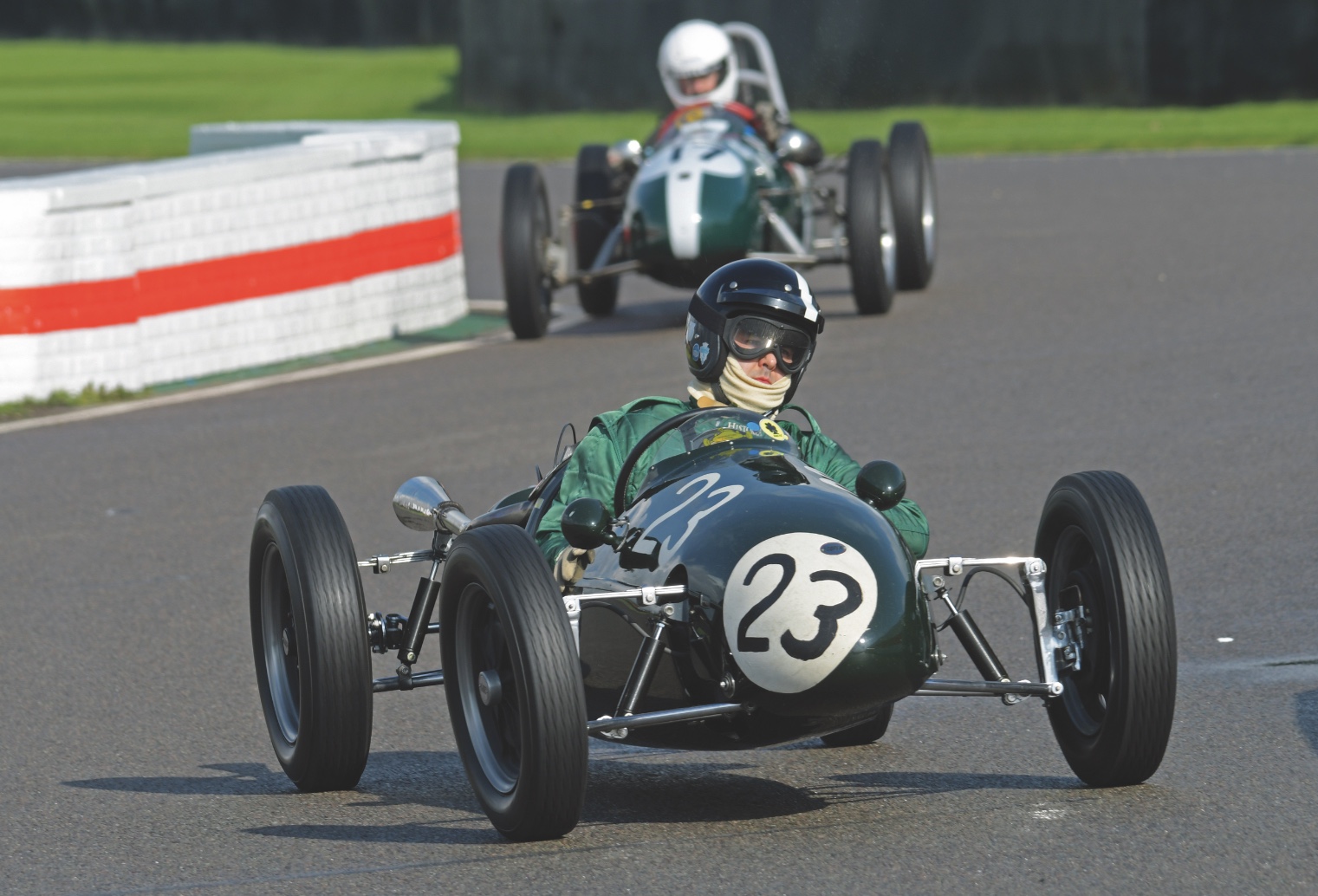 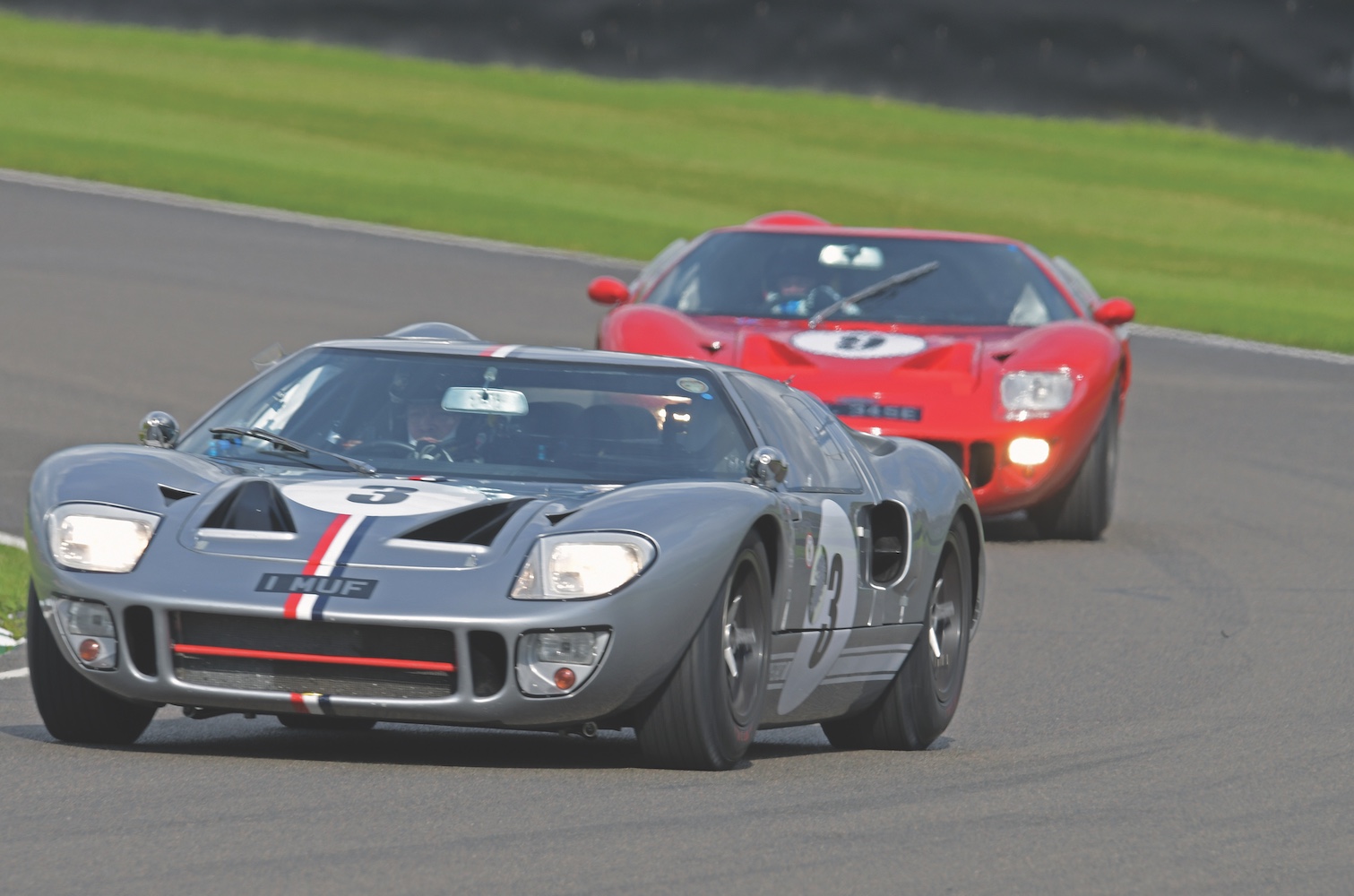 With Ford GT40s numerically dominant in the double-driver Gurney Cup sportscar field the winner could logically not come from elsewhere.  As a topsy-turvy grid sorted itself out Chris Goodwin (Lotus 23B) – from P13 – spun in the path of Westie Mitchell (Chevron B8) and smote the bank backwards at St Mary’s on the opening lap, whereupon former F3000 racer Mark Shaw (McLaren M1A) gyrated to avoid the Chevron, which continued.  Following a safety car interlude to cover the clear-up, Rob Hall surged ahead in Andrew Wareing’s Nickey Chevrolet M1A.

Having won the Revival’s Sussex Trophy race for 1950s’ sports racers in the Ecurie Ecosse Tojeiro-Jaguar, Cottingham’s hopes of an action replay in the Salvadori Cup contest were hindered when he was banished to the back of the grid for a technical infringement. 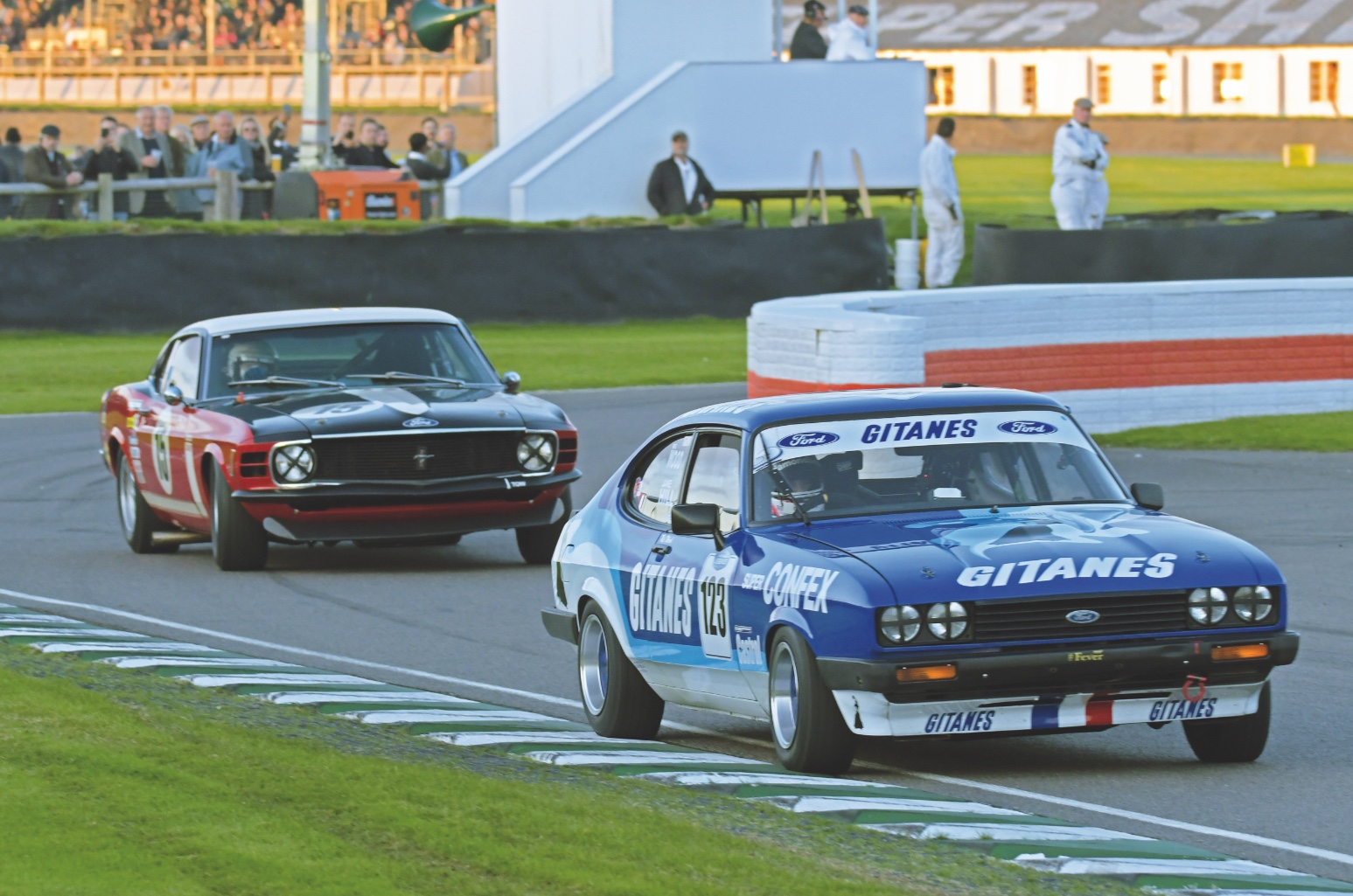 Pierpoint – who raced an 1100cc Fiat Special in the first Members’ Meeting and, 16 years on, won the ‘65 British saloon car championship in a Ford Mustang – was honoured by the V8 tin-top thrash.  Towards a third of it ran behind a safety car, Emanuele Pirro having come to rest upside down in Chris Clarkson’s Ford Falcon Sprint when it thumped the bank and was launched at ‘Moss Kink,’ the currently un-named entry to St Mary’s, while in fifth place on lap eight.

Three dramatic races decided the outcome of the Gerry Marshall Trophy ‘Group 1’ Saloon contest, in which the great showman’s son Gregor completed the final’s grid, only for his Vauxhall Firenza to expire.

For a full report of the racing and other track activities, see our December 2021 issue…