Three weeks after the season opener at Magny-Cours, Easter weekend saw the second round of the FFSA French Historic Championships take place on the undulating Lédenon circuit in high summer conditions, with temperatures approaching 30 degrees.   This represented a return to this southern circuit, as the final round of the 2021 championship took place there only last October.  Unique of its kind in France, the track is often referred to as ‘the toboggan’, in reference to the slopes that punctuate its 3100 metres laid out amongst the scrubland near Nîmes.  It is an old-fashioned circuit, whose design was essentially guided by the relief of the land, rather than by some pre-ordered idea.  Another particularity is it turns counter clockwise starting with the famous and formidable “triple left”, one of the most interesting corners of all the French circuits. 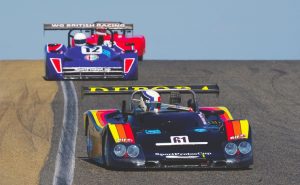 Eric Martin was king of the SportsProtos Cup hill in both races in his Debora SP91. Photos Hugues Laroche

Once again, the meeting ran to the same formula, with 300 or so drivers on 11 separate grids, each having practices on Friday and two races over the weekend, giving them as many opportunities to  collect valuable points towards the French championships.  Once again, Laurent Vallery-Masson and his HVM organising team staged a Saturday evening 90-minute, non-championship endurance race, known as the ‘200km of the Historic Tour’, open to any closed wheel car entered in one of the championship races, except for the Trophée Lotus.  Sadly, this initiative does not seem to have captured the imagination of the drivers, who perhaps want to preserve their cars for Sunday’s points-scoring rounds, as the entries were poor. 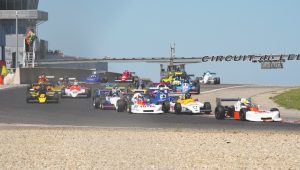 In one of the star grids of the Tour, Frédéric Lajoux, who did so well at Magny-Cours, was this time let down by his car, retiring from the first Formula 3 Classic race four laps from the end and leaving the field clear for son and father Davide and Valerio Leone (both in identical March 783s) to take the two top podium spots ahead of Alain Girardet’s Ralt RT3 in Saturday’s race.  But Lajoux was back for race 2 and sped through the field from the back, as if it wasn’t there.  Fourth at the end of the first lap, he was past both Leone Sr and Girardet by lap 11 but could not catch Leone Jr in time.  In the Formula Renault split, Lionel Robert restored the normal hierarchy, after losing out to Antoine Weil in race 1, but only with effort after a safety car period put Weil right behind him again. 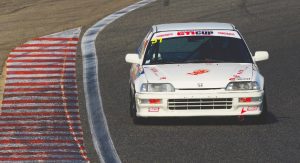