The eighth edition of the French Historic Circuit Championships (Historic Tour) opened the season at Nevers Magny-Cours on March 25-27, with an encouraging number of entries that included some 15% foreign drivers.  The 10 championship grids, bringing together 14 separate Challenges, Championships or Trophies, with guest grids from Colmore YTCC from the Netherlands and a Six Hour V de V race into the night on Saturday, meant some 380 separate entries for organisers HVM Racing.  Almost all the starring actors of the 2021 season were back, racing under balmy 20-degree temperatures.  Lionel Robert (Martini/Formula Renault Classic) and Sébastien Mathieu (Porsche 964/GT Classic), respectively outgoing Single-Seater  and Protos/GT/Touring champions, were there to defend their titles, while their principle rivals were there to try and take them away. 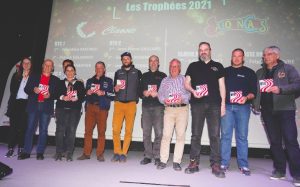 But the first order of business was to reward the 2021 winners, something usually done in February at Retromobile and this year delayed until Friday evening at the Visiocenter of the Nevers Magny-Cours circuit, after the postponement of the Paris exhibition. Photos Hugues Laroche

There was good news on Saturday for the two reigning champions, as Robert won the first Formula Renault Classic race of the season behind the wheel of his Martini MK48 and Mathieu scored a second place aboard his Porsche 964 RSR in the GT Classic race.   Robert went on to win the second race on Sunday too, putting him on maximum points towards the Championship. 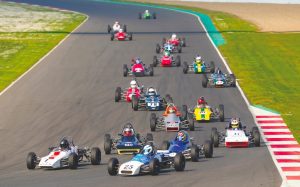 There were two wins for François Belle (No. 25) in the busy Formula Ford Historic Field

The F3 Classic race was particularly competitive.  Winner Lajoux, who crossed the line ahead of Davide Leone, commented, “I didn’t expect to finish ahead of Davide and Frédéric Rouvier.  Davide made me suffer, but after spending most of the race behind him I found the opening on the penultimate lap.”  Lajoux repeated the winning feat in Sunday’s second race, by an even smaller margin, with Rouvier again third.  Fourth in Saturday’s race, Manfredi Rossi di Montelera, who was driving three cars at the meeting, didn’t start the second race.  Lionel Robert and Lajoux now have equal points in the overall single-seat championship after the first of five rounds. 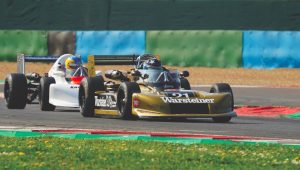 Frédéric Lajoux crossed the line a tenth of a second ahead of Davide Leone in Sunday’s F3 Classic race, Frédéric Rouvier came third both times