At the end of a long break of four months, the Historic Tour season resumed for its second half at the Val de Vienne circuit on 9-11 September for the fourth of six 2022 race meetings.  The 3.7km circuit welcomed nearly 300 drivers over three days for two sprint races in each of the various championships, and the 200km Endurance race on Saturday evening. 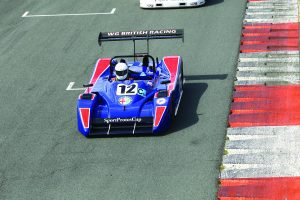 In an attempt to give spectators a more immersive experience, a monster grid walk was organised over the lunch break on Saturday, when some 200 of the cars at the meeting were lined up in a grid formation and fans were invited to come and see the cars up close in an F1-style “Maxi Grid Walk” that proved popular with the crowds.

In total, seven drivers managed to win both races on their grid.  They are Philippe Gandini, undefeated in Maxi 1300 in his Mini Jem, the only competitor still unbeaten on the Historic Tour this year, but also Davide Leone (March 783), who led Michel Xavier’s Chevron B38 home in Saturday’s F3 Classic/Formula Renault race and, in the absence of Xavier on Sunday, topped an all March podium ahead of Frédéric Lajoux and Brady Beltramelli on Sunday.  Lionel Robert won the Formula Renault split both times.

See our report in the October 2022 issue…