The circuit of Charade is the only one to have appeared on the calendar of the Historic Tour every year since it was first run in 2015 and therefore holds a very special place in the French Championships.  The 3.9km permanent mountain track created at the end of the 1980s retains the genes of the previous “big” Charade road circuit with its sinuous up and down character, frequented in its time by Formula 1.  Competitors always welcome a return to it and its rural, natural layout, the same age as many of the cars, even more so today, as the site is undergoing full modernisation and offers ever improving facilities.  Nearly 270 entries competed in ten series in 21 separate races on the last weekend of September.

Friday qualifying sessions took place under an overcast and threatening sky, but by late afternoon the sun was shining, bathing the reliefs in a warm light.  The night was quite different, and the showers took turns to prepare a wet and slippery track for the first races on Saturday morning.  The spectators, huddled under their hats and umbrellas, did not have to ask the drivers to spice things up little on track. 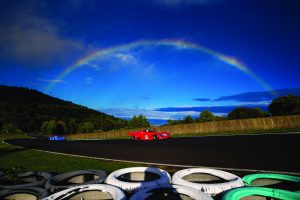 Friday qualifying sessions took place under an overcast and threatening sky, but by late afternoon the sun was shining, bathing the reliefs in a warm light.  The night was quite different, and the showers took turns to prepare a wet and slippery track for the first races on Saturday morning.  The spectators, huddled under their hats and umbrellas, did not have to ask the drivers to spice things up little on track.

The Mazdas of the Roadster Pro Cup opened the proceedings in frantic laps, where some showed the right trajectory to others, but where Laurent Fresnais always wins in the end.  Formula Kent Zetec followed, and the pilots in these single-seaters, devoid of aerodynamics aids, also had to show great dexterity.  The lead battle was between Arnaud Dousse, Hugo Carini, and Gislain Genecand, and this time it was Dousse who emerged victorious, with Carini taking his revenge to reverse the order on Sunday and Genecand third both times. 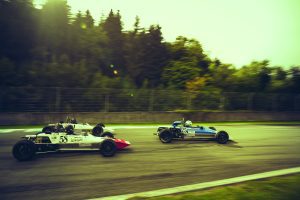 The track was nearly dry by the time a thin grid for the SportProtosCup lined up for the last race of the morning.  But wet or dry, Eric Martin (Debora SP91) was the man to beat  Winner also of the CN category, he shared the podium with Louis Kolly (BMW T192) first in category H, and Josserand De Murard in third and winner of the C3 category.  Matthieu Chateaux lingered near the back in his Lucchini, but recovered to come through the grid to finish second on Sunday.

In the afternoon, the atmosphere warmed up significantly for the F3 Classic race, with fourth place qualifier Davide Leone starting his March 783 from the pit-lane following a mechanical problem that prevented him from getting to the start on time.  As he flew through the field all the way up to second place to finish behind Frédéric Lajoux – and in front of his father Valerio –  he collided with the Ralt RT3 of Alain Girardet.  Both cars continued, but the stewards thought he’d been at fault and gave him a 30-second penalty for “conduite anti sportive,” dropping him down to 11th place.  He took a brilliant revenge on Sunday from the sixth row, winning ahead of both Lajoux and the Ralt of Girardet, as father, Valerio, retired his March.

The 21 competitors of the Maxi 1300 class were just as on fire with wins going to Julien Trousse in a 1294cc Mini Cooper and, in the absence of Trousse on Sunday, to the Simca Rallye of Alexandre Faliere.  Philippe Gandini took third both times in his Mini Jem, shadowed closely by Enzo Cassina in his Mini GT. 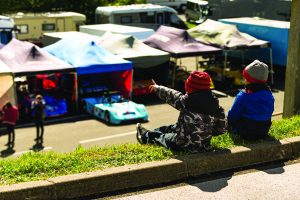 As the  Formula Ford Historic racers lined up on Saturday, a few drops of rain had begun to fall and the first braking point, at Manson’s, resulted in a hot moment for many.  Disaster was avoided and all drivers passed through without collision.  Gislain Genecand won this one ahead of Girardet and François Belle, the first three cars finishing in the same second.  The order went Belle, Genecand, Girardet on Sunday, but not as close, the top three way ahead of the rest of the pack on each occasion.

The rest of Saturday afternoon took place in an alternation of clouds swept by a violent wind, which give rise, following another drizzle, to magnificent rainbows to celebrate the victory of the unbeatable Dominique Vulliez in the Lotus Trophy race and, at the same time, to rush the start of the 200km enduro, in order to avoid the worst of the forecast rain.  Once again this 90-minute race attracted little interest, with only 11 starters.  Starting in the dry, before rain began to fall at mid-point, Vincent Delarche and Thierry Lortal won in their nimble Caterham Seven, and Historic Tour promoter, Laurent Vallery-Masson, with Carlos Tavares and Paul Chateaux came second in the TIGA Vallery-Masson used to win the Deux Tours d’Horloge last year.