After rounds at Magny-Cours and Lédenon, the French Historic Championship drivers met in great numbers (over 350) at Dijon Prenois on 6-8 May, with 21 races on the timetable in the circuit’s 50th anniversary year.

Halfway through the season, the championship points table shows Hugo Carini leading the Single-Seater/Protos category.  Although he was defeated in one of his two Formula Ford Kent races, he holds a 10-point lead (230 to 220) over François Belle (Formula Ford Historic) and Davide Leone (F3 Classic), both of whom were denied victory at Dijon.  Thanks to a double in F3 Classic, Fred Lajoux also returned to the running, 20 points behind. 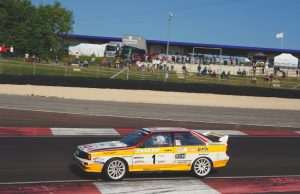 With a first and a second place at Dijon, Fabrice Lefebvre takes third place in the championship

In the GT/Touring category, Philippe Gandini, driving his Jem in the Maxi Mille series can boast of being the only driver of the Historic Tour that remains unbeaten so far this season.  Julien Grenet just failed to do likewise in his Dodge Viper in the Saloon Cars series, after he was unable to qualify and had to start at the back of the 35-car grid shared with the GT Classic racers.  Working his way through to sixth overall, he still managed to finish second of the Saloon Cars behind the Audi Quattro of Fabrice Lefebvre and losing only 10 points to Gandini.  With his race one win and second place in race two at Dijon, Lefebvre climbed to third place in the Championship.

French racers will now have a long summer break until 9 September for the next round, at Val de Vienne.