Bentley specialist William Medcalf has won the challenging Flying Scotsman rally after leading the three-day (1-3 April) event for pre-war cars from day one in his Bentley SuperSports.  Rain, snow and a hailstorm that blew across Scotland on day two assaulted the drivers, most in open cockpits, leaving just 79 cars from the 94 starters at the finish line at the famous Gleneagles Hotel.  “Thank you to Mr Pullan,” said a modest Medcalf of navigator Andy Pullen.  “It’s all in the navigation, I just do as I’m told,” but Andy pointed out, “This is William’s third win now, and I’m delighted that this is my first.” 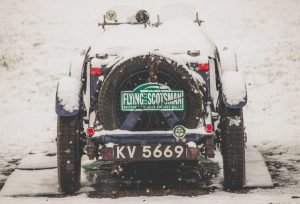 The Hunt family monopolised the next two steps of the podium with father Martin, fresh from his win in the Generations Rally, and Bob Mannix, coming home in second place in Martin’s Frazer Nash BMW, while son, Theo Hunt, and James Galliver (Martin’s navigator in the Generations) took third in a nimble Frazer Nash TT Replica, the pair having overtaken the experienced Paul Dyas and Iain Tullie in their big 4¼ litre Bentley on day two to finish by a margin of just ten seconds. 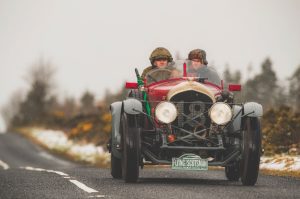 Of course, the competition element of the Flying Scotsman is but one part of something much greater.  For most it is just about finishing and completing a challenging route in vintage cars, in a celebration of the machines, and an opportunity to show them to a public that hold a fond fascination for them, evidenced by the sheer number that showed up along the route to wave the cars through and by those that gathered in the rain at the finish, clapping and cheering just as loudly regardless of the position in which the crew finished.