Tibor’s Sierra has the greatest appetite for Hungary

Round 4 of the FIA Historic Rally Championship took place in the picturesque, hot and sunny foothills of the Mecsek mountains in Hungary. Not far from the Croatian border, this remote wooded region was for a long-time part of the Ottoman Empire and after their expulsion, came under German influence back in the 18th century, before it became part of the Austro-Hungarian Empire. Based in the city of Pecs, it provided excitement, as no one there could imagine just how close the overall finish of the 2022 rally might be.

A two-day event on mixed tarmac, sometimes using closed stretches of quite wide public roads with artificial chicanes, it promised a furious pace for the front-runners with classes for cars up to 1990. Favourite was previous winner Italian ‘Zippo’ in his Audi Quattro, despite being in the in Category 3 for older cars (1976-81). 17 FIA category cars started but there was also a delightful selection of National Championship entries running alongside them, with such interesting marques as Lada, Skoda and FSO Polonez well represented. 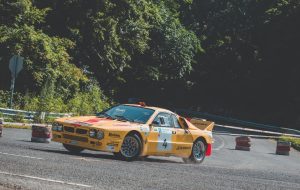 Day 1 saw Zippo setting fastest times again, but disastrously he hit a chicane, incurring a 20-second penalty. This allowed local crew of Tibor Erdi and Zoltan Csoko, in their Sierra 4×4, to move up to first place, chased by the Finnish team of Ville Salvisti and Risto Pietilainen in a rarely seen gold Lancia 037. Only two Toyotas were entered and sadly both dropped out, that of Vojtech Stajf with transmission failure, while Antonio Dezcallar’s ended up crashed in the woods, thankfully without damage to the crew. Meantime the Cat 2 and 3 classes for pre-’75 and pre-’69 cars were both led by BMW 2002s. 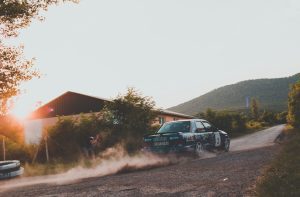 Day 2 was still hot and dry, but Erdi really rose to the challenge, taking fastest time on the first three stages. Zippo tried to fight back but despite winning SS7 it was not enough and Salvisti’s Lancia remained firmly in second. Then in the afternoon on Special Stage 9 the leading Sierra lost two of its four-wheel drives. This was the Finnish team’s chance, and they pressed the advantage right to the end, as the Ford lost increasing amounts of time. When the results were finally declared it showed the Hungarian team had done it. Incredibly they had won overall by less than a second. Austrians Karl Wagner and Gerda Zauner in their Porsche 911 got the better of Zippo and Denis Piceno in the Quattro to come third and win Cat 3. Disappointingly the gorgeous local ‘Scuderia Amici’ Alfa GTV6 retired on the final stage. The BMW 2002Tii of Italians Pietro Corredig and Sonia Borghese and the Ti version of Finns Sverre Norrgard and Ari Koponen continued their domination to win the older classes. However, it was the impressive 11th overall placing of the local Lada Vaz2101 of ‘Mésziati’ and Orsolya Oláh that raised a lot of cheers at the finish.