A month after Zippo’s triumph in Austria, competitors were back in their cars for round 6 of the Championship, this time in Finland on 11-13 August.  The Lahti Historic Rally is the only gravel event on the FIA calendar and evokes the spirit of the iconic 1000 Lakes Rally.  It promised 12 special stages, totalling 150kms.  Amongst a 49-car entry were 15 full season EHRC cars competing for championship points. 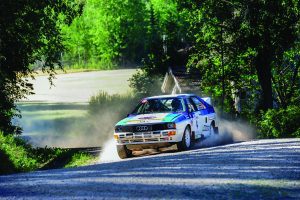 For their home event, Category 4 championship leaders Ville Silvasti and Risto Pietilainen swapped their Lancia 037 that had proved so troublesome in Austria, for the Audi Quattro A2 with which they won last year’s Lahti, but they were up against two new full season entries making their 2022 EHRC debut, also on home turf.  Kari Kivenne and Asko Sairanen were formidable in their Audi Quattro A2 and Tuomo Liukkonen and Vesa Suhonen were out in a Mercedes-Benz 190E, which sadly retired with engine problems on day 1.

With 11 national cars entered, the standout entry was the Latvala Motorsport Toyota Celica of 2014/15 Rally Finland winner and WRC front runner Jari-Matti Latvala and his co-driver Juho Hanninen, who were running in the National Championship and not eligible for EHRC points.  Latvala is also Team Principal of reigning FIA WRC Manufacturers Champions Toyota Gazoo Racing. 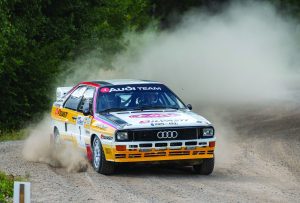 Category 3 championship leaders Zippo and Denis Piceno opted to miss the Finnish round and with a maximum 20 points on offer it was the perfect opportunity for Austrians Karl Wagner and Gerda Zauner, who were 17 points behind, to take the championship lead in Finland.

The first day saw Kari Kivenne and Asko Sairanen unbeatable by all but the WRC front runner, Jari-Matti Latvala, the Audi Quattro losing  1m3secs to the Toyota at the end of the final stage and finishing 54.7secs ahead of Silvasti and Pietilainen.  The Ford Sierra RS Cosworth 4×4 of Anders and Ingrid Johnsen finished the day in third spot on the EHRC listings. 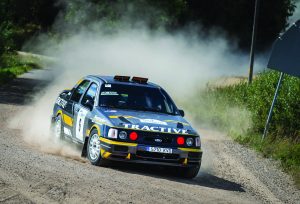 Karl Wagner and Gerda Zauner arrived at the final service in the Category 3 lead but with the Porsche 911 SC stuck in third gear.  The team retired, handing the overnight Category 3 lead to the Volvo 244 of Siegfried and Renate Mayr.

The second, and final day, saw Kivenne and Sairanen pull further ahead to finish the 12th and final stage 1m04secs ahead of the Silvasti/Pietilainen Audi to win Category 4.  Anders and Ingrid Johnsen finished the day in seventh overall and third in both the Category and the EHRC listings.

The Category 3 EHRC win went to Siegfried and Renate Mayr, the German couple consolidating their overnight lead following the retirement of the Porsche 911. 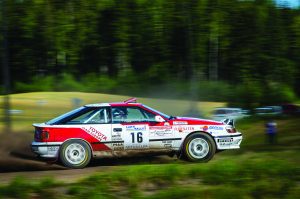 Not eligible for EHRC points, the standout entry was the Latvala Motorsport Toyota Celica of 2014/15 Rally Finland winner and WRC front runner Jari-Matti Latvala, who was fastest on all 12 stages

The Category 2 battle between the Ford Escorts of Valter Jensen/Erik Pedersen and Will Graham/Michael Johnston was close on every stage. Graham and Johnston gained the upper hand, but the chasing Norwegians kept the pressure up all the way.  At the end of the final stage there were just 7.4 seconds separating the two, with the British crew taking the points for the win.

For the full report, see the September 2022 issue…