The Rallye Weiz, a round of the Austrian National Championship that included a section for the FIA Historic Rally Championship for the third time, celebrated its 13th anniversary this year with a hearty opening party that on Thursday, 14 July. For the historic cars, this preceded two days and 13 stages, covering 147kms, in the foothills of the Styrian Alps. 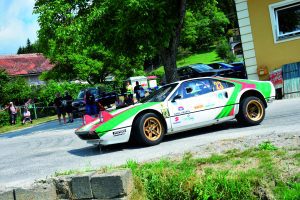 Amongst front-runners in the Championship, ‘Zippo’ was still leading the drivers’ championship by a healthy 21 points after four rounds in his Audi Quattro with his 2021 co-champion Denis Piceno at his side. Also in Category 3, Karl Wagner and Gerda Zauner were looking to close the points gap on their home event in their Porsche 911 SC, but they lost time on the first stage.

Three Category 4 cars battled for third place, with the BMW M3 of Marc Valliccioni and Yoann Raffaelli, the Ford Sierra RS Cosworth 4×4 of Tibor Erdi Jnr and Zoltan Csoko and the BMW M3 of Marty McCormack and Barney Mitchell swapping stage wins ahead of Category points leaders Ville Silvasti, who was suffering from engine problems in the Lancia Rally 037. 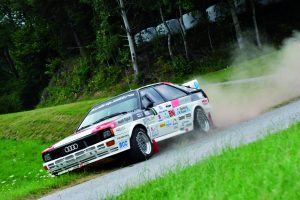 With a convincing overall and Category win, Zippo added to his substantial points lead in the Championship

There was drama on day 2, as Mats Myrsell had an accident on the first stage and then had to watch his Ford Sierra Cosworth catch fire and unfortunately burn out completely.

This did not distract Zippo, who continued his faultless run to win seven of the eight remaining stages to take overall and Category 3 victory 69.3 seconds ahead of Wagner and Zauner, the leading pair having been in a league of their own, eliciting great cheers from the crowds.

While these two were fighting for the overall win, third place in Category 3 was secured by the Volvo 244 of Siegfried and Renate Mayr, the Germans finishing well ahead of the Ferrari 308 GTB of Andrew McAlpine and Andy Bull, which had clipped a chicane and damaged the Ferrari’s front right wing. The Category 4 battle continued unabated, with the Ford Sierra RS Cosworth 4×4 of Erdi and Csoko making the early running, until McCormack powered his BMW to the front on SS7 and took the fastest category time on six stages and the fastest overall time on SS13. Erdi retired at the end of SS11 promoting Valliccioni and Raffaelli into second place, with Championship leader Ville Silvasti bringing his Lancia 037 Rally into third place, despite the persistent engine issue that dogged the car for most of the weekend. In Category 2 the Porsche 911 Carrera RS of Paolo Pasutti and Giovanni Campeis built on the overnight lead of two minutes to finish 13th overall, while Ernie and Karen Graham claimed their fourth Category 1 victory of the 2022 season, fastest on all the day’s stages, making them the fastest Category 1 car on all thirteen stages of the rally.

For a fuller report see our September issue…