It was sixth time lucky for Marcos 1800GT stalwarts Allen Tice and Chris Conoley, who finally landed gold in the Classic Sports Car Club’s Thruxton Mintex Classic K race on April 24.  With a fourth place, two thirds and two seconds already on their log at the annual event, this victory was long overdue for the popular pair, who over the years had not qualified lower than fourth for the Pre-1966 FIA Appendix K contest.  Twice pole sitters, the combo gridded third this time, behind the Lotus Elans of previous winners Anthony Hancock (now sharing with protégé Murray Shepherd) and Paul Tooms, who both retired, Tooms with a fine spray of oil frying on his exhaust on the opening lap.  Despite concerns over oil surge in the sweeping bends of the UK’s fastest circuit, the rugged Volvo B18 engine built by Conoley hung together for them to beat Alex Thistlethwayte (Ford Mustang) and Ollie Streek (Mini Cooper S) in a 28-car field.  The winning team has been dubbed “Fabulous 208” – Radio Luxembourg’s old motto, as it’s the sum of Tice and Conoley’s ages, plus the long-serving Marcos’ 60 years. 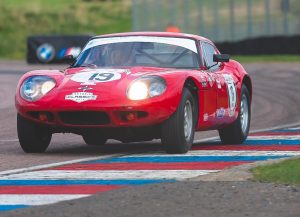