The Estoril Classics meeting has grown and grown in popularity amongst the drivers, with healthy grid sizes, and with the local population, the circuit announcing 35,000 spectators filling the grandstands and tickets to the paddock areas sold out.  Supported by Peter Auto, on a five-year contract, it was also the theatre for the final round of the 2022 season for the Series by Peter Auto on the weekend of 7-9 October.  In its beautiful setting in the municipality of Cascais more than 250 loyal Peter Auto followers made the trip south to do battle on the track one last time before the engines fall silent until next year.  From Thursday onwards, the paddock was abuzz, first with private practice to enable drivers to get to know the 4,182km track and its 13 corners and then for Friday’s qualifying sessions.  Thirteen races were spread over a weekend bathed in summer sunshine to everyone’s great delight. 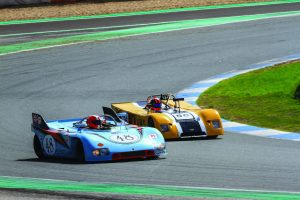 Sponsored by the municipality of Estoril, the highlight of the meeting is the Formula One event, evoking the era when the Estoril Autodrome hosted the top category of motor sport.  Meeting promoter Diogo Ferrão assembled a grid of 16 cars of the 1970-1985 era, and after Friday’s qualifying a great duel was promised between Nick Padmore in a Lotus 87B and the Williams FWO78 of Martin O’Connell.  Sadly, on Saturday O’Connell didn’t start due to gearbox problems, leaving Padmore to gallop home 38 seconds ahead of the Ensign MN181-B of Laurent Fort, after  the latter’s close race with Steve Brooks (Lotus 91), who completed the podium.  Ewen Sergison came fourth in his class A Surtees T59 after an intense duel with Jamie Constable’s Embassy Lola T370, which culminated in contact between the two and the Lola’s retirement.  It was a bad day for Williams, as Mark Hazell, who had qualified his FW08C in fourth place, was also a non-starter. 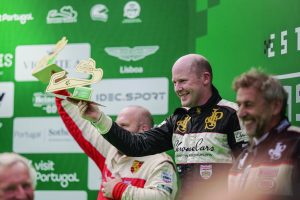 Padmore won the second race too, with a fired-up O’Connell coming up from behind.  Starting in last place beside Hazell, both Williams drivers climbed through the field.  O’Connell got as far as second place and Hazell made it to eighth.  Brooks came third again, holding off Fort despite a gearbox problem.  Marc Devis beat Sergison to class A honours in his non-ground effect Lotus 78.

Maxime Guenat took Classic Endurance Racing 2 honours in his Lola T286 after poor strategy saw him make a great comeback from ninth place in the second half of the race. 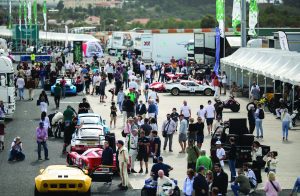 The interest in the Fifties’ Legends races was provided by Eugène Deleplanque, who started at the rear of the grid and fought his way up to second place in his TVR Grantura.  Up front, Serge Kriknoff (Lotus XI 1500) remained out of reach to finish 9.4sec ahead.  There was also a superb Mini Cooper S battle, with David Barrere clinching third place ahead of Fabrice Quesnel and Simon Nobile, the trio a minute down on the two leaders.

Poleman Christian Gläsel kept Mike Newton at bay throughout the first of two Endurance Racing Legends races for the latest cars at the meeting , both men driving MG-Lola EX257s, but was unable to repeat in Sunday’s race, the German suffering engine problems, leaving Newton to cruise home ahead of Marc Jully and the 993 Porsches of Patrick Simon and Sébastien Glaser.

There seems to be no lack of enthusiasm for the pre-‘66, two-hour format, with 45 cars starting the Sixties’ Endurance race on Saturday evening, with most having travelled long distances to be there at the end of a long season.  Cobras, of course, are the name of the game here, with six qualifying in the top seven, and it was finally the young driver line-up of Guillaume Mahé and Maxime Guenat in their 289 Cobra that came out on top, with 10 seconds in hand over Harvey Stanley’s car. 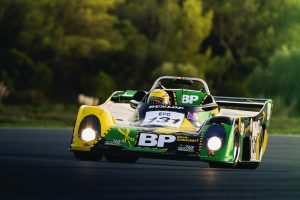 Andrew Smith and Oliver Bryant won the 90-minute 2.0L Cup race, marked by the  retirement of pole-sitters Mark Sumpter and Andrew Jordan on lap ten.  Emerging from the pitstop in eighth place, Bryant drove superbly to cut through the field, passing leaders  Bonamy Grimes and Mathew Holme in the closing laps.

After Christian Bouriez (Bizzarrini 5300 GT) was side-lined with mechanical problems in race one of the Greatest’s Trophy, the Frenchman set to work in race two from the back to take the lead away from race one winner Yves Vögele by midrace.  After that he continued to increase the gap to the Swiss Porsche 904/6.

Maxime Guenat scored his third victory of the meeting when he crossed the line in the one-hour Heritage Touring Cup race.  As Ford Capri RS 3100s dominated qualifying, with only Christian Traber upholding BMW CSL honour in the top placings, only one of the powerful Cologne cars failed to place in the race when Yves Scemama retired with mechanical issues. 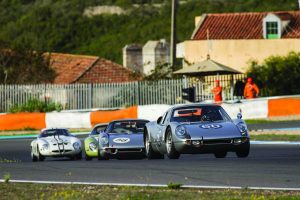 The Classic Endurance Racing I cars had to wait until Sunday afternoon for their one-hour race, which turned out to be one of most interesting races of the weekend, marked by the domination of Mark de Siebenthal in his Porsche 908/03 for the first half of the race.  Once the pit stop window had closed de Siebenthal found himself in the middle of the 32-car field at the same time that Armand Mille, who had started his Lola T70 Mk III B in sixth, snatched first place from the squabbling Chevron B19s of Emmanuel Brigand and Rolf Sigrist.  Mille was never troubled thereafter, but the Chevron drivers kept up their battle to the end to finish a second apart with Brigand leading.

The Sixties’ Endurance grid was dominated by Cobras

Iberian Historic Endurance had the honour of closing the hostilities of the sixth edition of Estoril Classics.  Last year’s winner Lars Rolner, relayed this time by Patrick Simon, prevailed in their Martini Racing Porsche 911 3.0 RS in a start to finish performance.

For a full report, see our November 2022 issue, also available in digital format.