Drivers flying out to Barcelona in the hope of a season-opener under the Spanish sun were slightly disappointed as the Iberian peninsula proved unable to escape the cold spell that froze the entire continent on the first weekend of April.  The end result was a bit of a mixed bag, with Saturday still sunny despite a chilling wind, while Sunday was desperately cold and rainy.  This also affected the racing, leading to a pair of truncated Masters races and a third one that never got going at all. 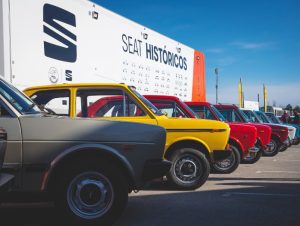 Seat was a sponsor and animated the paddock with activities and displays. Photo Mattijs Diepraam

This meant a blow for the visiting Masters series, whose entry numbers had already dwindled, many of its drivers still handicapped by Brexit but now also by the increasing costs of travel and transport.  In the end, Masters brought two of its five grids, and it was unsurprising that these were the two with the most continental driver base.  The former Masters Historic Formula One series for 1966-’85 F1 cars was renamed Masters Racing Legends after Formula 1 refused to extend their trademark license for the ‘F1’ and ‘Grand Prix’ terms when the Masters decided not to run as an FIA Championship this year.  It brought 15 cars, while 17 cars were entered for the Masters Endurance Legends races for 1995-2016 Le Mans prototypes and GTs.  Diogo Ferrão’s Race Ready organisation were also on the programme with their Iberian Historic Endurance grid as well as their new Carrera Los 80s series for post-1981 GTs and touring cars. The bill was completed by three Copa Racer rounds for local Mini Cooper drivers, in a Targa Iberia-hosted event that, as usual, had lots of entertainment on site, including music, dancing, shopping and children’s activities, with Seat’s classic car department pulling out all the stops. 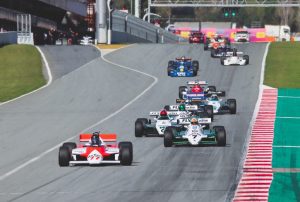 Steve Hartley (No 77) won in the dry on Saturday on his first trip to Barcelona. Photo Courtesy Targa Iberia

In Masters Racing Legends, the main rivals of the past two years were both present at Barcelona, reigning champion Mike Cantillon lining up his Williams FW07C – now run by Front Row Racing, the follow-up from CGA Race Engineering – next to polesitter Steve Hartley who finally ventured abroad after having concentrated on the British rounds in the past few years.  Hartley was with a new team, his McLaren MP4/1 now fettled by Anthony Seddon Racing, leaving Mirage Engineering to run James Hagan’s cars.  Meanwhile, the dominant 2021 pre-78 champion Lukas Halusa had moved up a class by switching to a 1982 Williams FW08, while his teammate at Hall & Hall, octogenarian Michel Baudoin, had swapped his trusty Hesketh 308E for a Rothmans-liveried March 821.  At the end of last season Halusa’s title-winning McLaren M23 was due to go to his brother Niklas, but fresh business commitments will prevent the older Halusa brother from doing more than four rounds. 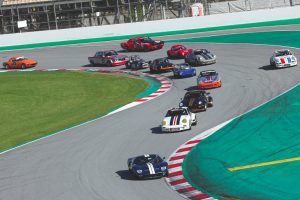 On Saturday, Hartley surprised everyone including himself by leading from pole to the chequered flag, albeit hunted down by Cantillon, who could not find a way to get closer than seven-tenths from the ‘Jam Baron’.  It was a stunning performance for a man who had never raced at Barcelona before.

The day after, Christophe d’Ansembourg soon hit the front by passing the polesitting Steve Brooks on the reversed grid for the first five in Saturday’s race.  The Belgian kept his Williams FW07C ahead of teammate Cantillon, who just like Halusa and Hartley soon followed through, and looked set for a finely poised final few laps when rain suddenly intensified from a few drops to a steady drizzle, especially at the back of the circuit.  Leading the way and forced to show the others where to find the grip, D’Ansembourg was the first to spin.  Cantillon managed to avoid his teammate but five corners later an opportunistic move from Halusa earned the young Austrian the lead – just moments before the safety car was deployed because of Brooks crashing his Lotus 91 in the rain.  The neutralisation lasted until the chequered flag, leaving Halusa the victory in his first weekend on his fresh mount. 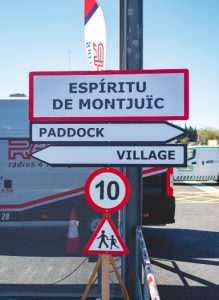 On Sunday, at the end of the second Copa Racer race, one of the Minis blew its engine to leave a trail of oil that ran from turn 5 to turn 10 – so effectively the entire second section of the circuit.  For two hours marshals valiantly attempted to make the track usable, but the second Masters Endurance Legends Masters was finally cancelled.

This oily disaster also seemed to spell the end for the second Iberian Historic Endurance race and the third Copa Racer race, but a new chemical treatment allowed those races still to run.  In the first Iberian Historic Endurance race, held in the morning, Jordi Puig’s Ford GT40 had comfortably led the Porsche 911 RS machines of Pedro Bastos Rezende and Eduardo Davila but when Puig made the strategic error of not pitting under the safety car while the pit window was open, Rezende and Davila took advantage ahead of Carlos Barbot’s Lotus Elan 26R, who was among the ones to profit most from the safety car period.  Visiting Frenchman Florent Cazalot was third on the road but a penalty for pitting his Lotus Seven too early dropped him to sixth in front of Ron Maydon and Robin Ward sharing Maydon’s Ginetta G4R.  Cazalot looked to set the record straight by leading the delayed second race from Rezende and Puig but was again hit by a 25-second penalty, resulting in a double for Rezende. 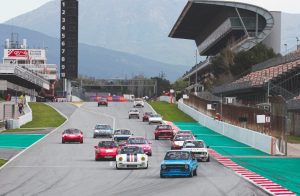 For Mattijs’ full report, see out May 2022 issue