Called-up on the eve of the event, reigning Ford Fiesta XR2 series rookie of the year Causer made a seven-hour round trip to collect his race suit, then experienced both the featherweight 1500cc Coventry-Climax-powered streamliner and the Indy circuit for the first time on race morning.

Starting the 40-minute Libre race from pole, Causer established an early cushion which was expunged by six laps behind the safety car.  At the green he charged clear again, taking the chequered flag ahead of the Jaguar E-types of Nick Maton/Jack Tetley and Rick Willmott. 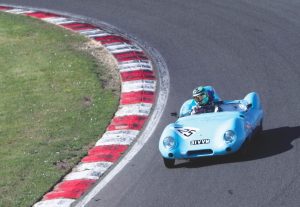 “A bit of an unexpected turn of events today,” said 35-yer-old Causer, who only started racing last season after nearly 20 years in technical roles.  As a result of his success Alex was overjoyed to be invited to share Watson’s Lotus at Mugello a fortnight later.

The other standout performance at Brands came from MG Motorsport’s MGB ace Tom Smith who – after retiring a customer’s identical car from the Libre race – inflicted a rare Equipe Classic Racing ‘A’ defeat on the considerably lighter but similarly powered TVR Grantura Mk3s of Lee Atkins and Rob Cull.

Smith engineered an opportunity to usurp leader Atkins and committed brilliantly round the outside of the adverse cambered left-handed Surtees bend, a feat that made onlookers breathe in sharply.  Earlier, Simon Ashworth triumphed in the ‘B’ race, breaking a three-year sabbatical in the family TVR Grantura, shared later with septuagenarian father Mark.

James Wheeler won both legs of the MG B/C/V8 double-header in his 400bhp Rover-powered GT.  Rivals Neil Fowler and Ian Prior pushed him hard in the respective races before their engines expired.  Jonnie Wheeler (James’ dad) and Ben Tovey claimed a tight class C victory apiece.