After a COVID break of two years, the participants, the organisers, the many volunteers and the numerous fans were glad to be back in Daun on 21-23 July for the 10th edition of the  Eifel Rallye Festival.  Only the weather turned a new page, as if it wanted to compensate everyone for the missing years and the weekend passed without rain.

The rolling rally museum once again became an international class reunion with the spectator car parks at the stages and in Daun full to capacity.  The Rally Mile was jam-packed over the entire weekend and, at the autograph session, shortly before its official end, the fans were still queuing in a line that was well over one hundred yards long. 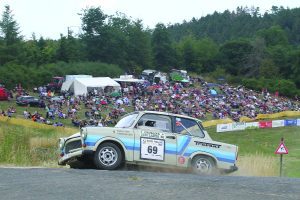 Reinhard Klein from Cologne, the man responsible for putting together the starting field, drew a positive conclusion.  “With this Festival, we want to give the history of rallying a home – and over the last ten events we have succeeded more and more in doing so.  Over the years, and this is also confirmed by our participants, the quality of the vehicles has also become better and better.”

A maximum possible starting field of 155 cars, comprised of originals and faithful replicas, representi a perfect cross-section of more than 50 years of the sport.  Thierry Neuville, Simo Lampinen, Kalle Grundel, Stig Blomqvist, Fabrizia Pons and Harri Toivonen were just a few of the rally royalty that was on hand to do demonstrations, interviews and sign autographs for the enthusiastic crowds.

Though there is no timekeeping, there are awards, and at the finale of the big rally party on Saturday evening, six unique prizes were presented.  The ‘Sideways Star’ as ‘cross-driving’ advance car was awarded to the Dutchmen Gerard and Mike Stacy in a Ford RS2000 MK2.  The ‘Best replication’ went to Frank Unger/Thorsten Scheffner for their Lancia Delta Integrale 16V.  Ezio Lolli and Alessandro Grillo won the ‘Best Original’ prize for their Lancia Stratos, while the prize for the ‘Most Beautiful Car’ was awarded to Franz Zehetner/Martin Strobl, driving a prototype Alpine Renault A310 V6 from 1977.  Helmut Steiner and Hanna Wadlegger were particularly pleased when the rally stars present chose their Toyota Corolla WRC for the ‘Champion’s Choice’ award, which was presented by Stig Blomqvist.

Simo Lampinen was this time co-pilot with Fred Walter in exactly the same Lancia Beta Coupé with which he had competed at the Acropolis Rally in 1975. This was Walter’s tenth participation at the Festival and Fabrizia Pons presented him with a special award.