Home of the Formula One United States Grand Prix for 20 years (1961–1980), “The Glen,” as the Watkins Glen International Circuit is known, was built in record time back in 1956 to host motor races previously held on public roads in and around the village.  Jenny Ambrose from the International Motor Racing Research Center writes about the first race meeting…

The first purpose-built, closed-course, road circuit at Watkins Glen, opened on a glorious, chilly autumn weekend in mid-September 1956, welcoming 118 racers to compete in six race events during the 9th Annual International Sports Car Grand Prix.  The circuit, which has since hosted nearly every major racing series over more than six decades, almost did not open at all. 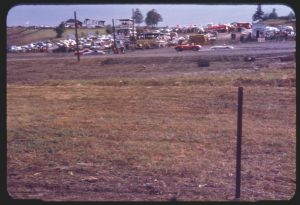 The efforts by the Watkins Glen Grand Prix Corporation – up to the 11th hour – to ready the 2.3-mile track in time for the race weekend were extraordinary.  A successful “wave the green flag” bond campaign in the local community raised initial start-up funds for the project in a single month.  Contractors broke ground in late July and, after delays caused by heavy rains and unfavourable weather, completed the final touches on the asphalt paving only an hour before practice sessions began.  Alterations to one of the curves, using earth-moving equipment under the glare of spotlights, were made during the night before the first race.  And then officials from the Sports Car Club of America jeopardized the entire event by withdrawing their recommendation for members to participate at the last minute due to what they deemed the “serious and hazardous conditions of the course.”

Despite official concerns, not a single driver willingly withdrew from competition.  A crowd exceeding 30,000 spectators enjoyed the “European carnival aspects” of the weekend and watched a “thrilling race” across the fast and tricky course as George Constantine of Sturbridge, Massachusetts in his D-Type Jaguar took the chequered flag for the Sports Car Grand Prix.

With a mission to “To collect, preserve and share the global history of motorsports,” The International Motor Racing Research Center, located at Watkin’s Glen, New York, has, since 1996, been a place open to historians and to the general public.  It preserves an ever-growing  collection that documents the history of racing in the more than 4000 books, 250 different motorsports magazines and newspaper titles, club and sanctioning body records, race results, programs and posters, papers of motorsports journalists and scholars, correspondence of race organisers and still and moving images.  Its knowledgeable research and archives staff assists hundreds of scholars, journalists, authors, documentary film makers, drivers and race car owners from all over the globe with inquiries about motorsports history every year.  It relies on gifts and donations from the motor sport community.  See www.racingarchives.org.