From the pages of Victory Lane Magazine with kind permission, Pete Gorski writes….

His name is as celebrated and recognised as any from the post-war era, whether it’s as a driver, a car builder or an aero appendage on the back of a wing.  He never really ran for President, but that doesn’t mean you won’t see bumper stickers all over vintage paddocks in America encouraging people to vote for him.  And if there’s one piece of trivia fans should know, it’s the identity of the only American driver to win a Formula One race in a car of his own design.  Dan Gurney, the winner of the 1967 Belgian Grand Prix, creator of All American Racers’ Eagles (and Barracudas), and the Gurney Flap, (because ‘wicker bill’ sounds like a character in an English folk tale).  He is so well known that my spell-checker just spelled his name when I accidentally left the ‘n’ out. 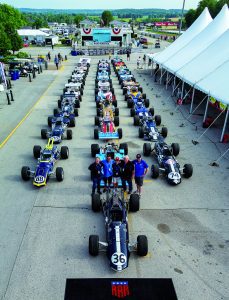 As the featured marque at this year’s Weather Tech International Challenge with Brian Redman, held on the weekend of 15-17 July, that 1967 Spa winner and quite a few more Eagles roosted at the 2022 event.  Indy cars, a Formula Ford, and the all-conquering AAR Eagle MkIII GTP Toyota — you could spend an entire day under the tent just soaking in the history.  And when the weather cooperated, some of those Eagles took flight, running demonstration laps around the 4.048-mile circuit.

Instrumental in facilitating the event was Kathy Weida, who joined Gurney’s shop at the age of 17 and served as his personal assistant for years and is now Vice President of AAR.  She gives much of the credit to the car owners, who joined in planning and organising in addition to the generous donation of their time, their cars, and transportation from as far away as Canada and Mexico.  In addition to car owners, many AAR alumni were present for the gathering.  Gurney’s sons Alex, Danny and Justin were present, as were early AAR collaborators Terry Malone, designers John Ward and Trevor Harris, and many others.  To speculation about a future event, Justin Gurney said, “Double the number of cars.”

A mid-summer favourite, the WeatherTech International Challenge with Brian Redman, organised by Road America is one of the largest vintage racing events in the United States, featuring over 400 competing cars in a wide variety of ages and classes, a concours, and many other off-track activities.