Last year on the weekend of the 50th anniversary of the founding of the UAE, Dubai’s Historic GP Revival took place with a grid of Group C cars and a grid of F1’s from the 70s and early 80s (see our report in the February 2022 issue).  This year organisers, which include the Dubai Autodrome and a few Dubai based motorsports companies such as GP Extreme, Flat 12 and Tomini Classics, are expanding the timetable to include two separate F1 categories and two for endurance machines.  For F1 cars the grids will stretch from 1970 to 1985 (race) and from 1988 to 1994 (demo), and for sports cars from 1982 to 1993 to include Group C, IMSA and GTP cars (race), and GT and Sports Prototypes from 1994 to 2010, including FIA World Endurance Championship and IMSA cars.  Organisers are expecting over 100 entries this year. 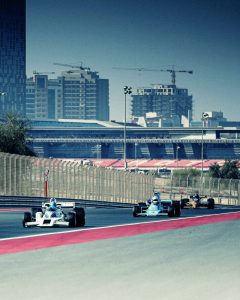 Confirmed entries include F1 champion John Surtees’ eponymous 1972 TS9B, the Le Mans-winning 1987 Rothmans Porsche 962, James Hunt’s first winning grand prix car, the Hesketh 308B, that won the F1 race last year with Oliver Webb at the wheel, and the incredible 1995 Porsche 997 GT1.  Many machines will be brought in from manufacturer museums and private collections.

The event will run five days after the nearby Formula 1 Abu Dhabi Grand Prix and at the same time as Qatar’s hosting of the football World Cup, with a 1970s-themed paddock and dress code, Paddock Club for the drivers, music, classic concours Gala dinners, celebrity drivers and other hospitality, on 25-27 November.  See https://gulf-historic.com for details and entry forms.