Exceptional Duncan Hamilton ROFGO Group C1 and U2TC races highlighted Motor Racing Legends’ 11th Donington Historic Festival on April 30-May 1.  As spectators and car clubs were welcomed back to MotorSport Vision’s east midlands outpost – the event resumed behind closed doors last year – hardcore enthusiasts who arrived in encouraging numbers may have initially questioned whether the eight-race programme of MRL staple grids, temporarily scaled back to two days, merited the title.  However, the shock of a sparse paddock was quickly allayed by the central marquee harbouring a bevy of the world’s most spectacular sports prototypes showcasing Jaguar, Porsche, Sauber-Mercedes and Lola marques.  Forty years after the Group C era debuted and three decades since the mighty machines’ last contemporary race here under the patronage of the circuit’s late saviour Tom Wheatcroft, they, and a Battle of Britain Memorial Flight Spitfire wheeling overhead, were stars of the show in ‘Wheatie’s centenary year.  Marcus Pye reports…. 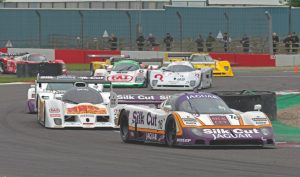 The closing stages of Saturday’s opening leg were sensational for 2012 World Touring Car champion Rob Huff who had pulled a decent lead in Richard Meins’ rumbustious ex-Paul Newman/Mike Brockman Spice SE89P IMSA GTP contender, its Chevrolet V8 blunted by a misfire which forced him to use reduced revs, as he was hunted down by Andrew Bentley and Phil Keen in a pair of wailing Silk Cut Jaguars.  Just as Keen, in Jon Minshaw’s XJR-9, sensed a whiff of potential victory, its final drive stripped, forcing instant retirement on the penultimate lap and leaving Bentley to shadow Huff to the chequered flag.  “Those last laps were pretty intense,” said Rob, who like Keen would have to sit-out Sunday’s race.

That was won by Bentley (XJR-8), after a stout challenge from David Hart came up a second short.  The Dutchman set the weekend’s fastest race lap of 1m02.347s (114.27mph) after a brief mid-race shower, in one of the rakish 3.5-litre Judd V10 engined Lola T92/10s.  The precipitation caught out Lukas Halusa whose Porsche 962C skated into the tyre barrier at Coppice, triggering a caution period, and Tony Sinclair, whose subsequent excursion in Grant Reid’s Crowne Racing Obermaier Spice there, presaged an early stoppage.  A lap behind Bentley and Hart, dad and lad Mike and Matt Wrigley picked up third in their Spice-Chevrolet SE89P. 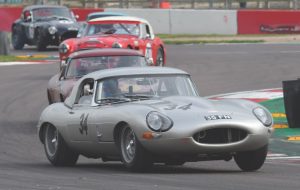 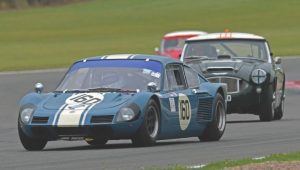