Devenport and Baker Come out Tops at Laguna Seca

The First Orion Monterey Motorsport Celebration is a new race event, organised and promoted by GT Celebration.  Along with the GTC grids, the Porsche Sprint Challenge North America West and Ultimate Track Days participants, the event included the Masters USA Formula Atlantic Plus and Masters Endurance Legends USA grids in their first outing of the season.

In lovely Californian spring weather, once morning fog gave way to warmer temperatures and blue skies the weekend of 1-3 April opened with practice for both grids on Friday afternoon.  Danny Baker (Ralt RT1) and Jim Devenport (Oreca 03 LMP2) topped the charts in Formula Atlantic Plus and Masters Endurance Legends respectively, with Baker going on to win both races.  In the first race a lap 3 incident between Dalmo de Vasconselos (Ralt RT1) and Kyle Buxton (March 77B) brought the safety car out for much of the timed race.  Gray Gregory (Chevron B39) left the race with front brake failure as Baker went on to claim victory. 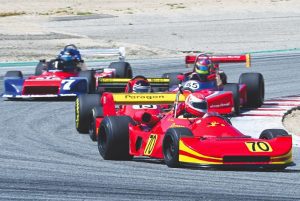 The Formula Atlantic Plus boys got the closing race of the meeting on Sunday and Baker once again led throughout, with Wade Carter (March 76B) in close pursuit.  Persistence and stamina were not in short supply farther back, with a fight for third lasting until lap 16 when a faulty exhaust robbed Steve Cook of a podium chance in his recently acquired and highly original Chevron B27, once raced by James Hunt.  Todd Willing (March 78B) would be rewarded for his efforts with a podium after battling Cook two laps earlier for third.

It was the same podium in Sunday’s race, except this time Spencer Trenery (Riley MK XI Gen 1 DP), who’d been delayed in race 1, used traffic cleverly to come third, winning the DP class in the process.

Charles Persico finished Saturday’s race 1 in his Ginetta 57 but a failed clutch meant he could not enter the Proto 3 class car for race 2.  Rather than sit the race out, he took to the wheel of an Audi R8 GT3 LMS Ultra and from the back row, having not raced in the car before, finished 11th overall and 3rd in the GT3-3 class.