Lithe Lotus Elans are ideally suited to the sweeps of the aerodrome circuit, where Jon Fletcher and Richard Jenvey were among the stars of Modsports races in the 1970s, thus the Hancocks and 2019 winner Paul Tooms were the men to beat.

The Hancock car, in which they finished an astonishing fourth in last September’s Spa Six Hours had not been used in the interim.  Nonetheless Anthony had a shock in Friday testing when its left rear wheel departed at the flat-out Church corner, but not before Ollie had posted a low 1m29-second lap (an average of over 95mph), almost certainly the first FIA Appendix K 26R-spec Elan inside the 90-second barrier.  Tom Ebbs repaired the car for Sunday qualifying, replacing both stub-axles.

Allen Tice/Chris Conoley qualified their Marcos 1800GT on pole with 1:31.766, with the Hancocks and Tooms close behind. The 39-car field’s Touring Car split was led by Ollie and Mel Streek (Lotus Cortina) and Dan Williamson (Falcon Sprint).

Tooms led initially from Hancock Sr, but long-distance specialist Tice outbraked Anthony a couple of times into the complex to give Paul breathing space as he acclimatised to his Elan, rebuilt since last August’s Oulton Park shunt.

First to make the mandatory stop was Tooms, after eight laps, freeing Hancock.  He went five more laps, scrabbling clear of Tice who put Conoley in after 15.  Stephen Bond then had a lap in front, before pitting his red 26R for Cliff Gray to finish. 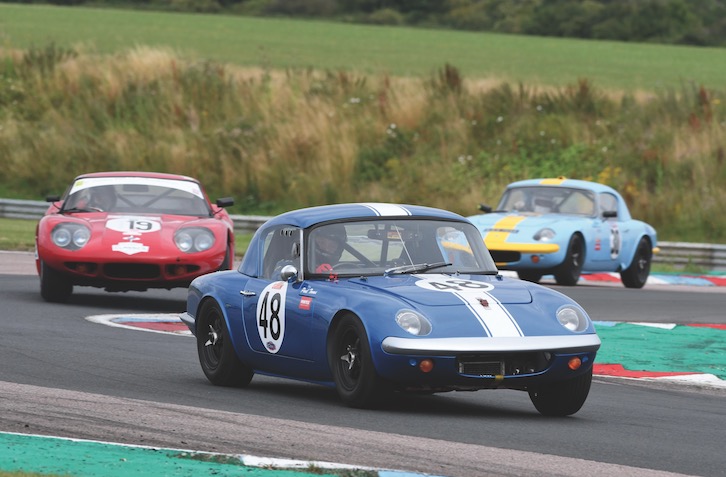 By that stage Hancock Jr was flying, Ollie setting a new lap record of 1:29.618 (94.64mph) as he screamed to victory. Tooms had no answer, his brakes overheating, but kept second 32 seconds adrift as the Marcos challenge faded.

Fourth, a lap down from the back, having run the wrong tyres in qualifying, was the TVR Griffith of Peter and Nathan Dod.  Nigel Winchester was a grand fifth in his Ginetta G4, narrowly beating Roddie Fielden’s Shelby Mustang GT350.

Driver of the race, though – and lauded by the marshals for his commitment, consistency and inch-perfect lines – was Luke Wos who finished an excellent 10th in his immaculate Wosp Performance Turner Mk2, powered by a 1650cc Ford engine.