Arriving on the international concours scene at the highest level in 2014, the Chantilly Arts et Elegance Richard Mille has continued to progress both in terms of spectator attendance and the richness and rarity of the cars entered for the various  concours.  This year, 20,000 spectators were seduced by nine cars in competition for the Concours d’Élégance and by the almost 100 cars that came from all over the world for the Concours d’État,  Amongst the most beautiful cars in the world, they were all contenders for victory in their respective classes and for one of the two supreme Best of Show titles awarded according to their age.

The presence of 40 clubs assembling 700 cars that were on display in the Chantilly domain was also an integral part of the event, and they participated in the success of the big garden party in which the public was invited to take part. 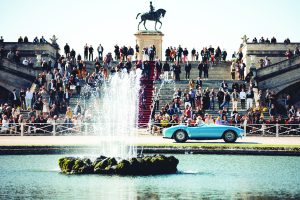 Harking back to the 1920s, an era when cars, personalised by the famous coachbuilders of the day, went on show accompanied by women wearing the latest creations of the great names in the world of French fashion, nine cars were judged at this sixth edition of the Concours d’Élégance.  The superb Aston Martin DBR22 concept car, a reminder of the spirit and the lines of the famous DBR1s and DB3Ss, was proclaimed the winner by the judges, and, perhaps less elegant, but just as original and very spectacular, the Renault R5 Turbo 3E won the prix du public. 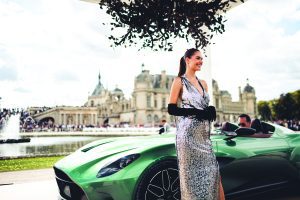 Best of Show for the Concours d’État went to the extraordinary 1938 Hispano-Suiza H6C Dubonnet Xenia owned by the Mullen museum in the pre-war category, and the post-war Best of Show prize went to the lovely Franco-Italian creation of the 1950 Talbot Lago T26 GS Barchetta bodied by Motto.  This racing car was crashed in one of its first races and re-bodied by the Italian designer in 1952. 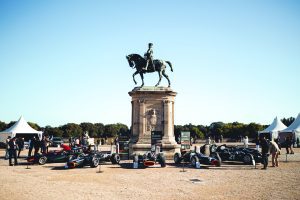 Richard Mille, well known for his watches, of course, but also for his collection of Formula 1 cars and for his enthusiasm for the BRM marque, has acquired a number of BRMs from the Donington Collection.  Many were on show hors concours at Chantilly.  These, along with other Mille cars will soon be housed at the Le Mans Museum. 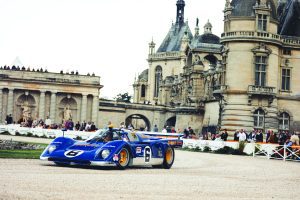 The specially-commissioned centenary Le Mans Trophy, to be awarded to next years 24-hour winner, continued its Tour du Monde with a stop at Chantilly.

With a Le Mans theme this year, amongst many other racing cars, the stunning Penske Ferrari 512M driven by Mark Donohue and David Hobbs at Le Mans in 1971 from the Guikas collection, won its class. 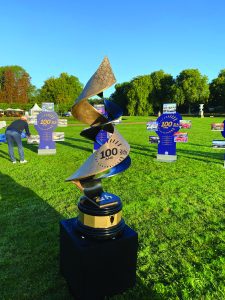