Bumper entries mark the resumption of the French rally season

After the long break between the Touquet Pas-de-Calais rally in March, and the second round of the French Historic Rally Championship, the Rallye de la Châtaigne finally got under way on 19-21 August.  The 2020 edition offered a concentrated route with more than 160 special stage kilometres with the city of Autun, in Bourgogne-Franche-Comté, as its hub.  A record attendance of 171 competitors in modern cars, 57 in VHC and 22 in historic regularity, with waiting lists, welcomed the return of the French Rally Championship.  Competitors praised the organisers for their forethought in ensuring the safety of all the participants and spectators in the light of the COVID restrictions and remarked how well-run every aspect of the rally was.

In the historic speed competition, past WRC driver, Alain Oreille, with wife Sylvie as usual on the notes, was the star of the show, untouchable in his 911 Porsche, finishing over two minutes ahead of reigning French Historic Champion Alain Foulon’s Ford Escort RS and winning 11 of the 12 special stages outright, and fastest in all 12 in his category.  Foulon’s challenge was hampered by a fuel pump failure on the first stage, but he and co-driver, Sébastien Mettai, finished third overall and second to Oreille in the crucial group 1/2/3/4 category.  Benoit Chavet and Pascal Boyer in their BMW M3 drove the only group N/A/B car to outclass them for second overall and victory in their category.

Christophe and Anne Baillet won a three-Porsche race in the regularity section. 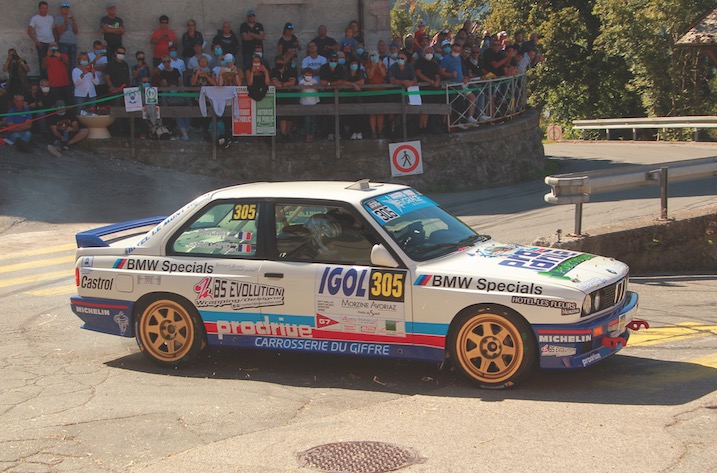 Leader for half the Mont Blanc rally, Alain Rulland in his BMW M3 fell back to third but suddenly went on the attack in the very last stage to pulverise last year’s winner, Pascal Perroud, taking over 18 seconds off him in the stage and nally winning the rally by 6.8 seconds

Next on the French Calendar was the Rallye Mont Blanc, on 3-5 September.  Once again there was a full house, with 315 entries of all categories including 58 in historic competition.  Alain Rulland, accompanied by Xavier Machet, proved himself to be king of the Alpes in his BMW M3, fastest overall and winner of his category.