*(other pouched fruit drinks are available)

The presence of a golden orb in the sky above Castle Combe for the 10th anniversary Autumn Classic on September 24 was a welcome novelty for competitors and spectators following several soggy editions.  Long hailed as the most relaxed on Britain’s historic calendar, the event attracted some sensational cars and provided some superb racing, none better than in the returning GT & Sports Car Cup’s inaugural Group 1 Touring Car sibling. 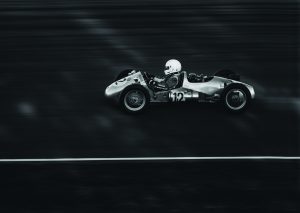 In a waft of methanol, the 500cc Formula 3 cars gave onlookers a flavour of Castle Combe’s 1950s’ roots.  There was no stopping Alexis Wilson who clinched the 500 Owners Association championship in father Chris’ Cooper-Norton Mk10.  Simon Dedman led the chase in a similar car, under pressure from Andrew Turner, flying in the JAP-engined Mk9 his father John bought in 1967. 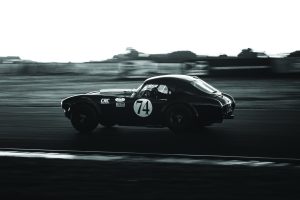 The Chiles Cobra took its second GTSCC win of the season

Three Maseratis practiced for the Griffiths Haig Trophy double-header, celebrating the trial event which effectively founded the HSCC in 1966, but Richard Wilson’s ex-Jim Hall/Carroll Shelby 250S broke its final drive in the FiSCar race, leaving Richard and Tania Pilkington’s 300S and Rebeca Rettenmaier’s A6GCS to play.  As at Silverstone in May, the Cadillac V8 Allard J2 of Oliver and Tim Llewellyn proved unbeatable – not that Tony Bianchi (Allard Farrellac) stinted in his pursuit.  The zippy Lola Mk1s of John Chisholm and Tim Reid – both raced by Lord Angus Clydesdale in the ‘60s’ – were not far adrift on pace.

Jonathan Abecassis, whose grandfather George won the 1955 Redex Trophy sportscar race here in a works-entered HWM-Jaguar, repeated his 2019 FiSCar win in his Austin-Healey 100M.  Richard Woolmer (Elva Courier) led to the mandatory stops before relaying to dad Paul, but Abecassis overhauled him in a Woolmer Performance Classics one-two.  Third and fourth were the Lotus Elites of Robin Ellis and Andrew Mitchell – whose delightfully patinated but little raced example, originally registered to The Chequered Flag, Graham ‘LUV 1’ Warner’s dealership in London, was finished spiritedly by second generation Elite racer Richard Fores.