One hundred and eight rather special automobiles gathered in southern France for the annual International Bugatti Meeting, this year organised by Club Bugatti France on 12-19 June. These iconic examples of motoring that were built in Molsheim between 1910-1939 congregated in the village of Najac for a week.  There were entrants from 18 countries across Europe, North America, Japan and Australia who came to enjoy the 1200km route, sample some of the Occitanie region’s best driving roads, and celebrate the brand’s history.  Among the diverse fleet of automobiles were two outstanding creations from the famous French marque, the 750kg lightweight Type 35 “Grand Prix de Lyon” from 1924, and a 5000cc Type 54, one of four to remain in existence. 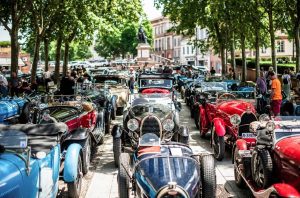