Spring-like weather conditions contributed to an epic 17th edition of the Bosch Hockenheim Historic – Jim Clark Revival on the weekend of 6-8 May.  Some 30,000 motorsport fans, finally released from all the COVID restrictions, flocked to the Hockenheimring to enjoy a range of races and demonstrations over the three-day event, with some 500 participants in eleven racing series taking to the track over the weekend.  Marcel Hundscheid reports… 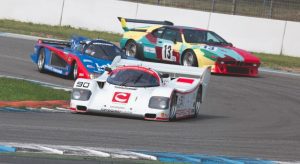 The Bosch Hockenheim Historic organisers managed to put together a faultless event to kick off the German historic motorsport season just eight months after the 2021 edition, postponed due to the pandemic.  Single seaters ranged from the Formula Juniors of the Lurani Trophy of the early ‘60s to Manfred Winkelhock’s Ralt Formula 2 from 1979 to Ingo Gerstl’s 2006 Toro Rosso F1, running in the Boss series.  Touring car fans also got their money’s worth, the FHR’s Gentle Drivers Trophy and the Colmore Youngtimers fielding big grids containing tin tops from different eras.

In memory of the tragic accident of Jim Clark, a competition for historic Formula 2 cars has always been an important part of the programme.  The Scottish farmer lost his life in a wet Formula 2 race on 7 April 1968 at the Hockenheimring and in his honour, the HSCC was present with the season opener of its F2 International Championship, bringing 16 epic Formula 2 cars to the grid.  Many of the UK-based drivers elected not to come, leaving the continentals to rule the roost.  Is the reluctance because of the carnet requirement?  In any case, Swiss driver Thomas Amweg took pole and both races, as favourite Matthew Wrigley was plagued by technical difficulties in his March 782 on Friday and took no further part.  Runners-up on Saturday were Wolfgang Kaufmann  and Matthew Watts, both in March 782s, but on Sunday Kaufmann dropped out halfway through and left Watts to finish second ahead of Mark Charteris. 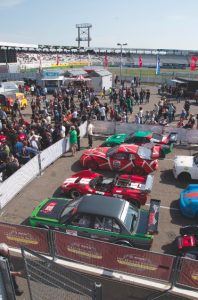 Thirty thousand spectators meant it was a busy paddock

The fastest and by far the noisiest cars on track were the former F1 and GP2 cars of the BOSS GP Series.  Austrian Ingo Gerstl claimed pole in his Toro Rosso STR1 in a stunning 1:21.093.

Another crowd puller was the return of the Group C Supercup in an initiative to bring the excitement of this great series back to racing fans.  The rebirth of this series, open to former Group C cars took place at the 2021 Hockenheim event and this time ten former Group C1 and C2 cars entered the first race, accompanied by three BMW M1’s and a CSL.

Manfred Rossi di Montelera claimed pole for the first of two Formula Junior races in his Lotus 22, with Marco Werner lining up alongside in a similar Lotus.  However, Werner only lasted a lap and Rossi was overhauled by Roberto Tonetti, who took the chequer 0.3 of a second ahead.  Philipp Buhofer completed the podium.  Second time out Werner stayed in the hunt to finish fourth behind Tonetti, Rossi and Stéphane Rey (Lola MK5A)

For a fuller reports see our June 2022 issue…