Including post- sale arrangements, just five of the 76 cars offered at the Bonham’s auction at the Goodwood Members’ Meeting failed to sell, with nearly a quarter selling for over top estimate, some by a significant margin: a 1964 Aston Martin DB5 that had been off the road since 2018 made a huge £506,000 including premium, a full £156,000 over its top estimate, and well over Hagerty’s Condition 4 (‘Fair’) value of £318,000. 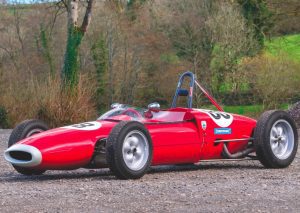 Hagerty, the classic car insurance, and now event, company, reported that the lots that struggled to sell were the competition cars with four of the five no-sales in this category.  The highlight was a 1961 Lotus 20, driven to Formula Junior championship success by Jo Siffert, but the tempting low estimate of £70,000 wasn’t reached.  A brace of race-prepared Corvettes, a Lynx T2 and a 1964 Lotus-Ford 23B also did not sell.