With a new organiser taking up the mantle, the longest standing historic event in the world was looking to wash away the memories of COVID and last year’s floods, even though its club-sized meeting in 2020 proved anything but unpleasant.  Having been forced to postpone its 49th edition for a year, the 2022 Oldtimer Grand Prix did feel like a fresh start, with Masters, the HGPCA and Formula Junior returning to add to the numerous local series.  Mattijs Diepraam reports… 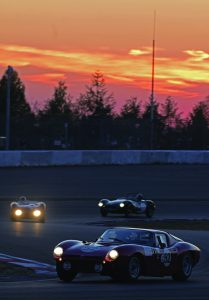 For three days the sun shone on the Oldtimer Grand Prix.  With ambient temperatures up to 30 degrees, and none of the usual fog and rain in sight, this was a Nürburgring as you’ve rarely experienced it.  What’s more, spectators swarmed towards the track in droves, leading to queues into the car parks – something usually only associated with the Goodwood Revival – while the grandstands and paddock area were pleasantly filled with people.  Also creating a difference were the cheerful paddock marshals making new arrivals feel welcome.  Figuratively speaking, though, several clouds hovered above the freshly relaunched event. Its inexperienced new organiser with a background in hillclimbs was still learning the ropes, at times obviously so, with a number of arrangements and procedures that proved to be an education in progress for the new team.  Let’s hope for the event, of which the continuation was recently guaranteed until 2028, that they use these experiences to improve for next year. 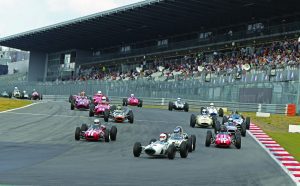 Michael Gans (Cooper T79) and Will Nuthall in the older Cooper T53 (No. 10) dominated both HGPCA races. Gans won the first but struck trouble in the second race, handing the win to Nuthal

With continental Masters entry lists now averaging between 15 and 20 cars as we get used to the new realities of this post-COVID/Brexit/war/inflation era, its Oldtimer Grand Prix numbers neither surprised nor disappointed, mostly thanks to a healthy German contribution. In the other Masters series, these often two-timed with similar local FHR varieties on the programme.  As at the Red Bull Ring and Zandvoort, German preparer Britec brought an assortment of machines from the Black & Gold Collection, lined up for pro drivers Michael Lyons, Nick Padmore and local hero Marco Werner, while Steve Hartley continued on his promise to be at every one of this year’s Masters Racing Legends rounds for 1966-’85 F1 cars. 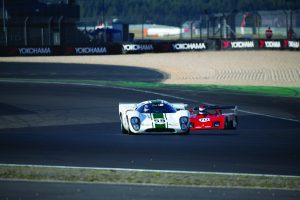 Steve Brooks in his Lola T70 Mk3B worked hard to fend off Manfredo Rossi’s Abarth Osella PA1 in the Masters Sports Car Legends race but the Italian was forced to give up the chase after he was handed a stop-and-go penalty. Photo Peter Heil

Both HGPCA rounds seemed to centre around Michael Gans in the Cooper T79 and Will Nuthall in Giorgio Marchi’s much older ‘lowline’ Cooper T53.  On Saturday, the American hit the front on lap 2 to maintain a three-second gap to Nuthall until the end.  It looked like more of the same on Sunday, but this time the T79 failed on lap 8, handing the win to Nuthall.  As they trailed the two leaders, the best racing involved the Brabham BT3, BT3/4 and BT4 of Barry Cannell, Tim Child and Michel Kuiper respectively. 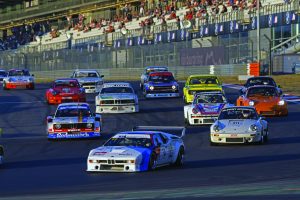 The Deutsche Rennsport-Meisterschaft cars get under way

Among the 21 of his Formula Junior rivals, no-one could stop Manfredo Rossi from claiming two emphatic Lurani Trophy wins.  Steve Brooks and Martin O’Connell took a commanding win in the Masters Sports Car Legends, Brooks doing the hard work in his Lola T70 Mk3B by fending off Manfredo Rossi’s Abarth Osella PA1 before the Italian was forced to give up the chase after he was handed a stop-and-go penalty for failing to adhere to the proper start procedure.  Meanwhile in Masters Endurance Legends, the German anthem was played twice, but Marco Werner stood on the top step of the podium only once.  With no LMP1 cars on the entry list, the LMP2 entrants were fighting for overall victory this time. On Sunday, a stop-and-go penalty for Werner allowed for a shock debut victory for Yannik Trautwein, who in his first-ever weekend in an LMP2 car, grabbed the spoils in his newly acquired ex-Dempsey Racing Lola B12/80. 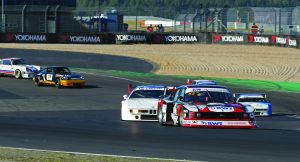 Many of the local cars – several of them run by Rhea Sautter’s Gotcha operation – featured on a 15-car Masters Gentlemen Drivers grid, with victory going to young German Leon Ebeling and his British co-driver Andy Newall in one of Gotcha Cobras. 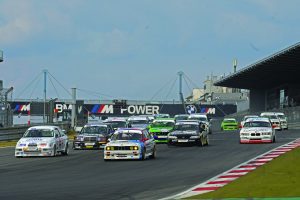 The DTM Classic Cup races provided a fabulous grid that contained cars from the Volvo 850 T5 to the ex-Gerd Ruch Mustang 5.0 GT

More sportscars and GTs came to the fore in FHR’s Dunlop Gentle Drivers, and here Felix Haas dominated both races to beat Georg Hallau’s similar Lotus 23B.  On both occasions, Hallau was run close by the Scuderia Colonia Ford GT40 shared by Pedro and Luco Sanchez.  In a veritable bonanza of racing opportunities, the FHR also brought the ‘HTGT um die Dunlop Trophy’, which mainly features cars from the ‘66-‘81 era of GT and touring car racing, but with some pre-‘66 cars thrown into the mix as well.  In his Ford GT40, Michael Funke led the first 24 laps, but Nick Salewsky’s Porsche 911 Carrera RS took home the win.