Held in beautiful October weather, the Brooklands Museum staged its annual Autumn Motorsport day mid-month and attracted a large crowd to the historic site in Surrey, reports John Whiteman.  An Autotest was held on the Finishing Straight and there were runs on the Test Hill, but the main action took place on the adjacent Mercedes-Benz test track and skid-pan. 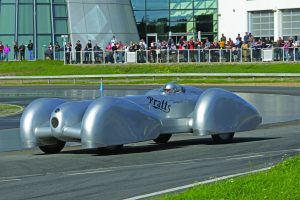 Star attraction was the Streamliner C16 all the way from Sweden.  The car, modelled on the 1938/9 Mercedes 3-litre built to take standing start class records, is the brainchild of father and son Carl-Erik ‘Kalle’ and Glenn Billqvist and is powered by two Buick straight eight engines coupled together.  The Billqvists are serial builders of American powered projects and were joined in the Streamliner enterprise by a team of six other engineers and specialists.  The team are no strangers to these shores having already travelled to Pendine Sands in Wales earlier in the year in their converted 1970 Scania ex-removal truck ‘Mr. Olsen’. 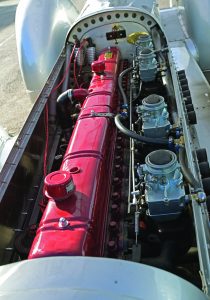 Due to its limited lock the car was confined to the outer, dry, limits of the skid-pan while the rest of the entry sampled the test track.  Historic cars included a Cooper T39, Tony Jardine guesting in a Cooper T72 sold new to Belgium and normally found on display at Brooklands, Julian  Grimwade’s Frazer Nash, one of the Pilkington family Alfa Romeo 1750s and an ex-Charles Pozzi Ferrari 365 GTB Competition Daytona that ran at Le Mans and in the Tour de France in 1972.  Backing them up were numerous Abarth, Fiat Abarth, Alfa Romeo and Lancias. 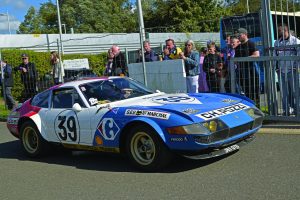