HERO/ERA has planned a stunning event for September that will take crews through some of Europe’s most beautiful and historic scenery and reads like a bucket list of must-see attractions of the ancient world. The Temple rally will leave Athens on 1 September and head through Greece via Central Arcadia and the Mani Peninsula, with visits to such famous sights as the Corinth Canal, the Epidavrus Amphitheatre, Nafplio and Ancient Olympia. After an overnight ferry to Bari, next on the agenda will be a tour of Puglia, stopping at Matera, and winding along the craggy coastlines and ancient Greek temples of Basilicata and Calabria, for a crossing to Sicily. A three-day Giro di Sicilia will include a drive of the Targa Florio circuit, the Valley of the Temples at Agrigento, a close-up of Mount Etna, and a rest day in Taormina. What more do you want? Maratea and the Amalfi Coast, of course, and a final run into Rome for a gala prizegiving, 13 days after leaving Athens. There are classes in this regularity event for pre and post-war cars up to 1986, and there are even arrive and drive options for cars hired from the HERO events team. See the HERO/ERA website for details and entries. 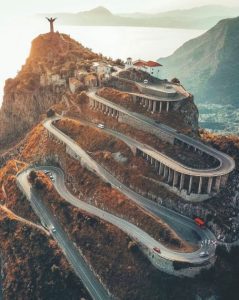 The Christ of Maratea, built of pure Carrara marble in 1965 by Bruno Innocenti atop Monte San Biagio