The Swedish Racerhistoriska Klubben and the Anderstorp Racing Club jointly organised the fourth round of their 2022 championship at Scandinavian Raceway Anderstorp, their first visit to the southern Swedish circuit since 2013.  Close to 200 drivers participated, including the guest grid NKHTGT from Holland with their pre-’66 GT and touring cars.  Some Swedes took part in the Dutch heats and some Dutch took the opportunity to enter the Swedish races where they enjoyed driving on the 4.02-kilometre ex-F1 circuit in very mixed weather conditions.  Indeed, it rained all day on Saturday, while on Sunday there was some sunny respite between showers. 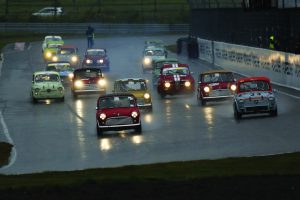 It rained all day on Saturday, providing much fun for the Minis and smaller cars Photos Bengt-Åce Gustavsson

Swedish regular in the Dutch Championship this season, Kennet Persson, was on pole for the NKHTGT in his mighty Ford GT40 ahead of his countryman, Hans Beckert, who had a great time surfing his Mini Cooper around the track in a very wet qualifying session.  But come the less wet race Beckert had a tough time defending himself against the more powerful cars as Persson sped ahead.

In the big saloon car heat for pre-‘66 cars and pre-‘71 cars under 1300, Dante Rappange, son of NKHTGT stalwart Rob, was on pole, the first of five Mini Coopers that monopolised the front rows in a wet qualifying. But it was Anders Jensen, who had missed qualifying in his Ford Escort 1300GT and started at the bottom of the grid, who quickly worked his way though to take a commanding victory ahead of Beckert and Jaap van der Ende (Ford Falcon). 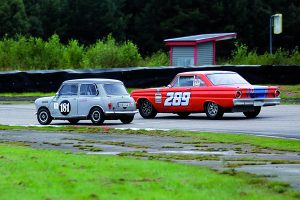 Ende recovered and fought his way back up to the lead, but it was Beckert who won in the Mini after an audacious overtaking manoeuvre in the last corner

Kennet Persson took his GT40 to two convincing pre-’66 GT wins, with Pekka Nyström shadowing him both times in his cool Cheetah GT.

In the newer Saloon and GT heat for cars up to 1990, three Datsun 240Zs topped the qualifying, with Danish brothers Mads and Per Leth Sörensen split by Wåge Sörman.  Sörman got away first in heavy rain, which favoured old rally fox Bo Warmenius in a Ford Escort 1600 RS, who took the lead on lap 5 just as the heat was red flagged after a spin-off.  There was no time for a restart, so per the regulations, the results were wound back a lap and Mads Leth Sörensen stood on the top step of the podium.

Richard “Lillen” Persson remained under constant attack by Johan Lund and Håkan Green in a 30-car Formula Vee field, the trio finishing in that order.

An exciting and close Formula Ford race resulted in a win for Håkan Tagesson ahead of the battling  Nicklas Nilsson and Henrik Hansson.  Hans Hillebrink was the only driver in Formula Vee-D class, and thus the only one on rain tyres.  He started from last place on the grid but was soon in the lead.  Unfortunately, he had engine problems and ended his race midfield.  Nilsson took a safe victory in race 2 while Hillebrink and Tagesson fought hard until the last metre. 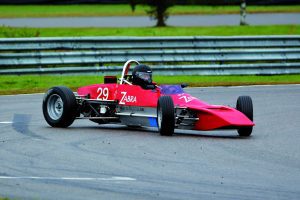 Formula Slicks had the worst luck with the weather of the weekend. There were no slicks at all, only rain tyres.  Jan Fredriksson (Reynard 883) had the race of his life scoring a clear win ahead of Peter “Lill-Orsa” Bohlin’s Ralt and Tomas Andersson’s Formula Opel.  Unfortunately, Fredriksson disappeared early in the second race where instead “Lill-Orsa” took the most superior victory of the weekend, winning by 53 seconds ahead of Andersson and Thomas Rådmyr.