For the second year running the Aleria district Historic Rally in Corsica offered separate tarmac and gravel events in one location on 9-11 June.  What’s more, it had a classical theme in keeping with the history of this beautiful island.  The lucky finishers were even greeted by a pair of female Gladiators at the victory arch, which wobbled as if from an ancient earthquake as the winning teams celebrated on the podium. Frédéric Lombard reports..

Dominique Savignoni, Sabrina De Castelli and the team of volunteers at ASA Restonica bet on organising two rallies in the same week in the Aléria region of Haute-Corse and came out winners again.  Crews could engage in an asphalt rally comprising 11 special stages and also participate in the gravel rally comprising 12 timed sections.  Drivers could participate with the same car in both events, change cars for each rally or do only one event of their choice. 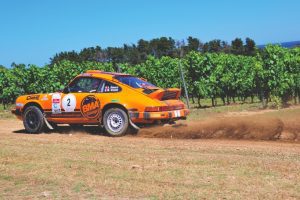 At the start of the asphalt rally 22 VHC and two VHRS (regularity) crews set off late on Monday afternoon for a prologue.  Christophe Casanova, winner in 2021 in a BMW M3, immediately took the lead, followed by the legendary François Delecour (Escort RS2000 Mk1) and Olivier Capanaccia, also driving a BMW M3.  The next day, with five stages on the programme, Capanaccia won four to become the new leader by 19secs, ahead of Casanova and Jean-Paul Villa (Ford Escort), while Delecour fell victim to an electrical problem that led to retirement.

The last day of tarmac racing saw five stages, including one, SS10 (30 km), that without doubt was to be the greatest decider.  Casanova signed three stage wins to finish 19secs up from his rival.  In the end only 13 cars from 22 starters made it to the finish, leaving Christophe Capanaccia ahead of Casanova and Alain Deveza (Porsche 911c), who took the points for the overall Trophy classification since the two BMW M3s were not entered in the gravel rally.

The Roman gods provided a nightmare for the crew of the sixth-placed Lancia 037 (ex-Tabaton) driven by Patrick Canavese, when the car ignited and burned completely on SS 10.  Fortunately, the occupants just escaped unscathed.  In VHRS (Regularity) Thierry Girard (Datsun 240 Z) showed complete supremacy after his only opponent Jean-Jacques Compas (BMW 2800) retired after SS1. 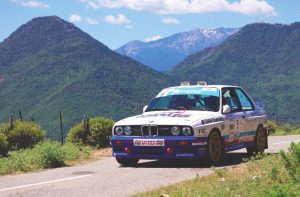 On Thursday, the cars were reconfigured into gravel versions, some even changed their mount altogether (Casanova, Villa), with 20 at the start for the 12 stages ahead.  From the prologue on Thursday evening Pierre Vivier (Lancia Delta) set the best time just ahead of Richard Doux (Lancia Delta) and Alain Deveza (Porsche 911), 6secs behind.  Friday promised to be a hot day for all these gods come to earth, with three stages to be completed twice.  Casanova went off the track, Doux made a mistake in the SS and received a penalty, but then won two stages before retiring altogether in the next one.  Alain Deveza was in festival mood with four scratch wins, giving him a lead of 1’55″ over Jean-Pierre Raffalli (Lancia Delta) and 5’26’’ over Ludo Duprez (Porsche 911).  The next day, Deveza consolidated his position and the Var driver won ahead of the Lancia Delta of Raffalli at 3’09″ and Duprez at 9’01″.  He also took the overall Trophy ahead of Maurizio Elia’s Escort.  The friendly Luisa Zummelli (Porsche 911) won the women’s classification and there was a notable fourth place for Anne-Charlotte Rousseau who was making her debut on gravel.  Only 10 crews finished the gravel event, too bad because this very beautiful new event, mixing both disciplines, deserved better.  It should be noted that in Corsica, it was one of the five historic events within barely a month, something that maybe needs to be reviewed.  Nevertheless, congratulations to the organisers, Doume and Sabrina, because despite all the pre-rally difficulties they never gave up.  An example for some organisations to follow.