Carol Spagg writes –  We have lost yet another giant in the world of historic Motorsport, in fact someone who helped kick the whole movement off. While pursuing a successful career as a privateer in what was then modern motorsport, he also found time to collect and race historic cars. Collector, broadcaster, historian, journalist, raconteur, Spitfire pilot, tour guide, racing driver and good friend to many, Alain De Cadenet died on July 2 at the age of 76. 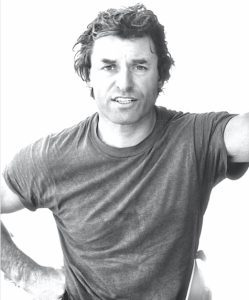 Here is a tribute to him written by his close friend and one-time protégé, James Lindsay…

“In another era Alain De Cadenet would have been a fighter pilot or a Bentley Boy.  As it was ‘de Cad’ was a polymath in all things that mattered.  I was fortunate enough to be taken under his wing when my father died in 1986 having become the custodian of an Alfa Romeo Monza 8c.  He was very much there to guide, support and mentor me, along with my brothers Ludovic and Valentine, with ideas of what to do with the cars and planes, but above all, he was so energetic and got us involved in the same events and adventures that he enjoyed.

A decade of mad dashes across Europe and the UK, as we took part in rallies, races and trips in our Alfa Monzas, aeroplanes and motorbikes followed. The Mille Miglia and Carrera Panamericana, trips to Sri Lanka, Thailand, Alain’s Chateau in France, where often there would be some famous musician, racing driver or celeb he’d picked up somewhere while we all just mucked in, cooking some stir fry were the experiences that dominated our ‘80s and ‘90s.

And who could forget his unique descriptions or phrases, his mischievous giggle, the knowledge and passions he had in stamps, photography, Victorian paintings, machinery of all sorts, history, you name it.

In later years it was always wonderful to see him at Goodwood or Pebble Beach as he cut a dash in his immaculate attire sporting a Leica on a lanyard around his neck, vintage watch, round framed sunglasses and his loved hand knitted Alfa Romeo sleeveless sweater. He was so much to so many and all of our lives would have been so much poorer without the part he played in them.”

To his wife Alison, his children Amanda, Alexander and Aiden and to all whose lives he touched, we extend our sincere condolences. Rest In Peace