Julian Thomas was a dominant winner of the first race, as he passed  2013 British Touring Car champion Andrew Jordan on lap two and pulled out a 16-second lead, both drivers in Cobra Daytona Coupes.  James Cottingham in his Shelby Cobra was a lonely third but doing his utmost to keep contact with the leaders.  Further down, the battle for fourth place between two TVR Griffiths was terrific, with John Davison leading John Spiers for the first two-thirds before Spiers got past.  However, Davison never gave up and stayed within three-tenths of a second behind to the chequered flag. 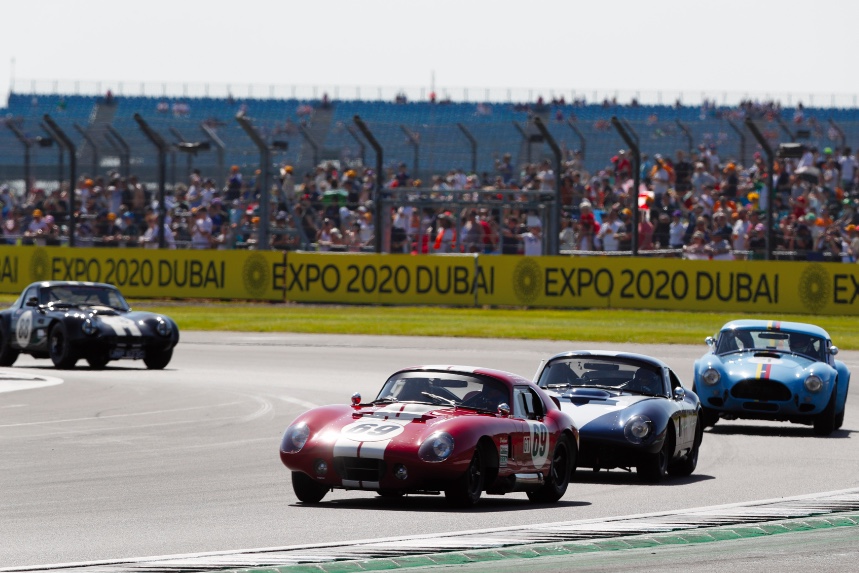 The second race ended in drama as the two leaders continued their battle.  As on the previous day, Jordan made a demon start to get the jump on Spiers and lead the pack into Abbey  with Thomas breathing down his neck.  Thomas repeatedly tried for the lead and each time drifted wide allowing Jordan to reclaim the place, but on lap eight he finally made a move stick and took the lead.  But it wasn’t over.

This time he couldn’t shake Jordan, who applied plenty of pressure, using all the tricks he could find, flashing his headlights to distract his rival, and forcing a couple of inconsequential errors out of Thomas.  He made his final charge on the last lap.  Drawing level with Thomas on the approach to Stowe, both braking as late as they dared, Jordan’s car slid slightly, and just clipped Thomas who was turning into the corner, causing both cars to spin.  Thomas recovered ahead of Jordan but by then James Cottingham was in the lead to take a surprise win.  He was followed through by the two Griffiths of Davison and Spiers in that order, leaving Thomas in fourth and Jordan fifth.

Sixth went to Matthew Wrigley again.  Class wins went to Cottingham, Eddie Powell who hauled his Lotus Elan up from the rear of the grid to 10th place, Welch, and Billy Bellinger (Morgan +4).