Frédéric Rouvier has won the French Historic Circuits Championship in the Single-seater/Proto category for the third year in a row.  Aged 42, Rouvier, a native of Cannes, who is an educational manager at Oreca Events, won this new title at the wheel of a March 783 run by Italian team Blue is Blue after having won 9 of the 10 F3 Classic races this season. “It’s great to be champion of France again, especially since this third title was perhaps the most difficult to obtain,” he said.

With eight Coupe de France des Circuits titles in modern cars to his name, Franck Quagliozzi won the historic GT/Tourism category for the second time.  The 40-year-old Mâconnais, a Honda specialist, was competing in his third historic season in the Youngtimers GTI Cup.  He remained undefeated all season aboard a 1990 Honda Civic prepared by the family Honda Quagliozzi Racing team.  “We knew we had to win all the races to be champion.  I didn’t make it last year, and we worked hard to make sure we didn’t miss it twice in a row “ 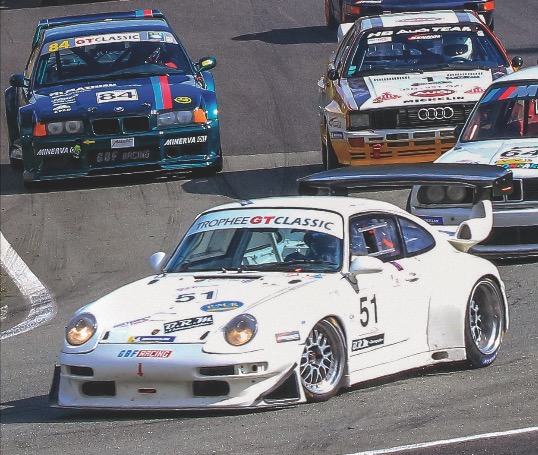 Unlike the other two winners of the Historic Tour, 61 year-old Laurent Sabatier took his first championship title.  The long-time “Porschist”, also undefeated over ten races,  tied with Franck Quagliozzi in the GT/Tourism category to become joint champion.  Racing in the GT Classic series since 2015, his victory was achieved behind the wheel of a 1996 Porsche 993 GT2, exceptionally replaced by a BMW M3 GTR at Nogaro.  “Today’s races weren’t the easiest,” he said after the final round at Val de Vienne.  “I was under tremendous pressure to find myself in this situation where I had the title within reach.”