The wail of two-litre engines reverberated through the trees, traversed the tranquil lake and rent the air above rural Cheshire as the first standalone Formula 2 races at Oulton Park since 1972 highlighted the annual Gold Cup event, entertaining a large audience over the 28-29 August Bank Holiday weekend.  There were many twists and turns across the two-heat feature, the aggregate result deciding its outcome, mirroring many European Championship rounds of the later ‘70s, from which the majority of the entry was drawn.  When heat one winner Andy Smith’s hopes were dashed by engine failure in his March 742, Matthew Watts swept to victory on Monday in his works-liveried 782.

Smith secured pole in 1m34.055s (103.03mph) on the 2.69-mile circuit, finally bettering local ace Andy Meyrick’s 782 time of 2007 - the best anybody could find official records of - and won the first leg as he pleased in his ex-Gabriele Serblin car, motivated by a Ford BDG engine as opposed to its original BMW M12.  Before the pack, from a standing start, reached Old Hall corner in a crescendo of sound, Mark Dwyer (742-BDG) from P7 had burst past Callum Grant (ex-Don Breidenbach 1600cc March-BDA 79B) whereupon a brush of wheels with Rob Wheldon (from P4 in Keith Bisp’s ex-Alex Ribeiro 762-BMW) deflated tyres on both cars.  When Wheldon’s right front gave way as he turned-in to Clearways he tagged the barrier and red flags flew. 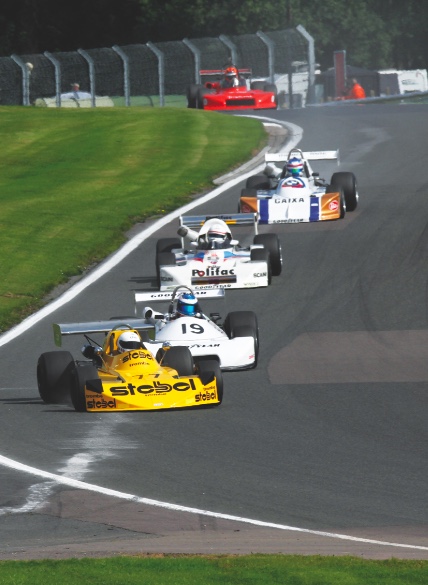 Matthew Watts swept to victory and Gold Cup honours in his works-liveried Polifac March 782, as Miles Griffiths (No 19) retired, and heat one winner Andy Smith’s March 742, (No 77) suffered engine failure

Griffiths snatched the lead as he and Smith careered through Old Hall abreast on Monday, Andy settling into Miles’ slipstream knowing he only had to keep him in sight to land the coveted title and have his name added to those of Stirling Moss, Jack Brabham, Denny Hulme and John Surtees on the Gold Cup first awarded in the 1950s.  It was not to be.  Exiting Brittens chicane on lap six Griffith’s engine cut and the white Ralt slowed abruptly on the rise to Hilltop.  The shadowing Smith couldn’t avoid it. 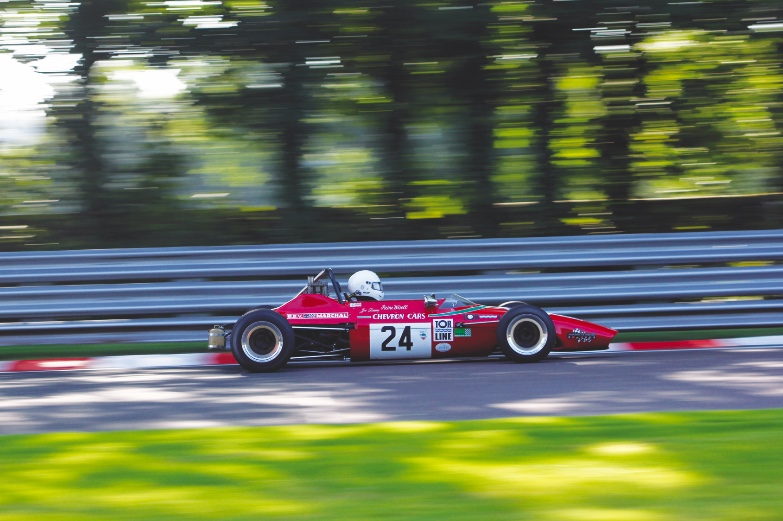 “It was unfortunate,” said Andy, “a case of mirror, signal and manoeuvre, which Miles did, but I chose the wrong side.”  The yellow March’s nosecone was scuffed, and tweaked slightly to the left, but Smith continued, now behind Watts who had torn ahead.  “My initial worry was that it had damaged the radiator (as on the F3 783 he previously raced), so I was watching the temperature gauge, then I remembered that they are at the back on the 742…”  Having picked himself up and got his head round understeer caused by the deranged nose, Andy closed back in on Watts, only to suffer, “a catastrophic blow-up, with no warning” on lap 11.  Rods through the sump told their own story, and Dwyer’s engine let go two laps later, a legacy of missing a gear he suspected.

Watts thus cruised around patiently to the chequer, playing the role of Marc Surer, twice a winner in Polifac BMW Junior Team 782s in ‘78.  Grant and Murray finished second and third, Murray having just got the better of Mercer.  From the back, prototype racer Wheldon had reached second on the road, but a 35 second penalty for exceeding track limits dropped him to fifth in the heat, still well clear of Harrison and Bletsoe-Brown.  Pancisi earned 1600cc (Pre-’72) honours this time, but only after Stokes was docked 10 seconds for an over-eager getaway.

For a full report of tis and other race meetings, see out October 2021 issue...