Way back in April, when the Modena Cento Ore was postponed to 11-15 October, it seemed like an impossible dream, but the persistence of Luigi Orlandini and his team paid off when a reduced grid of 24 cars in the competition section and nine regularity competitors, as compared to the usual hundred cars, lined up in Rome to celebrate the 20th anniversary of this popular event.

Crews gathered at Villa Borghese in the centre of Rome for scrutineering and then set out for an early evening parade through the city centre, taking in all the monuments and tourist attractions the eternal city has to offer, with some racing cars suffering from being forced to run at such a slow pace. 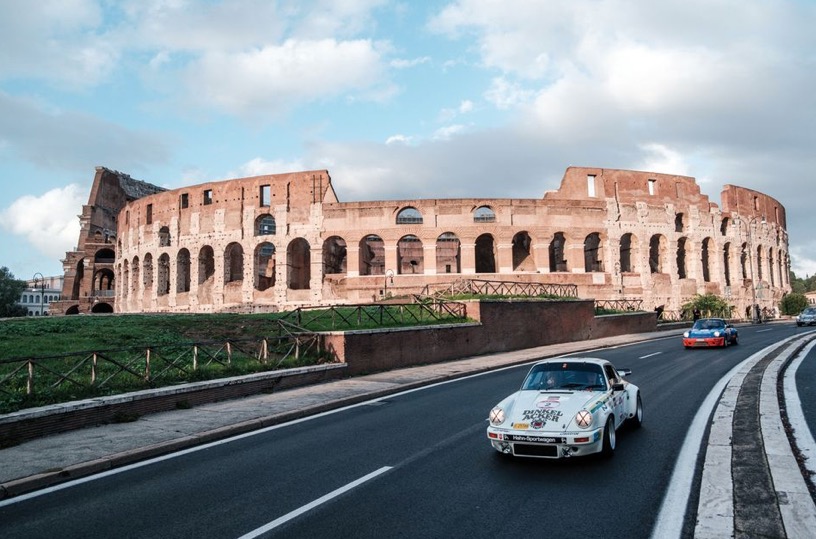 he annivesary event started with a tour of Rome.  Photos Courtesy Canossa Events

The following day, crews drove to Perugia via two runs over the classic hillclimb Rieti Terminillo, steep, but fast if you have the horsepower, while the following day, the cars paraded through some of the hilltop towns that characterise this part of central Italy on their way to Florence, with a stop for racing at the Magione circuit on the programme.   With so few cars they all shared a common grid. 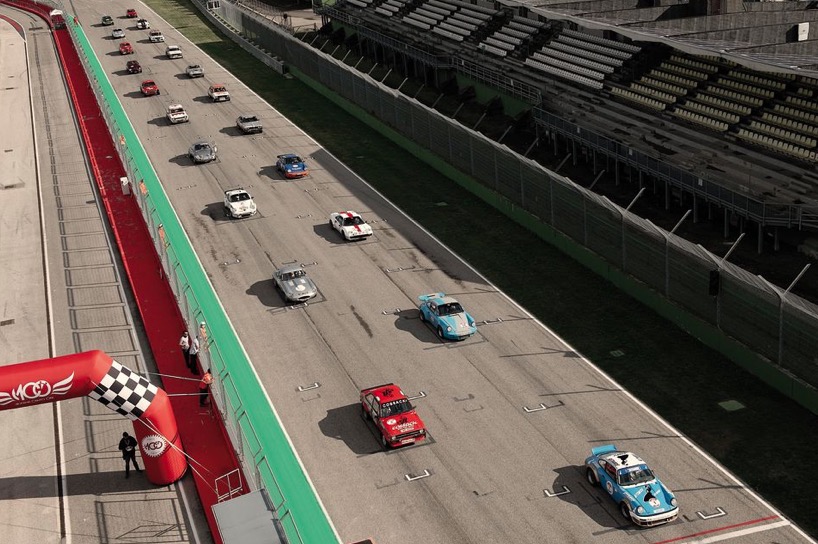 As always on the Cento Ore, there is racing and there is enjoying the sights of Italy, and before the final drive into Florence crews paused for drinks in Arezzo under the Logge del Vasari in Piazza Grande.  Belgians Glenn Janssens and Tom de Geetere arrived at the top of the leaderboard in the Piazza Ognissanti in their Tuthill Porsche 911 SC, with Andrew Siddall and Sebastian Perez 1800 Escort less than 2 seconds behind.  Initial leaders, Kevin and Lee Jones from GTO Engineering, suffered mechanical problems in their Ford Escort RS 1600 and so had dropped down the order.  Richard Evans and John Faux arrived a day late in their Iso Rivolta IR 300, having repaired the clutch that failed during the parade in Rome.  First period F car was Roddie Feilden’s Shelby Mustang, co-driven by Simon Jeffries and the stunning SEFAC Ferrari 250 SWB of Arnold and Melanie Meier, was the first Period E car. 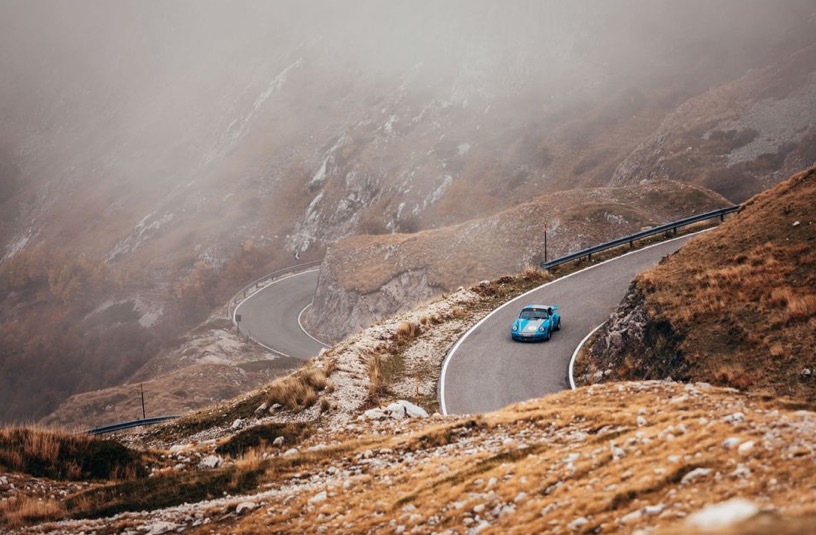 The Kadoorie Porsche continued its winning ways over the stages, but was clearly too far behind to be able to catch up

In the regularity section German crew Stephan Rohleder and Nadia Hahn led in their Porsche 911 2.4T by a tiny margin.

The following day was just as much of a challenge for organisers as it was for the competitors.  First test of the day was on the beautiful Mugello circuit just outside of Florence, where, as the cars lined up on the grid, the rain started.  This soon turned into a storm that brought out the safety car.  The race was able to resume after a few laps, and amongst various spins and offs, which happily didn’t lead to any damage, Philip Lawrence Kadoorie and Daniel Wells, in their Dansport Porsche Carrera RS proved the most agile in the conditions, with Sidall up next followed by Janssens.   The Iso Rivolta showed what it was made of by coming fifth, and Roddy Feilden somehow managed to tiptoe his big Mustang to the line in sixth place ahead of the E-type of Swiss crew Thomas Kern and Stephan Peyer to take Period F honours. 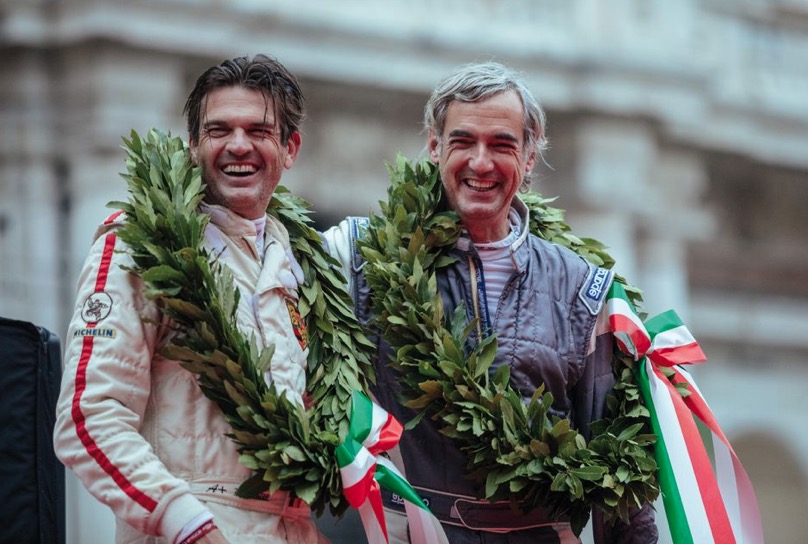 Two stages in the wet rounded off the day without change in the leaderboard.  It was all change, however, for the organisers, when new rules governing distancing and gatherings were published 24 hours before.  The Gala Soirée at Palazzo Vecchio in Florence, planned for that evening, had to be re-routed to the Ballroom of the St. Regis and they were also working on changing the final prizegiving ceremony from the Military Academy of Modena to the Enzo Ferrari Museum.

On the final day, the goal of arriving in the Piazza Roma in Modena was now firmly in sight, but first two more hillclimbs awaited and the best treat was reserved for last, a race on the circuit of Imola.  The day offered, wet, dry, dusty and leafy conditions.  The Kadoorie Porsche was clearly too far behind to be able to catch up, while Janssens’ Porsche enjoyed a comfortable cushion to Sidall’s Escort.  Kevin and Lee Jones were back in their Escort, performing well on the stages, but way behind in the overall rankings. 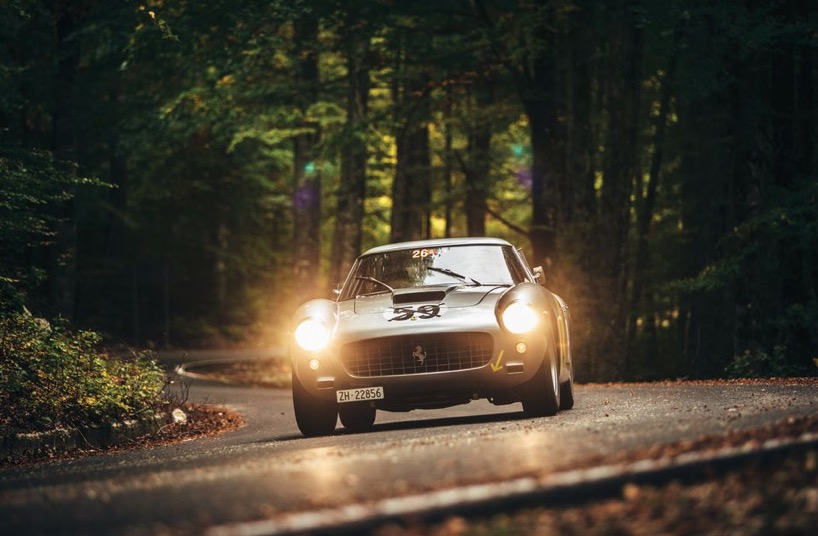 So it was Glenn Janssens and Tom de Geetere that rolled into Modena as overall winners of the 20th anniversary edition of the Cento Ore.  Though they only won one stage outright, their consistency while all around them faltered, paid off.  They were followed by Andrew Siddall and Sebastian Perez, with Philip Kadoorie and Daniel Wells on the third step of the podium, all three cars in the G/I categories.  Period F winner, and an excellent fourth overall was the Swiss Scuderia Apax Jaguar E-type of Thomas Kern and Stephan Peyer.  Louise and Jason Kennedy captured the Period E Trophy and the Index of Performance award, driving  their Lancia Aurelia B20.

Stephan Rohleder and Nadia Hahn maintained their lead in the Regularity section in their Porsche 911.

Competitors, many of whom had braved quarantine and logistic restrictions to get there, were grateful to Orlandini and his team that the event took place at all.  They had seen an autumn Italy, with the leaves turning red and gold and the sun lying low, in stark contrast to the usual mid-summer date.  Canossa Events CEO Orlandini summed it up, “There is no doubt that this was the most difficult edition from an organisational point of view.  I have my team to thank for their commitment and for their prompt action when faced with the never-ending changes in the regulations, as well as the authorities for their advice and support.  But the biggest thanks of all go to all the participants who decided to come and join us on our 20th anniversary”. 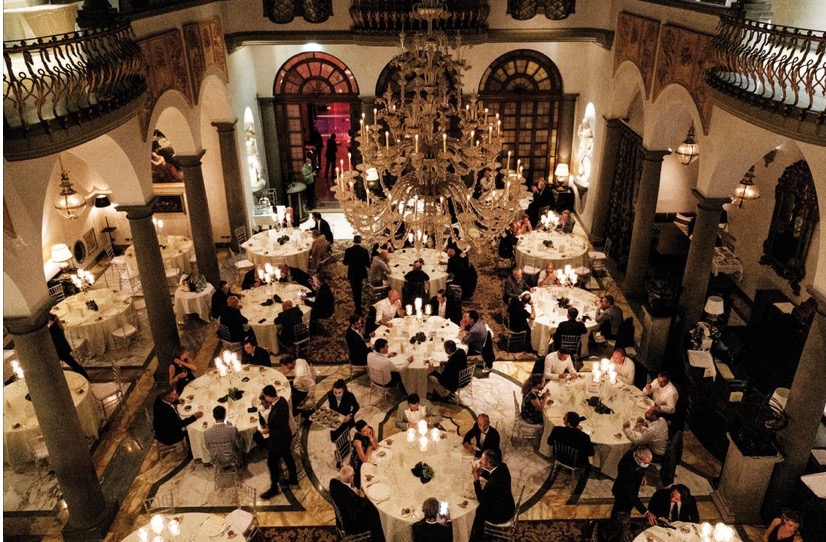 Though socially distanced, there was still elegant dining in Florence

For a more detailed report see out December 2020 issue…