The final of this year’s Swedish Racinghistoriska Cup was run during the Velodromloppet Historic GP in Karlskoga.  Postponed to 16-18 October from its usual June date, the meeting was run in very rainy autumn conditions, with everyone thankful that at least it didn’t snow!  For this and other reasons, the meeting saw the lowest grid numbers seen in years, with fewer than a hundred cars.  All the competitions this season have been run without an audience, but just like in Falkenberg, the proceedings were live-streamed.

Many participants have been lost in all the classes this year, but one of the great joys is Formula Vee, which has kept a steady and high level of participation - and what exciting races they have offered.  Lars-Gunnar “Vegas” Johansson took pole by just over a tenth of a second ahead of Johan Lund, with this year’s shooting star, Richard “Tiny” Persson, who had come to the meeting leading the championship, qualifying third.  It was these three fighting for the podium places in the final.  Lund proved strongest and won both races, meaning that he took the “grand slam”.  Winner of the Formula Vee series, he also took this year’s overall RHK title and won the National Championship for historic formula cars!  “Tiny” had to settle for second place in all three contests. 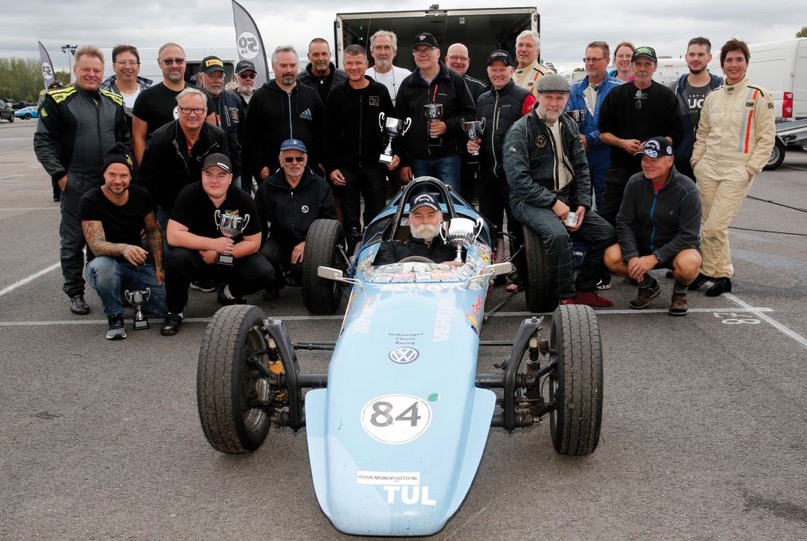 Lund also participated in the Formula Ford heats with his double-carburettor Formula Vee.  As it was raining, he had the great advantage of his rain tyres and was therefore first over the finish line in both races, while the Formula Ford drivers fought amongst themselves.

There weren’t so many slicks in Formula Slicks, where the F2s of Torgny Johansson (March 782) and Michaela Månlycke (March 812) had a hard time finding grip for all their horsepower.  Mikael Nordlander stepped forward and won both races with his F3 Ralt RT30.

The 1000cc Cup has had a tough year with many dropouts, and for the final only ten cars started.  Hans Beckert was in a class of his own in the wet conditions in his 970 Mini, finishing far ahead of teammate Torbjörn Andersson in an identical car, who was having his first race of the year.  Old rally fox Håkan Huggare took care of third place in both heats. 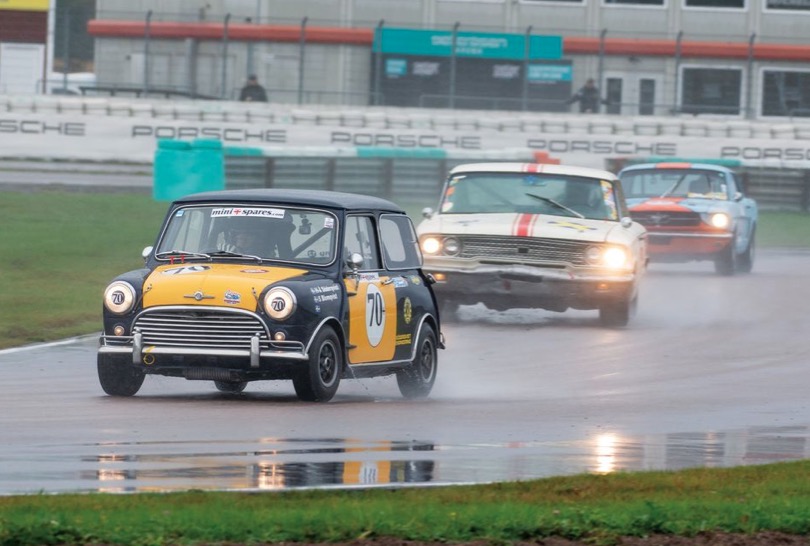 Stig Blomqvist enjoying the weather, in a Mini in the over 1000cc race

In the races for pre-‘66 GTs, Anders Schildt dominated in his Austin Healey 3000, once again beating Lars Weigl’s Porsche 911 and the MG Midget of Per Roxlin in race 1.  Sixth in the first race, Jimmy Edvardsson upset the order in his MGB in the second race, passing both Roxlin and Weigle – as well Bengt-Åke Bengtsson’s Lotus Elan - to finish second.  Claes Andersson scored a fifth place in heat 1 and sixth in heat two in his Austin Healey 3000, giving him enough points to win the 2020 GT-Sportscars title.

Two over 1000cc Saloon Car contests were topped by Kevin Bengtsson, who finished two seconds ahead of none other than Stig Blomqvist (both in Mini Coopers) in the first race.  Hans Eklund was third in his Saab Sonett II.    Blomqvist didn’t contest the second race and Jonas Pölda, who had not been in the first race, took second in his Mini Cooper MK2 ahead of Hans Beckert.

Finally, the race was on for the newer Saloon and GT cars where Anders Berger took his Ford Escort 1600 RS to two victories.