The Falkenberg Classic, organised by Sweden’s Racerhistoriska Klubben together with the Sports Car Championship, welcomed 160 drivers at the Falkenberg circuit near Sweden’s south-east coast on 19-20 September for a further two rounds for each grid of the Swedish Championships.  Bengt-Åce Gustavsson reports.

Talk of the paddock was the photo finish between Richard ‘Tiny’ Persson and Johan Lund in the Formula Vee race.  After a first win by Persson, by just 0.2 of a second in race 1, the second race also saw a battle royal between these two drivers, which ended literally in a photo finish.  However, so close were the two cars, that officials examining the photos could not pronounce a winner, so both drivers stood on the top step of the virtual podium! 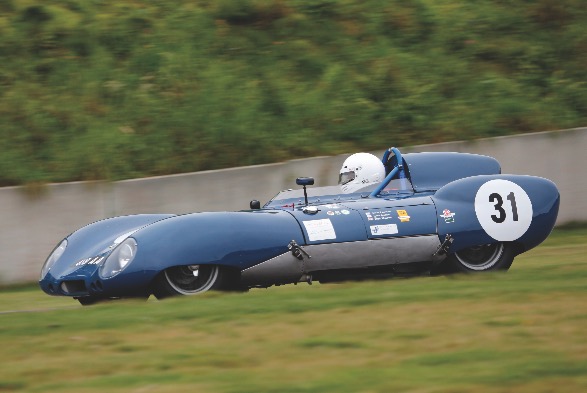 Formula Vee has taken over the role of being RHK’s largest class and such was the demand that the organiser applied for permission to increase the number allowed to start on the 1826-metre track.  Formula Slicks has also shown good starting fields this year.  Above all, there are many new F3 cars in the field.

Håkan Tagesson made his Formula Ford debut at Falkenberg.  Coming from the rally forests, he has quickly adapted to track racing and won both heats ahead of Nicklas Nilsson and Björn Otterberg in race 1 and Nilsson and Daniel Magnusson in race 2.

The older historic cars finally got an outing this year on a mixed grid for pre-war cars, F3 500cc and Formula Junior.  Hans Hillebrink in his Lotus 20 Formula Junior felt very new and modern in this field, and this was clearly reflected in the results, as he managed to lap the rest of the field twice before the finish.

Hans Beckert started in the 1000cc Cup with the Morris Cooper 970 S that burned a couple of years ago, now completely restored and in a great condition.  There was no lack of speed either and with Beckert on good form it could only end one way.

In the GT class, Kennet Persson put in an unexpected appearance with his lovely Ford GT40.  He was the fastest in the qualifiers, but had a hard time getting off to a good start in the race, allowing Lotus Elan driver Bengt-Åke Bengtsson and Anders Schildt, in his Austin Healey 3000, to get away.  Persson, however, recovered and overhauled them both as the race progressed, with Schildt holding on to second and Claes Andersson, also in a Healey 3000, getting past the Elan to take third by the slimmest of margins.

In the class for standard cars over 1000cc, it was once again Beckert and Skårner in the lead with Beckert as the winner in both races.

There was also a maximum field in the class for the newest cars with Rolf ‘The Mosquito’ Nilsson on pole with his Ford Escort RS1600.  He initially led the first race but had to give way to Anders Berger in a similar car, who had trouble in qualifying and had started further back.  However, both Berger and Tomas Hall (also in an Escort) missed the yellow flag when they lapped a back marker and thus received a penalty.  This handed the win to ‘The Mosquito’, with Claes Andersson (Opel Kadett GT/E) and the Ford Capri of Robert Paulsson next up.

Read the full report in the November 2020 issue