Masters Racing made a triumphant return to Brands Hatch in late August with a programme full of drama and spectacle, says Rachel Harris-Gardiner

Historic Formula One provided a mix of familiar cars, with some interesting newcomers, including former FIA Formula One World Championship racer, and Sky Sports F1 speaker, Johnny Herbert debuting in an Ensign N180B.

Martin O’Connell won the first race on Saturday in dominant style, piloting his Tyrrell 011B to a confident lead from pole.  Greg Thornton challenged but was not able to keep up with the charging O’Connell, and the Lotus 91/5 driver was also overhauled by Steve Hartley’s ex-John Watson McLaren MP4/1 later on.  Mike Cantillon was a fairly distant fourth in his Tyrrell 010 but started from pole in Race 2 on the reversed grid.  Thornton was determined not to be denied this time and took the lead from lap two.  O’Connell came within touching distance when the Lotus driver got caught among the backmarkers, including Johnny Herbert’s ailing Ensign. 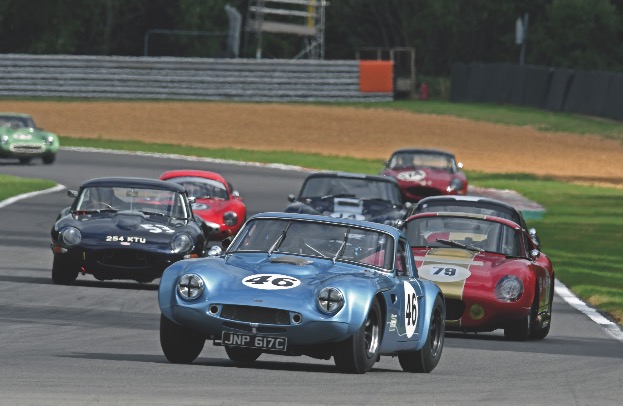 The F1 cars are always evocative but the best racing spectacle of the weekend came from the 90-minute Gentlemen Drivers race.  Mike Whitaker came back to Masters after several years of concentrating on Goodwood and won in a TVR Griffith, fending off the challenge of Julian Thomas’s Shelby Daytona Cobra, shared with Calum Lockie, and Gary Pearson’s Jaguar E-type, driven with guest pro Alex Brundle.

The fortunes of Whitaker and Brundle/Pearson were reversed for the Historic Sportscar race.  Brundle started the Lola T70 Mk3B and wasted no time in taking the lead from Jonathan Mitchell’s Chevron B19, despite Mitchell’s fast start.  Gary Culver held third for a long period in another T70 but was penalised for a jump start, and was later disqualified for failing to take his penalty in time.  The chief beneficiaries were Gonçalo Gomes and James Claridge, who were third in a Chevron B23.  Charles Allison was the leading Chevron B8 finisher in tenth place after Calum Lockie and Julian Thomas had to retire.  Whitaker, driving a T70 Mk2 Spyder, also retired. 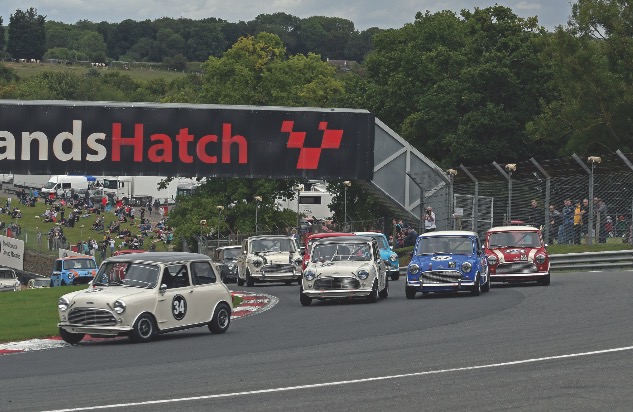 The minis put on a great show.

Saturday’s Pre ‘66 Touring Car encounter was a race of survival, won by Rob Fenn’s Ford Mustang after Steve Soper had a frightening-looking off at Stirlings in the last minutes of the race.  The throttle of the Mustang he shares with Henry Mann stuck open when in the lead, sending Soper over the tyre wall and into the trees.  Fortunately the car landed on its wheels, trapped between the Armco and the trees, and Soper emerged unscathed.

British cars were very much in evidence for both Equipe Classic races, which featured 46-car all-British grids with a queue of reserves.  Tom Smith claimed top spot on the podium for the first race in his MGB, ahead of Lee Atkins in his TVR Grantura.  Atkins also led the second race, which featured a different grid, but was overtaken by Mark Ashworth’s TVR Grantura in the closing laps. 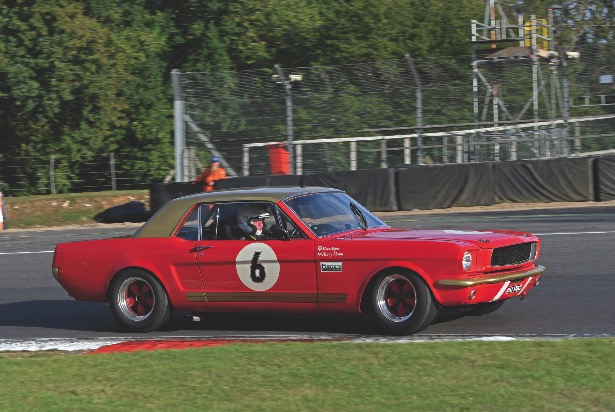 Steve Soper was unfortunate in Henry Mann’s Mustang. While in the lead the throttle stuck open in the braking area for Stirlings and the car was badly crashed, thankfully without injury to the driver

The HGPCA also provided two races, both won by Jon Fairley (Brabham BT11/19) followed by Will Nuthall (Cooper T53).  Andrew Beaumont was the fastest qualifier, but his Lotus 18 ran out of fuel in the first race.  He was another driver who fought back strongly, finishing sixth from the back of the grid in Race 2.