Inaugurated on 12th August 1921, the first event at the Spa Francorchamps race circuit was somewhat of a disappointment, with only one car turning up.  Only a few motorcycle races were held that year, and a year later, the first race for cars took place when the Grand Prix of the RACB was run over a distance of 600 kilometres.  It was won by a Belgian, Baron de Tornaco, at the wheel of an Impéria-Abadal shod with Englebert tyres, causing the “L’Automobile Belge” to proclaim, “A triple Belgian victory!”, in its issue dated 20th August 1922.  However, that was the only positive part of the coverage, as the article went on to complain that none of the other major automotive makes, such as Ballot, Peugeot, Sunbeam, Fiat or Bugatti, had been present, and not even the top Belgian manufacturers, such as Minerva, Nagant and Excelsior, sent cars.  In fact, there were a mere 12 cars at the start and three at the finish.  A regulation that excluded numerous car categories and the fact that many manufacturers did not consider the event to be of enough importance were cited as the reasons for such a feeble turnout. 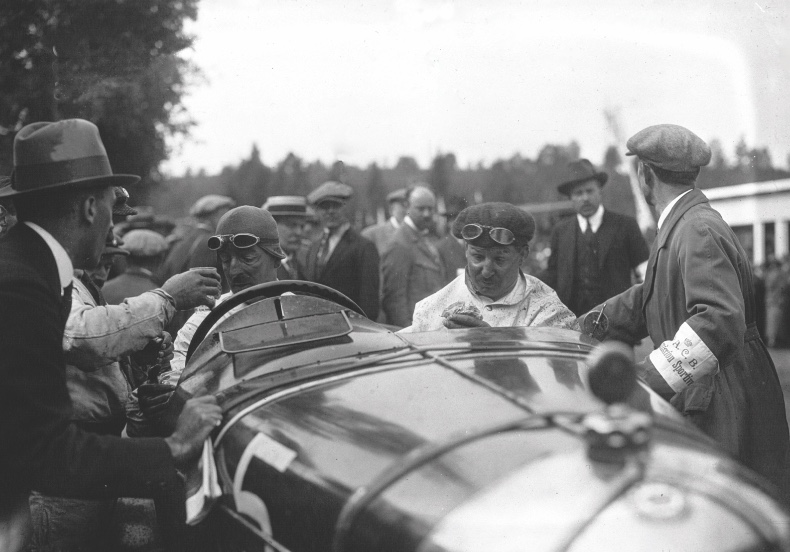 Baron de Tornaco, winner of the the 1922 Belgian Grand Prix in a Belgian-built Impéria-Abadal. His was one of only three cars to finish the 600km race

The track’s initial layout was comprised of three sections of open road, roughly forming a triangle.  With just under 15km, the circuit was exceptionally long and followed the natural relief, which entailed exciting climbs and descents, such as the Descente de Masta.  For its time it was rather fast.  It obviously included its share of sharp bends, such as la Source and Stavelot, but also long straights and fast curves.  This combination proved to be fatal for many drivers, and in 1970, the last Grand Prix was held on the original circuit.  The lap record on the old circuit, set in 1973 by Henri Pescarolo with his Matra 670B, in 3min 13.3sec, at an average of 262.41km/h, was now set in stone.

If it wanted to retain its international status, the circuit needed to become shorter and safer.  The new circuit was inaugurated in 1979.  Its length was 6.9kms, but still retained a section of open road.  It was only in 2003 that it became a permanent circuit, 7.004km in length.

While the circuit management has expressed a desire to mark the anniversary with some special events, COVID has kept them from planning anything truly big, however in nearby Brussels, Autoworld will be paying tribute to the 100th anniversary of the Belgian track with a major exhibition of cars and motorbikes that have played a role in the circuit’s history.  The museum has opted to transform the “Sport & Competition” and “Design Story” zones on the first floor into a large paddock where visitors will have the opportunity to immerse themselves in the history of the Ardennes circuit, which they count to be, “the greatest circuit in the world”.  The exhibition runs from 3 September to 28 November, so those going to the Spa Six Hours might take the opportunity to stop by for a visit.