Originally projected by François Chambelland and inaugurated in 1972, the much-loved Dijon Prenois circuit is 50 years old this year.  The first race held on the ‘Stade Automobile de Dijon-Prenois’, on 4th June of that year, was for two-litre prototypes.  The Parabolic loop was added three years later, taking the circuit to 3.8 kilometres.  By 1973, the first 1000 Kilomètres de Dijon was held, won by Henri Pescarolo and Gérard Larrousse in a Matra MS670B-Simca.  In 1974, Dijon hosted its first  Formula 1 race, won by Ronnie Peterson.  The circuit continued to host Grand Prix racing – including the Swiss Grand Prix in 1975 – until 1984 when the last Grand Prix de France to take place there was won by Niki Lauda.  Since then it has hosted almost all other forms of motorsport, including F3000, truck racing and superbikes, DTM, GT, and of course, historic racing.  It is the home of the Grand Prix de l’Age d’Or, France’s most longstanding historic race meeting. 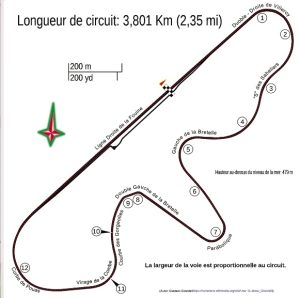 The circuit has recently undergone many improvements in both the buildings and pit areas, as well as the run-off areas and circuit surface, but remains in its early configuration.  Historic drivers love it for its challenging and undulating corners and its setting in an area renowned for its warm welcome and Burgundian gastronomy.