As in the UK, the weekend of 11-12 July saw the re-start for historic racing in Italy.  Imola was the venue and, along with the first round of the Gruppo Peroni Italian Historic Championships, the Alfa Revival Cup cars were on the programme.  Thirty cars for the Championship and 19 Alfas – fewer than usual as tentative competitors ventured out after a particularly traumatic time in Italy - were out on track at the Enzo e Dino Ferrari circuit.  Three free practice sessions gave them ample opportunity to get back into the rhythm after a long winter and a cancelled spring.

Although the drivers were greeted with hot sunshine, an unfortunate incident marred everyone’s enjoyment.  At the end of the third practice session, Andrea Manzoni of the Scuderia Clemente Biondetti suffered a heart attack while slowly driving back to the paddock and, although promptly rescued and transported by helicopter to the Maggiore hospital of Bologna, the Florentine driver sadly could not be saved.  When the terrible news arrived in the paddock, it created much emotion, but the drivers took the decision to honour Andrea’s immense passion for motorsport by carrying on with the race weekend, though the mood was understandably less buoyant than it would have otherwise been at the re-start of racing after such a long hiatus. 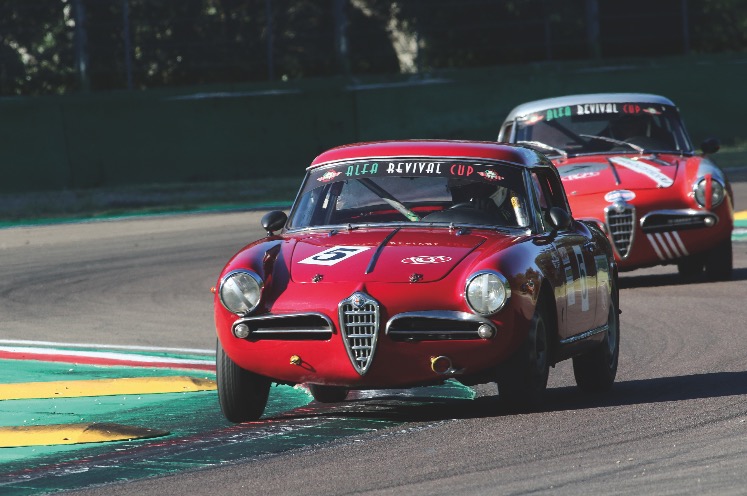 A very tight qualifying session, especially at the sharp end, took place with a summer thunderstorm rapidly approaching the circuit.   Davide Bertinelli and Antonio Crescenti took pole in a GTAM, but only 4 thousandths of a second ahead of the GTA 1600 Group 4 of Giovanni Serio and Francesco Pantaleo.  Third was German Jürgen Ludwig in a beautiful GTA 1600 Group 2.  In the GT Veloce 2000cc Group 1 class Luigi Mercatali was the one to beat, followed by Andrea Guarino/Bruno Ferrari.  Amongst the oldest cars of the field, the Giulietta Spider Veloce of the Renzo and Raffaele Raimondi father and son team would start in front. 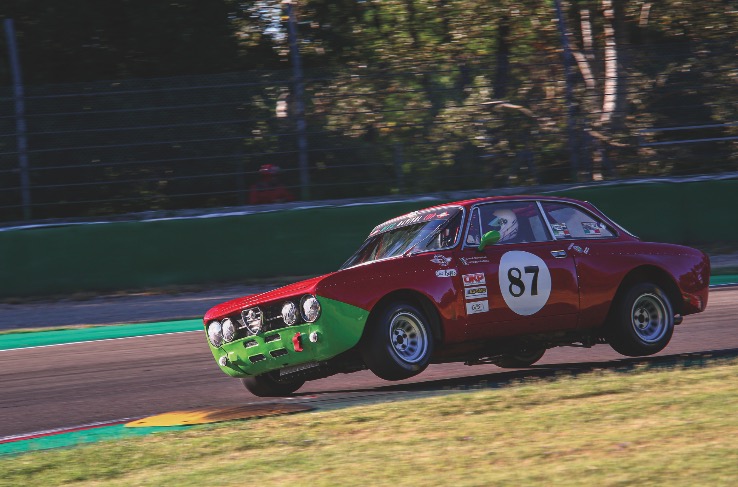 Davide Bertinelli and Antonio Crescenti took pole in their GTAM with some spirited driving, and easily won the race when their main opposition faded

As the green lights went on and the  60-minute race  began, the first one to fall was the GTAM of Umberto Bartolucci who retired with an engine problem and, on the second lap the same thing happened to the Alfetta GTV 6 of Amerigo Bigliazzi/Bruno Mazzuoli.  The retirement of the Serio/Pantaleo car on lap six robbed the race of the only serious rival to Bertinelli/Crescenti, who increased their margin to the end.   Another German driver, Michael Vos in a GTAM, had to start at the back of the grid due to technical problems in qualifying.  Had he started at the front, things may have been different.  As it was, he worked his way through the field to finish second.   Ludwig, having lost many positions at the start, came back to finish fifth.  An excellent performance by Roberto Restelli and Luigi Panini confirmed their third place achieved in qualifying, while Mercatali held on to the GTV Grp 1 class, followed by Gimignani. 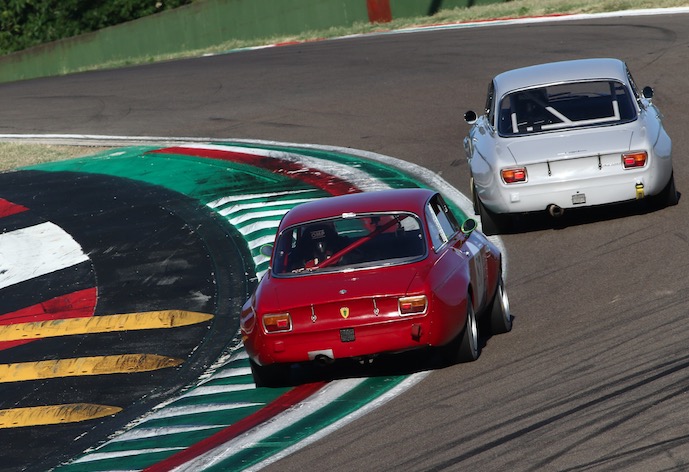 The all-important Index of Performance victory went to Roberto Lonardi and Romolo Raimondi in a Giulietta Spider Veloce after Renzo Raimondi was given a 25-second penalty for colliding with the Giulietta Ti of Marco Milla on the last lap.

Denny Zardo and Giovanni Ambroso took overall honours and class 4 in the Italian Championship in their BMW 323i, while Riccardo Lodi took the ‘60s win with his 1300 Alfa GT.