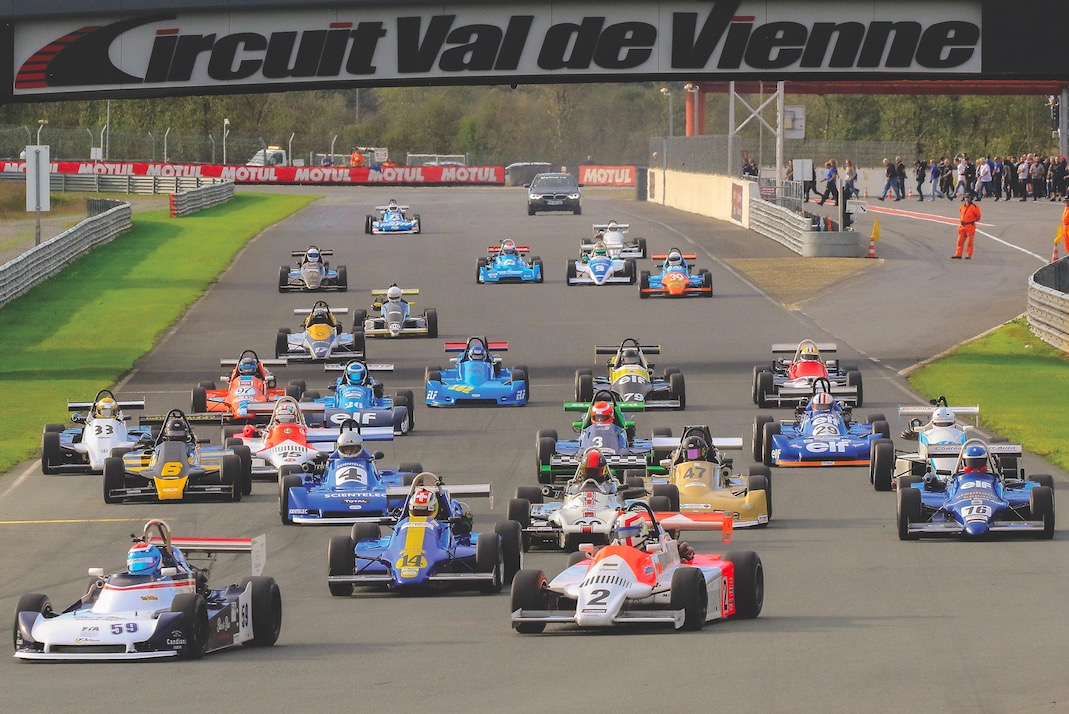 In the case of the monoplaces contest, reigning champion Rouvier flew from all the opposition to secure two F3 Classic wins in his Martini Mk34, while Dousse spun out of contention in the first of two Formula Ford Zetec races, handing the title to his rival.  The second race in particular was fraught for Rouvier, who needed to keep his head through three safety car interventions, the last releasing the grid for just one lap.  Followed home in both races by Eric Martin’s Alfa-engined Martini MK 39, Ian Jacobs drove his Ralt RT3 to third place in race 1, but retired from race 2.  On the shared grid with Formula Renault, it was Swiss driver Christian Vaglio-Giors who remained in the lead of the division throughout race 1, even mixing it with the F3s in the early laps, but he ended race 2 in the gravel trap, leaving victory to Charles Gerbout. 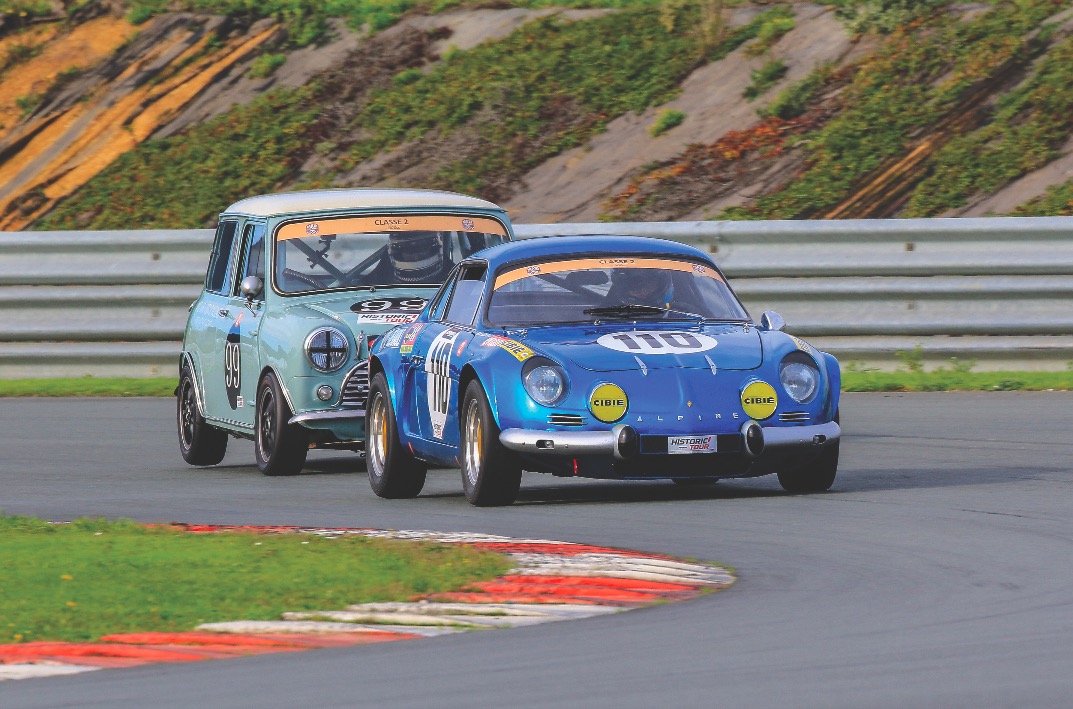 In the GT/Tourisme category Didier Gruau likewise scored two ASAVÉ 65 wins in his TVR Griffith 400 to finish on the same points as Franck Quagliozzi, who also won both rounds of the Youngtimers Cup.  The pair finished on equal points, but the title went to the earlier car after the only other driver in with a chance, Xavier Jacquet, had to leave the circuit and miss his second race due to a family emergency.  Gruau started on pole and fended off the attentions of José Beltramelli’s Corvette, while the two Erics, Perou and Etienne, battled for third in Austin Healey 3000 and Jaguar E-type respectively, the verdict going to the latter - just - in the first of two races run on Sunday.   With a finish only four-tenths of a second ahead of the Corvette, Gruau set out from the front in race 2 with the intention of carving out a gap to the American car, now raced by José’s son Brady Beltramelli.  Gruau paced himself to finish five seconds ahead, while if anything the battle for third was even more furious between Perou and Etienne, this time with Perou snatching the place at the last minute. 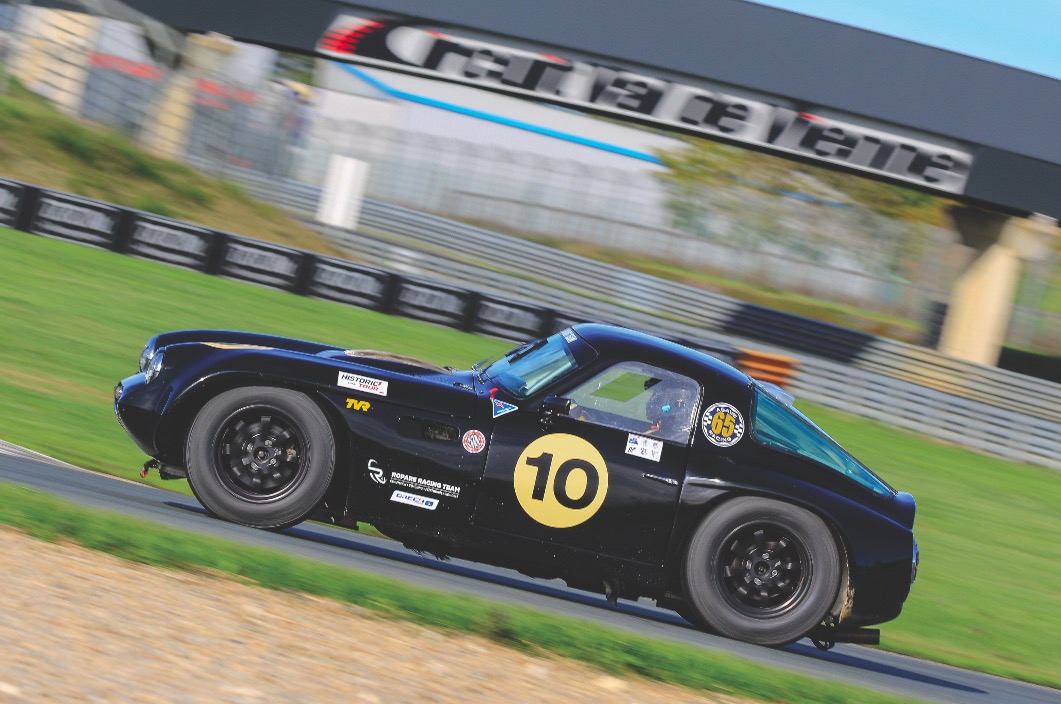 Didier Gruau won both ASAVÉ 65 races driving his TVR Grif th 400 to  nish on equal points with
Franck Quagliozzi in the GT/Tourisme championship. The driver of the older car took the 2019 title

The Maxi 1300 races saw a continuation of the ongoing battle between Jean-François Besson (Alpine A110) and the Austin Cooper S of Laurent Majou-Rosinoer.  Having beaten the Mini to the flag in the first race, Besson started the second from the pits due to a broken engine support.  By the second lap he was in seventh place (of 21 starters) and another good fight looked to be in prospect.  However Majou-Rosinoer retired on lap three and, after a good scrap between the CG Coupé of Laurent Poirier and Jean-Pierre Destombes’ Spider version, and the two Marcos of Tomy Gruelles and Vincent Kraus, Besson calmly passed the lot to take his second win.

Jean-Baptiste Chateaux took his Lucchini P3 to victory in the first of two SportProtosCup rounds, ahead of his brother Matthieu driving the BMW-motivated Debora SP91 after the latter had an unscheduled pit stop.  Fighting his way back past Françis Dougnac (Epsilon Alfa) and Guillaume Gagnard (Norma BMW), Matthieu was still 20 seconds behind the Lucchini when the flag fell.  Starting the second race in finishing order, the Deborah was soon out front and later the Lucchini of Jean-Baptiste slowed, allowing Dougnac past for second.  Louis Kolly drove his Lola T292, the oldest car on the grid, from last to third. 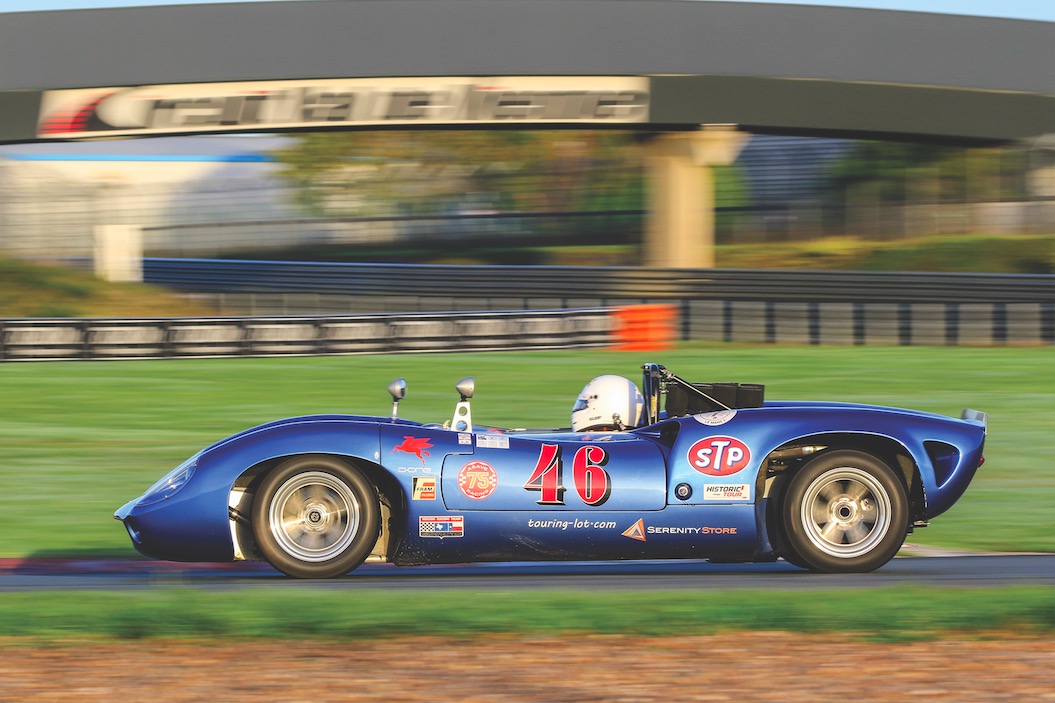 After his ASAVÉ 65 efforts, Eric Perou was out again in the ASAVÉ 75 races, the qualifying for which had been dominated by the 911 RSR Porsches of Ghislain Gaubert and Emmanuel Brigand.  But the Chevron B8 driver soon had the measure of these and took the lead, with the Elva MK8 of Yann Le Calvez (Elva Mk8) forming the back of a four-car train.  Le Calvez, in an over-optimistic outbraking manoeuvre ended up in the gravel trap, causing the safety car to enter the track.  Perou lost out to Brigand at the re-start, which came too late for the B8 driver to regain his place before the chequer.  The train continued for race two, with places changing amongst the top four until Jean-Marc David’s Lola T70 Spyder left the track and brought out the red flag and a premature end to the race.  At that point Perou was in the lead, and in any case Brigand and Calvez were both penalised, dropping them down the order.

The newest addition to the series that qualify towards the French Championship is the Youngtimers.  So successful in other countries, they seem unable to produce a viable grid in France and share their track time with the Mazda MX5 one-make Roadster Pro Cup series, which made up two-thirds of the 33-car grid.  Winner of two races was championship contender Franck Quagliozzi, driving his Honda Civic, while the Mazdas were headed twice by Florian Cabarrou. 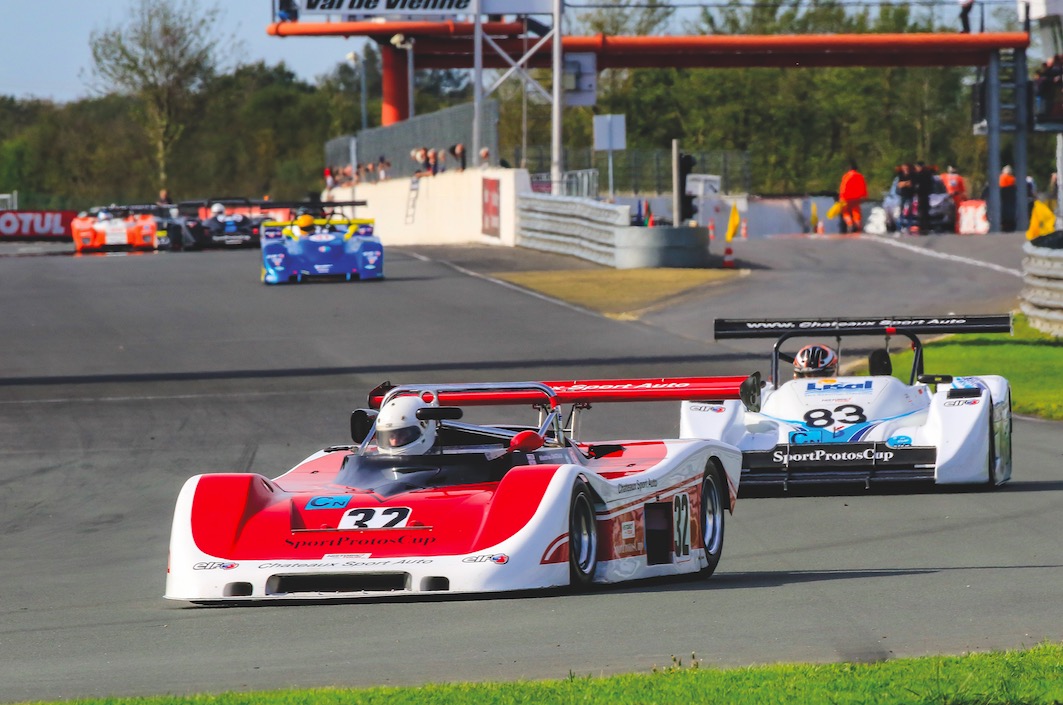 The first of two Formula Ford races was run over just two laps, after a red flag incident took most of the allocated race time to resolve.  The second race, however, was pure Formula Ford, with place-swapping all the way through.  Initially led by François Belle, until he had to stop for a drive-through penalty for a jump start, the field was then left to Alain Girardet and Gislain Genecand, the two Swiss passing and re-passing at the front ahead of Irishman Nicky Gibson.  The latter spun away his chances, while in the meantime Belle was making his comeback to third place.

In general this year’s Historic Tour has been judged by its organisers as a success, however it can’t be denied that some categories are struggling for entries.  Indeed most categories share track time with other series to make up enough numbers.  It is particularly disappointing to see, for example, the ASAVÉ pre-‘66 grid with only 15 entries when other grids with the same eligibility criteria are full, both at club level and at international level.

For a fuller report see our December 2019 issue