“I’ve never started last and won before. It was an amazing race,” said Will Leverett after his
famous victory in 70s Road Sports with his father’s Lotus Elan.  Photo Eric Sawyer

Though Jackson was twice headed by Richard Tarling in Historic Formula Ford, he was still able to clinch the title with two second places. “I don’t mind losing to Richard, he’s always quick and he’s a very good driver and good fun to race with,” said Jackson.

Meanwhile, a double win assured Langridge the Classic F3 title. “I wanted to win the title by winning races,” said Langridge after an excellent day.  “However, it was down to hard work by Dan Eagling’s Lifetime Racing as an oil seal failed in testing on Friday and the team had to take the gearbox out to sort the problem.”

In an ambitious 12 race programme for their annual visit to the Kent circuit, six categories each had two 15-minute races, allowing spectators the opportunity to watch from two different vantage points around the popular short circuit. 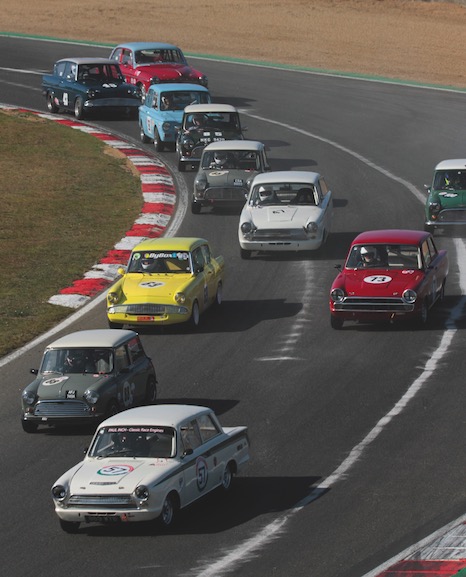 Mark Martin in his Lotus Cortina clinched victory in both Historic Touring Car races but left it late in the second race after passing Richard Belcher at Clearways
on the final lap when the former leader went in just too deep. “I didn’t think that through,” said Belcher. “I just went in a bit too quick.”  Photo Charlie Wooding

Jeremy Clark’s Lotus Elan was only 0.003secs up in qualifying for ‘70s Road Sports, with Charles Barter in his Datsun 240Z and the top five covered by 0.8 of a second.  In race 1 Barter, Dave Karaskas (TVR 3000M) and John Williams (Porsche 911SC) put on a show of close racing in widely differing cars. The second race saw Williams take an early lead from Barter, as Will Leverett came through the field from the back having taken over father Mark’s Lotus Elan S4. The youngster flew up the order to catch the battling lead pack, then, as Barter parked the Datsun, picked off his remaining rivals one by one to score a famous victory. “I’ve never started last and won before. It was an amazing race,” said Will.

A healthy grid of 24 Historic Formula Fords saw some very close racing with  Cameron Jackson (Winklemann WDF2) nosing in front of Richard Tarling, in his Jamun T2, only 0.086secs separating them at the finish.  The gap at in thwe second race was 0.4 of a second.  Two second places were enough to clinch the title for Jackson. Classic Formula 3 was supplemented by Classic Formula Ford 2000 to produce a reasonable 15-car grid with Steve Maxted (Ralt RT3) being beaten off pole by fellow front row sitter Adrian Langridge in a March 803.  Maxted harrassed Langridge at the front until slight contact at Druids dislodged the Ralt’s front wing causing him to drop back to 3.9secs behind at the finish. 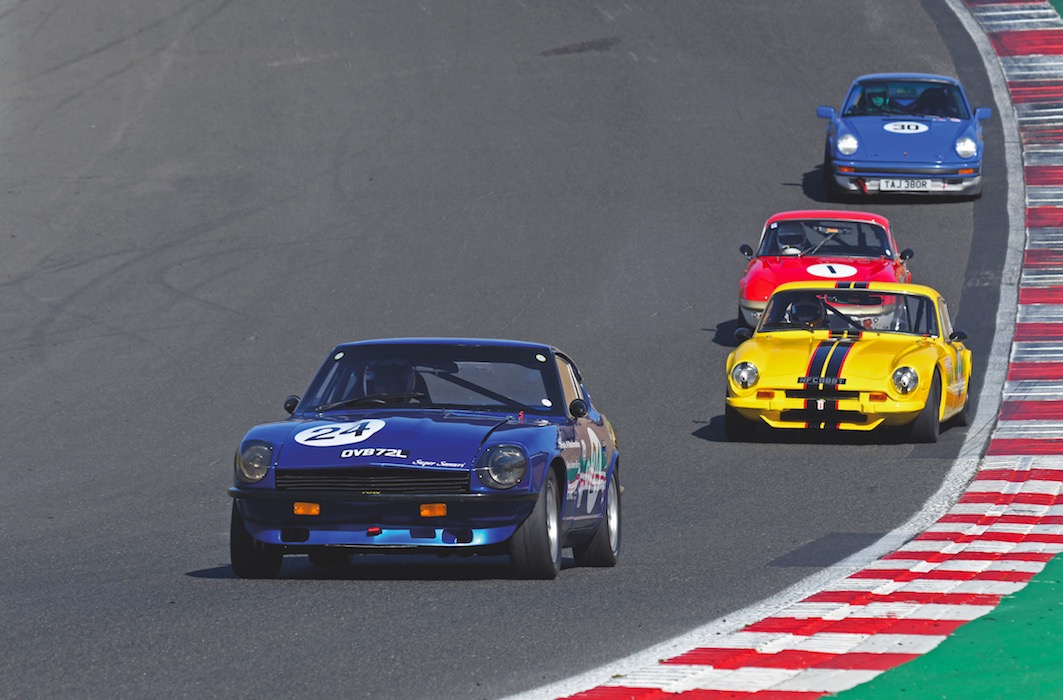 The perennial Charles Barter won the rst 70s Roadsports race in his Datsun 240Z, but suffered engine woes in the second

A good 23 starters for Historic Formula Ford 2000 were headed by Nelson Rowe’s Reynard SF79, by 0.076secs from Jason Redding’s similar car. Rowe led until Andrew Park (Reynard SF81), having started from sixth spot found a way past into the lead which he held until the red flags came out on lap 13 following at least three cars off the increasingly slippery surface.  On count back Ian Pearson (Royale RP30) was second with Rowe third. The second encounter saw Park in the lead followed initially by Rowe until lap 5 when Pearson snatched second, the order being maintained to the flag. 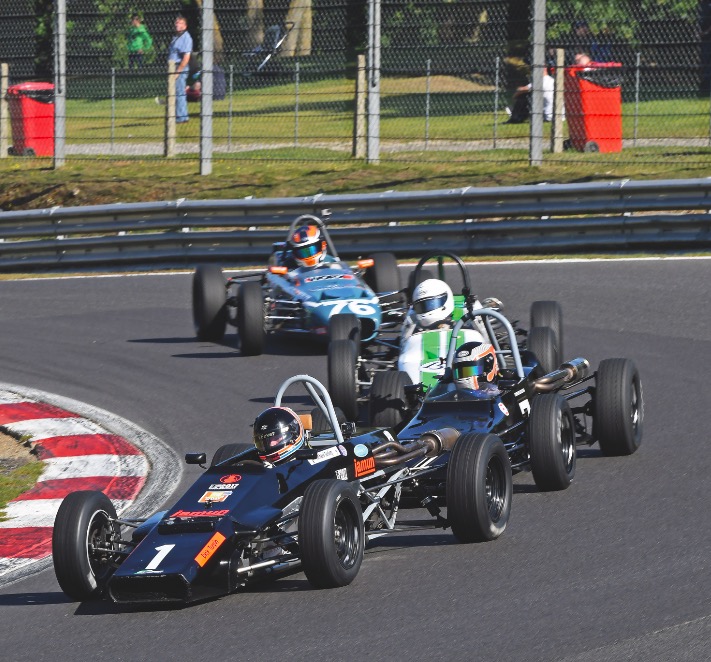 Richard Tarling was best of a 24-car Formula Ford grid, but the nishes in two races were very
close and, after placing second in both heats, Cameron Jackson went home as the champion

The final race on the programme was for Historic Touring Cars with a grid headed by Mark Martin in his Ford Lotus Cortina from Richard Belcher’s similar, but 2-litre example, and Nick Paddy’s Austin Mini Cooper in third. Martin was straight into the lead followed by Roger Stanford from the second row and Belcher, who soon found a way past Stanford’s Cortina and settled into second place.  With four cars off on the opening lap of the second race and only one able to continue there was another red flag.  At the restart Belcher used the power of his 2-litre engine to take the lead from Martin and Stanford.  Further back there was an excellent scrap for fourth, which eventually fell to Bullen’s Anglia ahead of battling Minis and Cortinas.  Belcher was caught on the last lap through Clearways by Martin who won by 0.2secs on the run to the line. 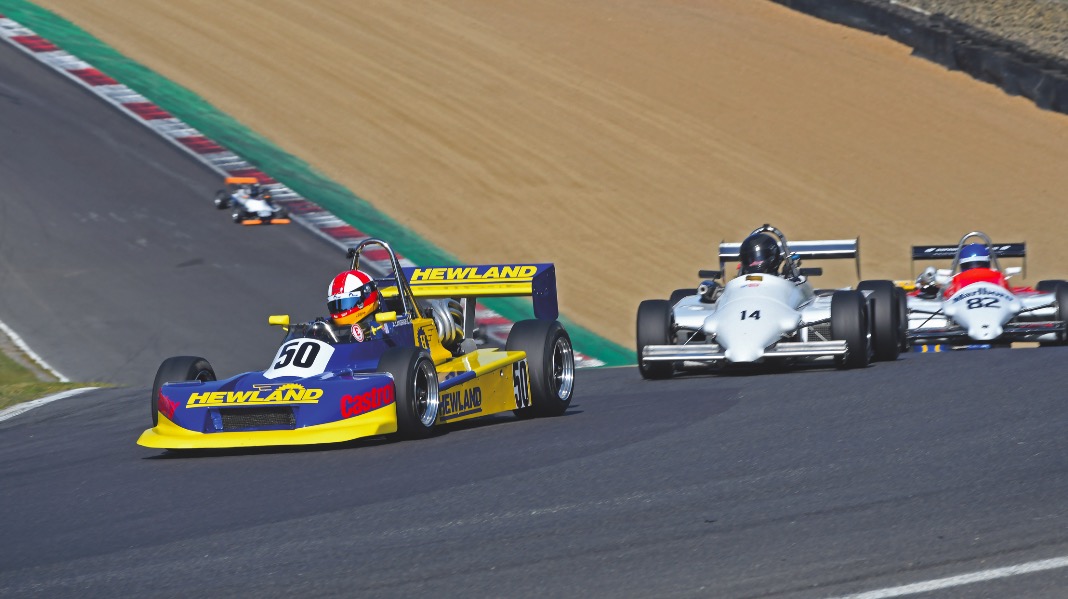 Adrian Langridge won both F3 races in a March 803

For a full report see out November issue